Commentary: Browns have all the tools to Hammer out a season to remember 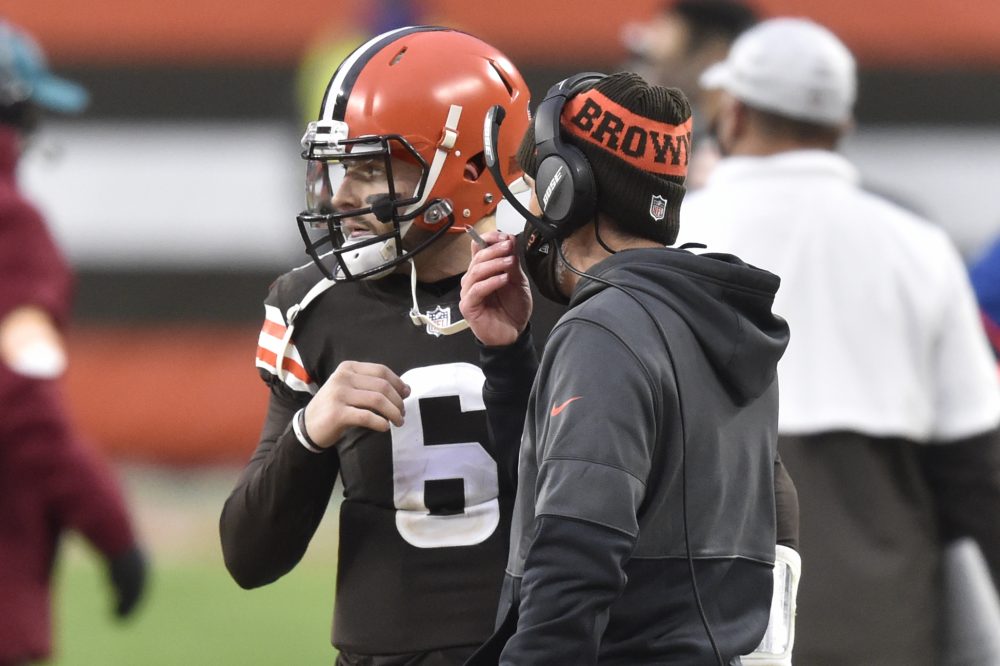 Now that the future Guardians have so graciously relinquished the stage, the sporting spotlight in Cleveland shifts to the fabulous Baker Boys, who are chomping at the bit to begin chomping on a league that laid an 0-16 whupping on their sorry hindquarters a mere four years ago.

All bills eventually come due, however, so that knocking you hear on the NFL’s door comes from you-know-who.

As the countdown to Browns-Chiefs II officially begins, here are some idle thoughts, comments and observations about what, on paper, appears to be the Browns’ best roster since Jim Brown was leaving tire tracks up and down the chests of linebackers from coast to coast:

Will Jamie Gillan even be needed? Will the Browns ever punt? Hopefully, but only for this reason: I need to hear the words “The Scottish Hammer” — the greatest football nickname since Red “The Galloping Ghost” Grange — at least once every game.

It took general manager Andrew Berry just one offseason to turn the Browns’ offensive line from one of the worst in the league to the best. This past offseason he appears to have repeated himself, this time on the defense. All of it.

Demetric Felton falls asleep studying the playbook, wakes up ready to play running back or receiver and just wants the ball

Meanwhile, name an offense harder for an opposing defensive coordinator to game plan for than the Browns. They have two Pro Bowl running backs, stylistically different but menacingly the same: They don’t absorb blows, they deliver them.

Their offensive line has Pro Bowl-caliber performers from tackle to tackle. Their receivers have elite speed, size, strength, hands and yards-after-catch ability.

Their quarterback has just the right amount of moxie and cocky, elite accuracy, instincts and leadership ability, all leveraged by a well-honed chip-on-the-shoulder attitude that feeds off his like-minded fan base. All of it is the perfect storm for a perfect — not undefeated, but perfect, if you get my drift — season.

Their head coach/offensive play caller checks all the boxes for all the things all teams in need of a coach are seeking. He checks all of them, and the Browns have all of him. Kevin Stefanski has a chance to become the best Browns coach since Paul Brown.

Last year the Browns overcame — you can say “flourished” and I wouldn’t argue with you — the loss of Odell Beckham Jr. This year, he and his blinding speed are back. Hopefully that doesn’t mean Baker Mayfield will obsess about immediately getting the ball to Beckham at the start of games this year, as appeared to be the case last year.

My guess is that won’t happen this year because the two principals, Mayfield and Beckham, having seen last year that the Browns could still win big without Beckham, will make the necessary adjustments to help the team win even bigger with a more refined Beckham.

That said, the one player the Browns cannot afford to lose to injury is obviously Mayfield. Especially this year, which is supposed to be THE year. Mayfield has been remarkably durable in his three years on the job, given his relatively modest frame. That must continue.

Case Keenum is an able backup, and Stefanski is a great coach, so an injury to Mayfield would be a game-changer, but not a season-ender for the Browns. Not with THAT roster.

What’s easy to forget with a roster as deep and talented as the Browns is that because it’s that deep and that talented, that depth and talent serves as an insurance policy against the loss of one or more key players.

But for this Browns team to maximize its seemingly limitless potential, all the key parts need to remain in place all season. That doesn’t happen very often in the NFL, but that doesn’t mean it can’t happen.

You’d like to believe that after all this, after all the losing the franchise has endured this century, that when fate finally deals a loaded hand to the Browns, one with wall-to-wall impact players on both sides of the ball, a general manager who knows how to general manage, plus a coach and a franchise quarterback the team and the town have been waiting for forever, that all of it would be allowed to coalesce into what it should become.

This year, finally, the vibe meter feels like it’s fueled by fact, not fantasy.

You read it here first.