Mailbag: Where do Andrew Billings, Malik McDowell, Johnny Stanton IV stand in fight for roster spots? Any vets likely to be dealt? 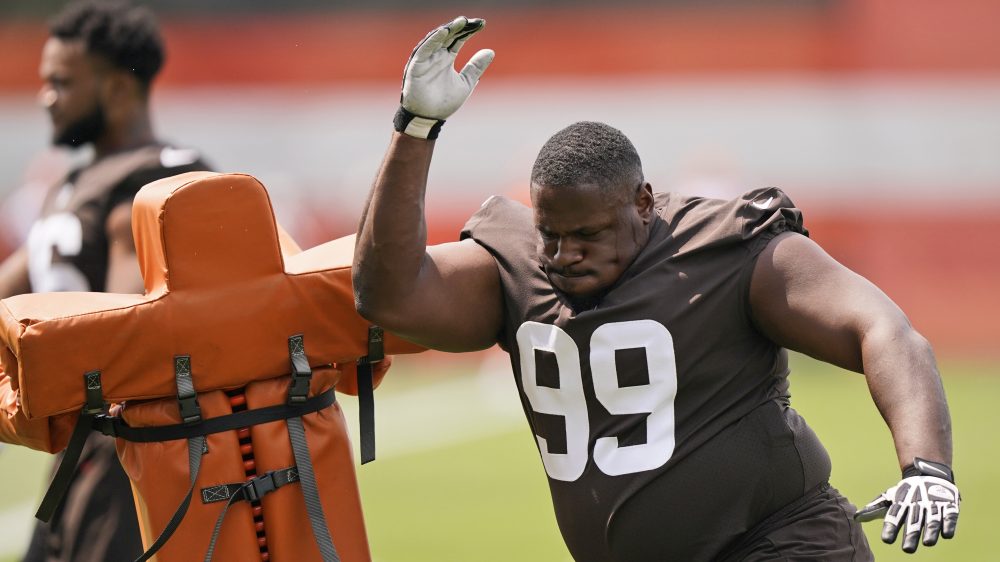 Q: You’ve been promoted to Browns GM. Are you keeping Andrew Billings or Malik McDowell if one has to go? Are you keeping Johnny Stanton IV as a hybrid TE? Is Rashard Higgins making the team? I know it’s three questions, but I did give you a serious promotion.

A: That’s a big-time promotion. I’ll take it, and the salary bump. So here you go.

I’d take Billings, but barely. The Browns don’t have another player on the roster who fits the role of true run-stopping nose tackle, and he’s a safer pick than McDowell, who’s had a series of off-field problems and hasn’t played in five years. But I acknowledge McDowell’s upside is much higher. I actually think both make the 53-man roster.

5 things to watch in preseason finale vs. Falcons … besides Baker Mayfield

I’ve spent a lot of time thinking about Stanton’s chances. I certainly wouldn’t rule out him sticking in the hybrid role, but Andy Janovich is better as a true fullback and the Browns should be able to bring back Stanton on the practice squad.

I’d be stunned if Higgins doesn’t make the team. I wouldn’t call it an absolute lock, but I’d put the chances at 90-95 percent. He makes too many plays and has undeniable chemistry with Baker Mayfield.

Q:
The statement that the Browns will play “select starters who need reps” in the Falcons exhibition game seems too arbitrary for our data-driven Browns. What might’ve driven the decision on who will play? Could this be a sort of extra homework assignment for those athletes not grading out well enough in practice?

A: I’ve been struggling to explain this decision. Even if Kevin Stefanski always planned to play Baker Mayfield and others in the preseason finale, it runs counter to the cautious approach taken throughout training camp and the preseason.

The Browns have loads of data tracking the number and intensity of the players’ reps, but I don’t believe the potential benefits from a couple of preseason series two weeks before the opener outweigh the injury risks.

I don’t think the playing time is punishment, just more about getting a handful of guys on offense and defense some game-speed reps.

Q: Are there any established veterans that, despite being productive, are likely to be traded because the rookie behind them is so tantalizing (and affordable)?

A: I don’t know if I’d say likely. But there are a few guys who fit this scenario: receiver/special teamer KhaDarel Hodge, linebacker Mack Wilson, offensive lineman Chris Hubbard and Billings.

Rookie Demetric Felton could squeeze out Hodge as the sixth receiver who has a large role on special teams.

Wilson has had a strong camp and projects as the Week 1 starter on the weak side, but second-round rookie Jeremiah Owusu-Koramoah is behind him and the organization loves his skill set. The Browns also have veteran Malcolm Smith if they get a quality offer for Wilson.

I expect Hubbard to make the team, but rookie fourth-rounder James Hudson III is behind him and has been training at both tackle spots.

We covered Billings above.

Q: Do you see the Browns making any trades to pick up some draft picks?

A: I do. It’s so hard to predict exactly which players would be involved, but the deals would figure to come from positions of strength. For the Browns, that’s receiver (Hodge, or possibly Higgins), offensive line (Hubbard, Drew Forbes or Greg Senat) and defensive tackle (Billings, Jordan Elliott).

For the first time in a long time, the Browns have a deep enough roster that other teams want their castoffs, and they should be able to capitalize by adding a draft pick or two.

The hamstring injury that sidelined him until he returned Friday was a setback, so I wouldn’t guarantee the roster spot. But he’s got a lot going for him.

He can play in the slot, he’s gotten work at safety, which is important given Grant Delpit’s lingering hamstring injury, and coordinator Mike Priefer called him a core special teamer. I expect the Browns to keep 10 defensive backs, with Stewart as the sixth corner/fifth safety.

Mailbag: Will Browns trade players for picks before season? Is Baker Mayfield worth huge payday?
Mailbag: How will Joe Woods’ defense look different in Year 2? Who takes preseason awards? Which AFC contender has most pressure?