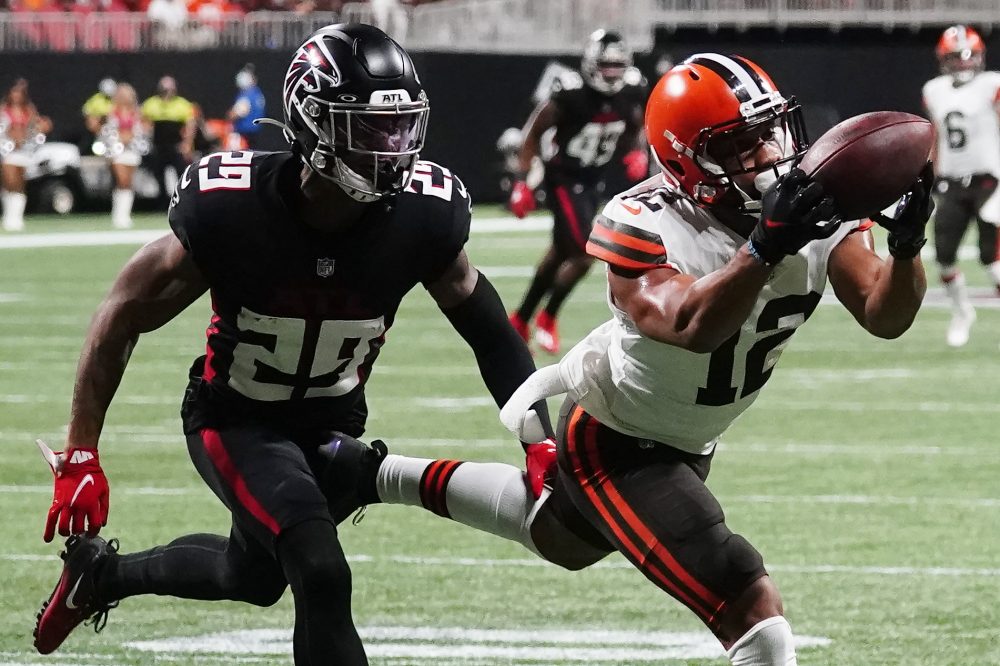 Defensive tackle Malik McDowell completed his improbable comeback Tuesday by making the Browns’ initial 53-man roster. He was a second-round pick of the Seahawks in 2017 but never played in the NFL after a serious ATV accident and a series of legal troubles.

The Browns took a chance by signing McDowell (6-foot-6, 295 pounds) in May and he earned a roster spot with a strong finish to the preseason.

All eight of the draft picks made the team, including fifth-round linebacker Tony Fields II, who missed nearly all of training camp with a foot injury.

The seven picks from general manager Andrew Berry’s first draft in 2020 also made the team.

“The rookies are players we identified throughout the draft process last year that not only were talented but fit our smart, tough, accountable culture,” Berry said in the news release. “While they did show growth over the past weeks, all of them know they still have room to grow and areas to work on so they can be viable contributors throughout the season.”

Analysis: Cuts are coming, so here’s a final prediction of the 53-man roster

The roster will be tweaked in the next few days, including linebacker Jacob Phillips (torn biceps) being sent to injured reserve, but setting the initial 53 involved some interesting decisions.

Receiver/special teamer KhaDarel Hodge, defensive tackle Sheldon Day, fullback Johnny Stanton IV and linebacker Elijah Lee were among those cut. Day and Lee are vested veterans, so they don’t have to go through waivers.

Hodge could be viewed as a surprise given his strong preseason that included two touchdown catches in the final two games. But he was due to make $2.13 million this year and was behind Odell Beckham Jr., Jarvis Landry, Donovan Peoples-Jones, Rashard Higgins and rookie Anthony Schwartz on the depth chart.

The Browns, according to a source, hope to bring back Hodge if he clears waivers, which isn’t a certainty. They could then pay him less. He had 11 catches in nine games last season, which he opened as the No. 3 receiver.

Day had a good camp but was released. He got caught up in the crowded tackle position.

Stanton, who worked as a tight end some during the preseason, is a candidate to return to the practice squad if he clears waivers.

The Browns are going with three tight ends, at least on the first 53-man roster: Austin Hooper, David Njoku and Harrison Bryant. Coach Kevin Stefanski uses two- and three-tight end formations a lot, so at least one is expected to be signed to the 16-man practice squad.

The Browns kept 10 offensive linemen and eight defensive linemen, but only three true ends. They seem likely to add one before the opener Sept. 12 in Kansas City.

They also kept kicker Chase McLaughlin but could replace him.

“It’s the initial 53, it’s not necessarily the final 53,” Berry said. “There are certain injury situations, certain position groups where you are still juggling the dynamics over the course of the next several days.”

Twenty-two of the 25 players on offense were with the team last year. The new faces are rookies Schwartz, running back/receiver Demetric Felton and lineman James Hudson III. The defense was overhauled in the offseason and has 12 new players plus Billings, who opted out last season.

“Roster decisions are always a combination between the front office and the coaching staff making sure it’s not just the most talented 53, but the right 53 to serve the different roles we need on offense, defense and the kicking game throughout the season,” Berry said.

The Browns are also expected to sign quarterback Nick Mullens to the practice squad later Tuesday, NFL Network reported. The Browns cut No. 3 quarterback Kyle Lauletta on Monday and needed to fill the role.

Mullens was cut by the Eagles over the weekend after they traded with the Jaguars for Gardner Minshew. Mullens, 26, spent the last three seasons with the 49ers. He went 5-11 as a starter, completing 64.5 percent with 4,714 yards, 25 touchdowns, 22 interceptions and an 87.2 passer rating.

Lee played eight games with the Browns a year ago and was a key contributor on special teams.

Placed on reserve/suspended by commissioner: