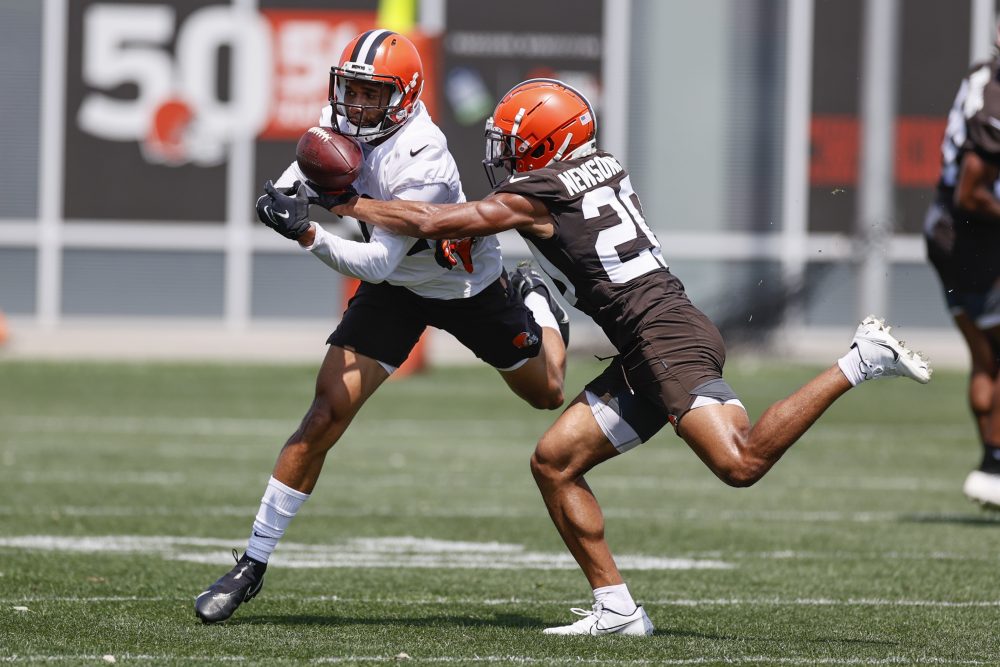 BEREA — The Browns signed a familiar face as a fourth defensive end, brought back 10 players on the practice squad they had cut Tuesday and watched a couple of guys get away as roster shuffling continued Wednesday.

Defensive end Joe Jackson was re-signed to the active roster after being cut Tuesday and clearing waivers. The Browns kept only three true ends on the initial 53-man roster.

He took the roster spot of second-year linebacker Jacob Phillips, who as expected was placed on injured reserve. Anyone placed on IR from this point forward must miss three games, and the team is optimistic Phillips will be able to return before the end of the season. He suffered a torn biceps Aug. 19.

“He has had surgery, he’s rehabbing here and then hopefully he attacks his rehab like I know he will and see where we are as he gets healthy,” coach Kevin Stefanski said after practice.

Malik McDowell grateful to make team after difficult journey, vows to not let down Browns for taking chance on him

Returner/receiver JoJo Natson, defensive end Porter Gustin and linebacker Elijah Lee were among those re-signed to the practice squad.

Receiver KhaDarel Hodge was claimed by the Lions. He was waived Tuesday by the Browns during the cut to 53.

The Jets signed safety Sheldrick Redwine to the active roster. He was a fourth-round pick of the Browns in 2019, started eight games in two years and was cut Tuesday.

The Falcons claimed guard Colby Gossett, who was waived Tuesday.

The first practice squad moves for the Browns were almost exclusively re-signing players who were in training camp with them.

The exception was quarterback Nick Mullens, who was cut over the weekend by the Eagles. Mullens, 26, spent the last three seasons with the 49ers. He went 5-11 as a starter, completing 64.5 percent with 4,714 yards, 25 touchdowns, 22 interceptions and an 87.2 passer rating.

“The thinking is get a quarterback in here, take a look at him,” Stefanski said of Mullens, who practiced. “He has some prior experience in this system. (Offensive assistant) T.C. McCartney was with him in San Francisco, so had some intel on him as a person and a player.”

Natson was the returner to start last year before suffering a torn anterior cruciate ligament.

“I got to talk to a bunch of those guys yesterday, and you really do want what’s best for them,” Stefanski said. “So if guys land on another 53, you’re happy for them. When they don’t, you want them to be here because we know them. We feel like we’re a big part of their development.

“I feel like they can get better here, so it is great to see a bunch of faces back out there.”

The Browns have five open spots on the practice squad. They didn’t claim anyone off waivers.

When cornerback Denzel Ward missed a couple of weeks in training camp with what he described as general soreness, he kept working on the side and never lost sight of what’s really important.

The Browns open in Kansas City on Sept. 12, nearly eight months after their season ended there in a 22-17 divisional round playoff loss. Ward had missed the previous two games with COVID-19 and looked bad giving up a touchdown to Chiefs All-Pro tight end Travis Kelce.

“I feel I wasn’t as sharp as I would have wanted to be,” Ward said. “Coming off of COVID, it was a little difficult, but I was still ready. I was out there playing, so I was ready, I gave my best shot that I could. But I’m definitely looking forward to this opportunity that I get coming up.

“Probably wish that some plays would’ve went differently than they did. But I was still ready to play and I’m going to be ready to play come gameday.”

Running back Nick Chubb is a huge Batman fan, and the Chubb Crunch cereal box has a Batman theme at his request.

He was asked Monday at an appearance at Heinen’s that if he’s Batman, what superheroes are his teammates? He named quarterback Baker Mayfield, defensive end Myles Garrett, receivers Odell Beckham Jr. and Jarvis Landry and running back Kareem Hunt.

Chubb said Wednesday he hadn’t received any feedback from teammates.

“I know where I’m at, but I don’t really care,” he said. “It doesn’t really matter to me that much.”

He also said he has no personal goals.

“I just want to win games for Cleveland,” Chubb said.

Stefanski said he expects Tretter, who’s played every snap the last four seasons, to be ready to play the Chiefs.

** Receiver Rashard Higgins was excused for the second straight day for a personal reason.