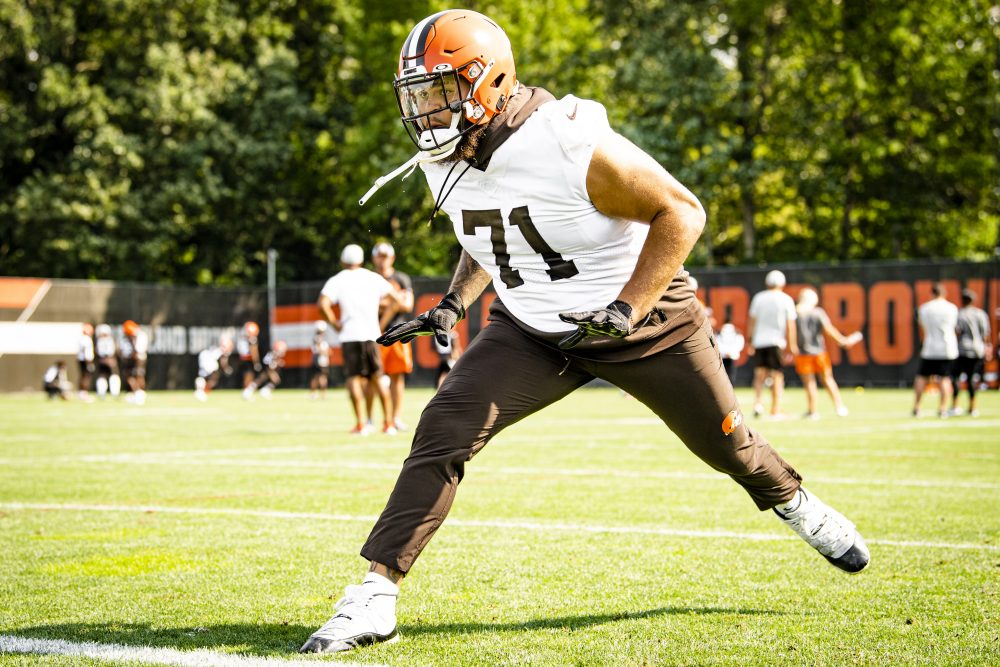 He made the switch to left tackle after a lifetime at right tackle without an in-person offseason program or a preseason. He started all but one game on arguably the NFL’s top offensive line and held his own as the Browns reached the playoffs for the first time in 18 years.

“I feel like everything that I was expecting to do, I lived up to. Now with having this opportunity, having it there at my hands, I expect to be a lot better,” Wills said recently.

The confidence comes from comfort. Completely reprogramming the brain and muscles requires time on task.


Wills described the move as jarring.

“I think the best way to put it is you wake up one day and you’re just automatically left-handed and you’ve been right-handed your whole life,” he said. “That was pretty much how I felt when I had to make that transition, just like waking up and it’s completely different footwork aspects, using my hands, even like as simple as a left tilt with my head.”

General manager Andrew Berry believed Wills could handle the switch and didn’t hesitate to draft him out of Alabama with the No. 10 pick in 2020. Berry trusted veteran line coach Bill Callahan to facilitate the transition, but the pandemic kept Wills from working in person with Callahan until last August.

“He didn’t benefit from any type of offseason on the field,” Callahan said.

A year later, he sees improvement in Wills’ footwork, technique and hand usage and placement.

“I don’t think it’s close relative to where he was a year ago,” Callahan said. “He’s taken advantage of the learning processes that he went through a year ago. And he’s trying to accelerate his growth in a lot of different areas.”

Wills is even more blunt.

“I feel like I’ve improved in all areas,” he said. “I thought I was trash compared to this year watching film. It’s a brand-new game when you turn on the film this year.”

The comfort comes in all areas: details of technique, understanding of the system, symbiosis with left guard Joel Bitonio.

“The game is a whole lot slower than it was last year,” Wills said. “The playbook is thoroughly completed in my mind. I just feel like everything I am doing right now is a lot more advanced than I was a year ago.”

Bitonio remembers “some rough, rough film” from camp a year ago as Wills struggled to stay in front of defensive ends Myles Garrett and Olivier Vernon.

“He’s had time and he’s developed,” Bitonio said. “He’s a left tackle now and now he’s just refining some of those things. And he understands he did some really good things but to take the next step there’s a couple little things that he’s really been working on in training camp and you can see that he’s focusing on those and really making those strides.”

Pro Football Focus grades every snap of every player and had Wills at a strong 79.4 in pass blocking (four sacks) but a below-average 50.3 in the run game last year. Coordinator Alex Van Pelt agreed in general terms.

“Some of the point-of-attack run has been an emphasis working with him,” Van Pelt said.

“Personally and professionally, I just think he has been very much about his business,” coach Kevin Stefanski said. “I have noticed. I know his teammates have noticed, as well.”

Wills joined the rest of the starters on the sideline for the first two preseason games then played two series in the finale Sunday in Atlanta, getting called for a false start. He got quality work facing the Giants in a pair of practices and went back to trying to stop Garrett and Jadeveon Clowney last week after they missed time with injuries.

Wills appreciates the work against Garrett, an All-Pro defensive end who has 35½ sacks in his last 40 games.

“You’ve never seen anyone like him throughout the league,” Wills said. “You just see so many different combinations of moves. Like some guys you stop them on their very first move and Myles is giving you three and four. It’s a whole new game when you’re going against Myles.”

Garrett has had plenty of success in their matchups.

“We treat it as a learning situation,” Callahan said. “And there’s so much that Myles does well. When people game-plan Myles, there’s usually a double team or a chip, we’re not into that mode. We’re really trying to isolate him as much as we can, so he sees all the different moves, all the different strikes that Myles can give him.

“He’ll get frustrated here and there if he loses a matchup, but I think it’s such a great learning situation for him. Having a veteran player like Myles who we all respect can teach him a lot, can communicate what he did and exchange that information with Jed. It helps build Jed’s toolbox.”

The one-two punch of Garrett and Clowney gives tackles all they can handle.

“They both have speed, they both have great change of direction, they have very good hands and they can go from speed to power in a heartbeat,” Callahan said. “These guys are like Nolan Ryan every day. Tthey come at you with a fastball and then here comes a changeup or here comes a slider, and you have to be able to hit it.”

Wills added muscle in the offseason while dropping 13 pounds to 315 and 18% body fat. He got pointers from 10-time Pro Bowl left tackle Joe Thomas when they met for the first time during camp and said he learned from Bitonio last year how to play with poise.

On a line full of proven veterans, Wills feels pressure to rise to their level.

“Of course, that’s the name of the game,” he said. “It’s just us five the whole game unless somebody gets hurt, so we all have the same amount of responsibilities on our shoulders.”

Bitonio believes Wills is up to the task.