Jim Ingraham: Placekicking a great job — if you can keep it 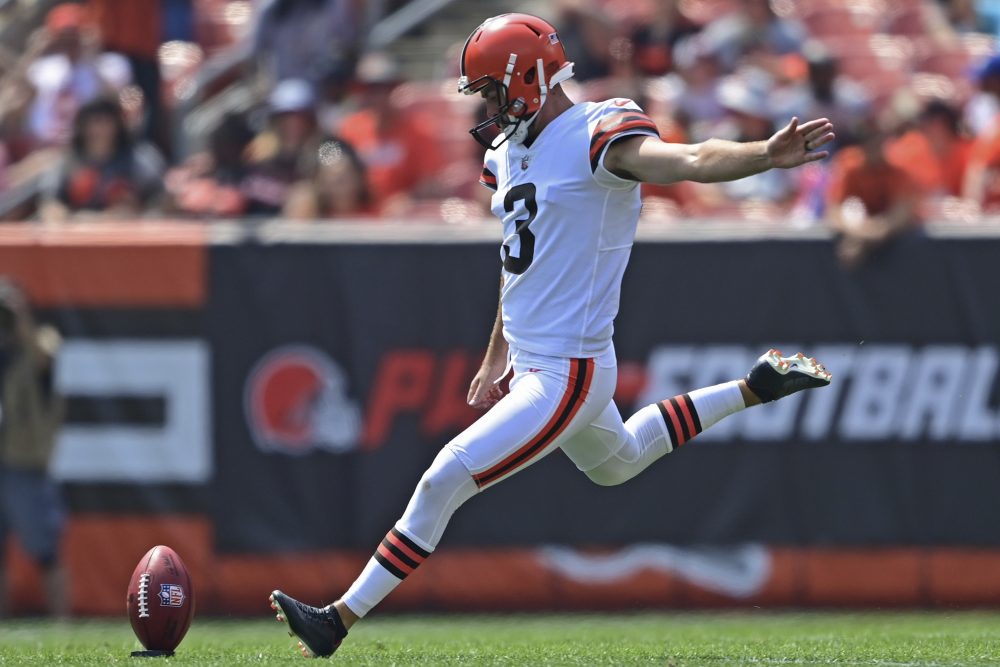 Name a job in America in which, on one of your workdays, you do whatever it is you do for a total of 15 seconds.

Then you wash up, punch out, and head for home.

Believe it or not, there are at least 32 jobs in America that fit that description. And the money is very good: NFL placekicker.

It’s the most bizarre employment existence in the history of mankind.

The employee only works one day a week, and on that one day, the employee does nothing for 99 percent of the game.

And he makes more money than 99 percent of us.

Talk about nice work, if you can get it!

“Honey, how was work?” his wife asks when he gets home.

There’s a slight pause as they look at each other — and then both burst into hysterical laugher.

I know, placekickers also kick off and kick extra points. So — whoopty hell — go ahead and factor that in as well. Where we at now? A 30-second workday?

Last year, Baltimore’s Justin Tucker, who’s a Hall-of-Famer-in waiting, had 29 field goal attempts for the season. His salary was $3.5 million. That’s a lot of money for not a lot of work, but there’s also this: Tucker made 26 of those field goal attempts, one of which was a last-second, game-winning kick to beat the Browns.

That’s the thing about placekickers, the money is great, the hours are not just convenient but darn near non-existent, and they don’t even have to wash your uniform.

In the first 21 years of their existence (1946-67), the Browns’ placekicker played left tackle.

His name was Lou Groza. He’d help lead bruising Marion Motley on power sweeps, then, on fourth-and-8, he’d wipe the mud off his jersey, hitch up his pants and, using the old-school, square-toe shoe, straight-on style, drill a 40-yarder through the snow and the uprights for another Browns victory.

They don’t make ’em like that anymore, or like Don Cockroft, who took over for Groza in 1968 and booted them through for the next 12 years, through 1980.

Then came the placekicking revolution led by the soccer-style sidewinders, who as a species weren’t the most physically intimidating specimens, but made up for it by occasionally countering the tense moments’ gravity with levity.

“I keek a touchdown!” Garo Yepremian once reputedly squealed to Lions teammate Alex Karras after booting a game-winning extra point.

The Browns’ first soccer-style kicker was a keeper, Matt Bahr, who held the job for nine years, from 1981-89, meaning in their first 43 years of existence the Browns had just three placekickers: Groza, Cockroft, and Bahr.

Bahr got hurt late in the 1986 season and the Browns signed 38-year-old dinosaur Mark Moseley, one of the last non-soccer-style kickers, who’s 27-yard field goal in overtime gave the Browns a 23-20 playoff win over the Jets.

Bahr returned for a couple of more years, and then it started to get ugly. Jeff Jaegers, Brian Franco and Jerry Kauric kicked it around in the late ’80s, until Matt Stover showed up and had a solid five-year run that dovetailed into the Phil Dawson Era, which lasted 14 years, through 2012.

It was followed by the cattle call mentioned above, starting with Cundiff.

It’s McLaughlin’s job to lose now, and history tells us that he will, perhaps sooner rather than later. His alarming it-went-thataway extra point attempt that disappeared sideways off TV screens throughout Northeast Ohio late in the final preseason game in Atlanta was hardly a confidence-booster for him or Dawg Pound Nation.

Given the big game the Browns are hunting this year, there figures to be plenty of big kicks in high-stakes situations that will need to be made. The kind of kicks that either turn kickers into heroes or unemployed kickers.

Those 15-second workdays sound like a nice gig, until you actually have to trot out there in front of 65,000 apprehensive, championship-starved fans — and not break their hearts.

Analysis: 5 takeaways from a strong finish to the preseason
Browns Preview 2021: How we got here