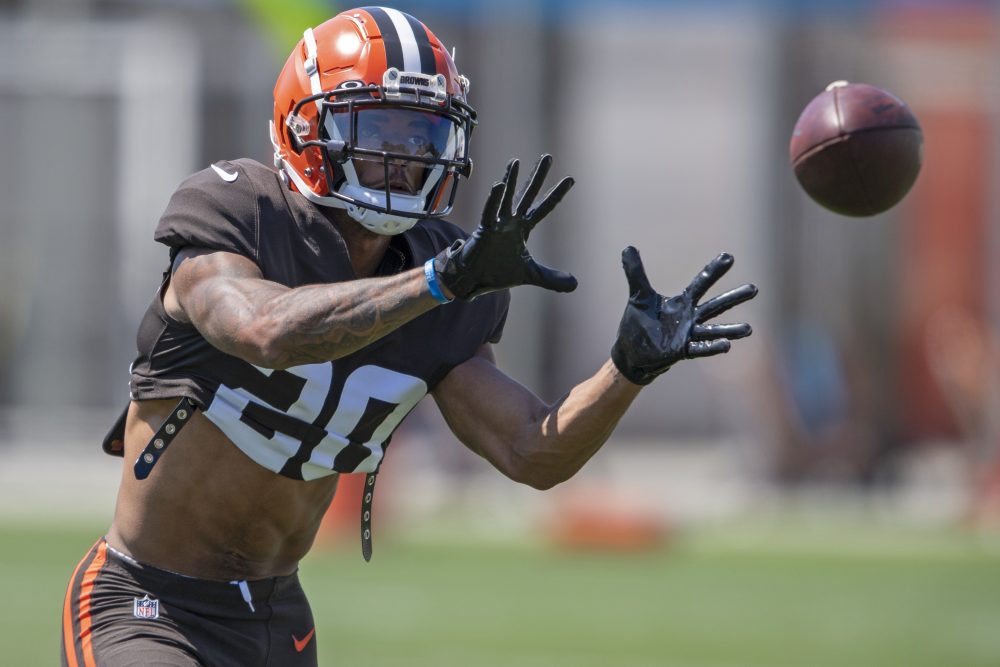 Greg Newsome II wouldn’t be in line to start Week 1 as a rookie without living a lesson his mom, Crystal, taught him as a child.

The No. 26 pick out of Northwestern has earned admiration from teammates and the trust of coaches by taking coaching and quickly applying it with acute attention to detail. The self-discipline was demanded at home in Chicago.

“It probably came from my mom always telling me to make sure I’m doing things the right way, treating people with respect and when someone asks me to do something, make sure I do it on time, on point,” Newsome told The Chronicle-Telegram on Wednesday. “So I guess that starts with my mom, and it’s not really even starting with football, just starting with life in general.

“When my mom or grandma tells me to go pick something up, do it right away, do it the right way, so ultimately you can go do something else. If I didn’t clean my room the right way, I couldn’t go outside.”


Life as an NFL cornerback is a bit more complicated. As soon as Newsome stepped foot in Berea, the coaches began changing his technique.

At Northwestern, where he was first-team All-Big Ten and second-team All-American as a junior in 2020 and second in the conference with 11 pass breakups in 2019, he would told to give ground before the snap. With the Browns, the plan is to impose his will on the receiver.

“I’m kinda stagnant, I’m staying there and I’ve just got to be patient by just standing at the line and trying to get hands on. Obviously I’m still working on it a lot, but it took me from rookie minicamp all the way throughout training camp and still now to finally get comfortable with playing.”

He went from retreating and being 3 yards off the line at the snap to being 1 yard away and standing still. Whether he bumps the receiver depends on the release.

“Sometimes a receiver will take a very wide release and you can’t get hands on, so just gotta open up and run,” he said. “But sometimes when he gets a more tight release, then you’re able to get hands on.”

Safety John Johnson III has watched Newsome transfer the coaching from the classroom to the field.

“You tell him to line up like this, step here, punch here, he’s going to do exactly what you tell him to do every single time,” he said. “So that’s a real credit to a rookie coming in for his first couple days in the league.”

Newsome gained a large dose of confidence by facing Jaguars veteran Marvin Jones in the preseason opener. The real opener will feature perhaps the league’s toughest matchup, Chiefs receiver Tyreek Hill, who can make a cornerback look like he’s running in quicksand with his 4.29-second speed in the 40-yard dash.

Newsome (6-foot, 192 pounds) was already on his way to winning the starting job when Greedy Williams strained a groin Aug. 22 against the Giants. Newsome and No. 1 corner Denzel Ward will man the outside and stare down Hill.

“Obviously I’ve been studying Tyreek Hill since college, watching some of his stuff,” said Newsome, who silenced critics by running a 4.38 40 at his pro day. “Like Coach said, we’re trying to be the best in the world, too. I know they’ve got some very, very great players, but I think if we stick to our technique and trust our eyes and have our eyes in the right spot, then we’ll be able to affect some of those routes.”

Newsome said the only person he’s covered as fast as Hill is third-round rookie Anthony Schwartz, who ran a 4.26 40.

Newsome didn’t turn 21 until after he was drafted and played only 21 games in his three years with the Wildcats. He isn’t worried about being ready to face the Chiefs or anyone else this year.

“Playing as a freshman helped a lot,” he said. “I think that’s where you build your confidence. I think I definitely played enough games to be ready.”

“He is a very consistent learner,” Howard said. “He is wise beyond his years. He asks great questions. Really thoughtful on his craft, on what he should be looking at, his alignments and all of that stuff. That really stands out with Greg.”

Newsome studied Ward while he was in college, marveling at his speed and efficiency. Newsome got a tip from Ward once he arrived in Berea that he said he’ll use the rest of his career.

Ward has been impressed with Newsome’s consistency and versatility, as he’s shown he can play in the slot as well as outside.

Well-rounded fits his personality. Just glance at his orange Crocs, which are filled with a variety of Jibbitz: No. 20, Black Lives Matters, Louis Vitton, a video game controller, Supreme and one that says “Young, Gifted and Black.”

“It just says honestly that I care about a lot of other stuff,” Newsome said. “Obviously football is the top priority, but at the end of the day I want to be somebody that changes the world, changes for the better.

“And there’s a lot of stuff in the world that’s not OK right now. Football is my main job, so I’ve got to be able to do that 100 percent, but when I get that down, I want to be able to affect communities and create change definitely in the world.”

Cleveland is his new community, and the fans made an immediate impact.

“It’s just showing love right away and just accepting me,” he said. “As soon as I got to the state of Ohio and I got to the city of Cleveland, just walking around, the fans showing me love all the time on Twitter, commenting on pictures, just everything. I feel like they’re some of the best fans in the world for sure.

After a jarring move to left tackle, Jedrick Wills Jr. is more than holding his own
Pain but gain: Chris Hubbard back in good place following long, grueling rehab