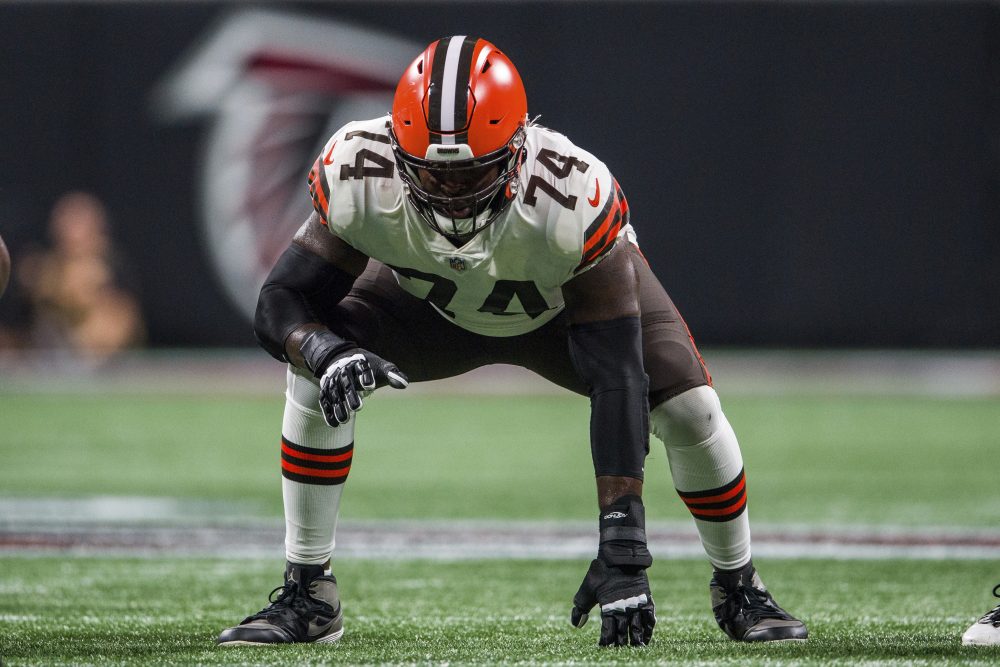 The breakthroughs were slow to come and separated by months. The lows were dark and more frequent.

As offensive lineman Chris Hubbard worked his way back from a torn quadriceps and dislocated kneecap — the first surgery of his career — he missed his 4-year-old son, meditated to gain peace and watched for motivation the Dec. 20 play against the Giants in which his right leg gave out.

Hubbard, 30, is back for his fourth season with the Browns. He played in all three preseason games and is ready for his second season in the important role as the sixth man for arguably the best line in the NFL.

While Hubbard said he was always confident he’d return, he didn’t experience the most gratifying step until five or six months into the process as the quad needed time to strengthen. It’s a step mastered by the average 5-year-old.

“When I first started pedaling on a stationary bike, turning it over with my knee, that’s when I knew. I was like, OK, man, I’m getting somewhere, I’m starting to see improvement,” he told The Chronicle-Telegram recently.

The next big hurdle was running, which didn’t happen until about a month before training camp in late July. He hadn’t practiced at all during the offseason program.

That wasn’t a given, especially in the third month of the rehab.

“That’s when you start to get into firing your muscles up again,” Hubbard said. “You didn’t see so many increments of getting better. You had the highs and lows. I think that was a struggle. I was away from my son here and there, too. And just trying to get back right, that’s all I wanted to do. Month 3 and Month 4 was probably the toughest of the tough.

“But it was well worth it. I learned a lot about myself. It humbled me in so many ways. I never take anything for granted.”

Hubbard and his wife, Tamara, struggled to conceive and were delighted when Creed, 4, was born. Tamara and Creed were in Atlanta as Hubbard bounced back and forth to the Browns facility during the rehab. The time away took a toll.

Hubbard has been open about his struggles and is an advocate for mental health. The injury and the aftermath were sources of anxiety.

“I’m going to be honest, I had some moments where it was like, man, how am I going to make it through the day?” he said. “I have dark moments. But I just knew if I prayed and meditated, doing some of the things that kind of helped me out with growth, I knew I’ll be fine. And then I had a great support system with my mom, talking to my dad, my grandmother, people that’s in my circle that keep me on the straight and narrow.

“And my son, he’s always making me laugh and smile, joking or something that we’re doing around the house. He helped me out tremendously. And I know for a fact that I’m gonna keep going for him. And that was one of the tests and trials throughout the whole time about being mentally sharp, and I feel like I did OK.”

Hubbard didn’t try to shield Creed from the physical and emotional pain of the last nine months.

“He’s seen me crying in moments where I had to push my legs at certain points. He’s seen it all,” Hubbard said. “So he knows what Dad’s been through. And I’ve never tried to shy away from letting him know what’s going on. So he knows and he still loves football to this day.”

The tears came from the totality of the experience.

“And I’m very humble. I’m very appreciative of the people that are in my life. So I think that’s one of the things that I think about when I play this game. I don’t play just for me, I play for the people that support me.”

Hubbard’s beloved in the locker room.

“Great teammate,” coach Kevin Stefanski said. “I think you can judge a lot about a player out here on the field in how they treat their teammates. He is always supportive and constantly around the guys offering any help. I think he is just outstanding in that regard.”

Hubbard was blocking Giants defensive end Dexter Lawrence II when the quad tore. He believes the tear caused the kneecap to dislocate. He initially thought he could keep playing but couldn’t put weight on the leg.

“I watch it all the time,” Hubbard said. “It’s motivation for me. I look at it just like from eight months ago to where I’m at now, it’s a dream come true. It’s a blessing to be where I’m at right now.”

The first snaps against the Jaguars in the preseason opener “felt amazing.” He worked mostly at right tackle throughout camp but switched to left tackle in the finale vs. the Falcons.

He started at right tackle and guard a year ago after spending his career at right tackle. The versatility was vital, and Hubbard developed a great appreciation for the role of sixth lineman, which fits his team-first attitude.

“It’s fun when you’re able to do those type of things. That’s just my love for the game, I’ll do anything they ask me to do. If I could punt the ball, I’d punt the ball, if I could kick, I’d kick.

“I’d do anything for my teammates, to be able to win, be able to put my hand in that pile and just continue to go and not leave off anything.”