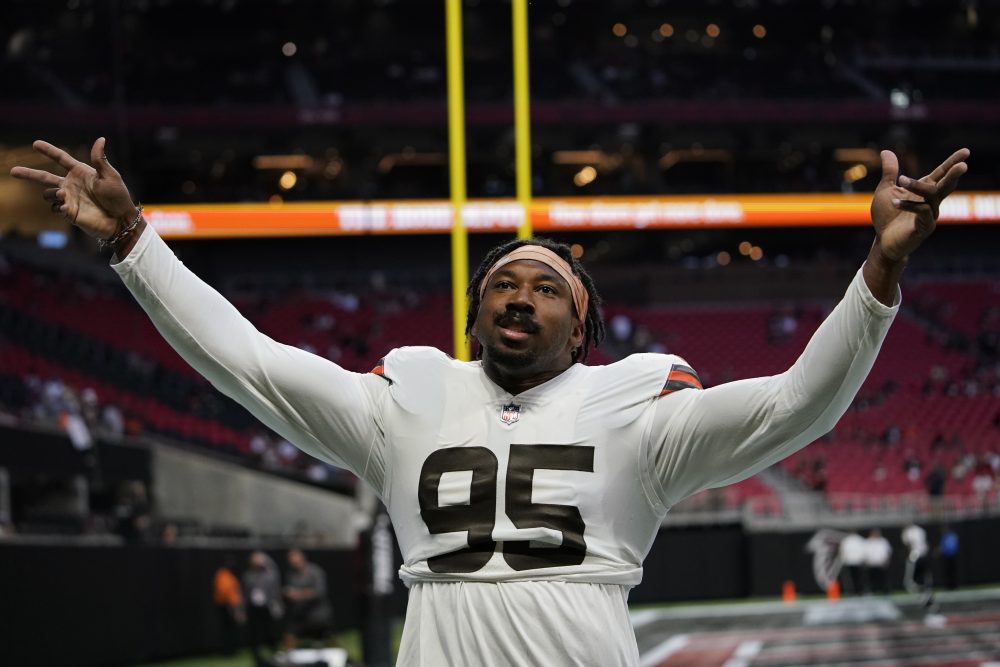 BEREA — Myles Garrett tweeted his congratulations to and appreciation for All-Star forward Giannis Antetokounmpo when the Milwaukee Bucks won their first NBA title in 50 years in July.

The admiration for Antetokounmpo is about much more than Garrett’s unquestionable love of basketball. What Antetokounmpo did with the Bucks resonates with Garrett in his quest to bring the Browns their first Super Bowl title.

Antetokounmpo signed a contract extension rather than become a free agent, countering the recent trend of NBA superstars relocating in search of more stars on the roster and better odds of winning a championship.

“I love it. I love seeing that,” Garrett, the All-Pro defensive end, told The Chronicle-Telegram last week in a one-on-one interview at Browns headquarters. “I remember when the greats of my dad’s era used to do that, they stayed where they were drafted and were loyal to their team that was loyal to them. I have a lot of respect for that.


“It’s not like I don’t have respect for those who decide to just transition to other teams, it’s just the fact that the team’s good to you and you return that to them.”

The Browns stood by him when he was suspended for the final six games of the 2019 season for hitting Steelers quarterback Mason Rudolph in the head with a helmet during the final minutes of a prime-time game. Then they signed him to a five-year, $125 million extension before he played another down.

Giannis deserves all the love. Bro really just had 50/13/5 in the close out game of the finals… iconic.

Garrett can relate to Antetokounmpo.

The most common description of Garrett as a defensive end includes a variation of “freak.” He’s 6-foot-4, 272 pounds and can bend like a ballerina as he turns the corner to destroy the quarterback.

“Coming in seeing that guy is just ridiculous,” rookie cornerback Greg Newsome II told The Chronicle. “He can do it all. He’s definitely an amazing athlete.”

Antetokounmpo’s nickname is the “Greek Freak.” He’s 6-11, 242 and can do everything on the basketball court, as evidenced by his 50-point, 14-rebound, five-block performance in the clinching Game 6 of the NBA Finals.

Antetokounmpo is from Greece but calls Milwaukee “home.” Garrett is from Arlington, Texas, but has made a life in Northeast Ohio since being the No. 1 pick of the 2018 draft.

He may not be chasing the publicity but he’s no shrinking violet. He started his own channel on YouTube and tweeted his frustration about being ranked No. 16 on NFL Network’s list of the top 100 players.

“It means my peers and their coaches and everyone in their building and their facility thinks that there’s 15 guys ahead of me in the league,” he said. “I don’t agree, so I’ve got to go out there and prove it, I’ve got to prove I’m the best.”

“I couldn’t do it all year,” Garrett said. “For one reason or another, not going to make excuses, but this year I’ve got to be available, have to be on the field and have to prove I’m the best, day in and day out.”

Remember this… 15 people better than me… noted 📝 pic.twitter.com/wdDRxfFnFi

The suspension stopped his 2019 season in its tracks after 10 sacks and two forced fumbles in 10 games. He finished last season with 12 sacks and four forced fumbles in 14 games but wasn’t the same after missing two games in November with COVID-19, getting just 2.5 sacks and no turnovers in the five regular-season games that followed as he struggled to catch his breath.

“I do think he had a dominant season,” defensive line coach Chris Kiffin said. “Obviously there was a little bit of an effect coming back with his health, wind and stuff like that.

“I think he has put it out there the type of player he can be — a Defensive Player of the Year type of player. He is hungry to get better, and I am trying to help him get better.”

Garrett has 42.5 sacks and 10 forced fumbles in 51 career games, is a two-time Pro Bowler and was first-team All-Pro last year. He doesn’t have the resume or recognition of Patrick Mahomes, Aaron Rodgers or Aaron Donald, but Garrett believes he’s the most talented player in the league.

He entered the NFL talking about being the Defensive Player of the Year and becoming a Hall of Famer. The motivation to reach those goals and No. 1 in the top 100 is always front of mind.

“I never stop thinking about it,” Garrett said. “Nonstop. I want to be the best. Even when I’m sitting in the offseason and I’m not doing anything, it’s how can I get ahead?

“I watch film, try to eat right, try to make sure that I’m taking care of what I need to so I don’t fall far behind. I don’t want to fall so far behind that I feel like I’m trying to catch up all offseason to where I was before. Stay at a weight and a physical fitness that I feel like is good to maintain and then build from there.”

The results are obvious.

“You wouldn’t think he’d come back bigger, stronger and faster, I mean, he surprises us every time,” Kiffin said. “He’s one of the best athletes in the world and he’s constantly getting better as a football player every year, every day.”

The never-satisfied mindset carries over to practice.

“I just need to do each rep to the best of my ability,” Garrett said. “Can’t take a rep off, can’t end it early, can’t have dumb penalties. I just gotta do what I do.”

Even without the “snub” by the voters in the top 100 rankings, Garrett would push for excellence. The motivation starts internally.

“Absolutely. I feel like the great players do that, they always have something motivating and driving them, whether it’s to stay on top or get there,” he said. “And then week by week finding something that just adds fuel to the fire, whether it’s something that someone said or something you feel you need to do to get the job done, to get to that mindset to where you’ve got to go out there and dominate.”

The Browns’ goal is more tangible, and lasting, than a spot on a list. They’re trying to get to and win the first Super Bowl in franchise history.

“I feel like if I’m the best player on the field I give us a good chance to win the Super Bowl,” Garrett said. “But I can only make the plays that I can make. I can’t do anything out of the scheme, because it’s all about the team and it’s all about winning.

“(Where I rank) that can be voted and disputed and debated, but winning a Super Bowl, that only happens for one team and you can’t really debate that.”

As Garrett prepares to start his fifth season Sunday in Kansas City, he’s contributed to the organization’s improving culture by taking on a larger leadership role.

“I think that’s helped the team, try to give them a leader that’s on the field making plays, doing things,” he said. “Sometimes it’s a little bit harder to be led by someone who’s not on the field, or who’s not making all the plays or getting all the attention. Whether I’m off the field, in the classroom, just walking around on the street in Cleveland or I’m out here on the field, people’s eyes are on me. So I have to make use of that, because people are going to want to listen to what I have to say, my opinion, and have to do something with that ability and that platform I’ve been given.”