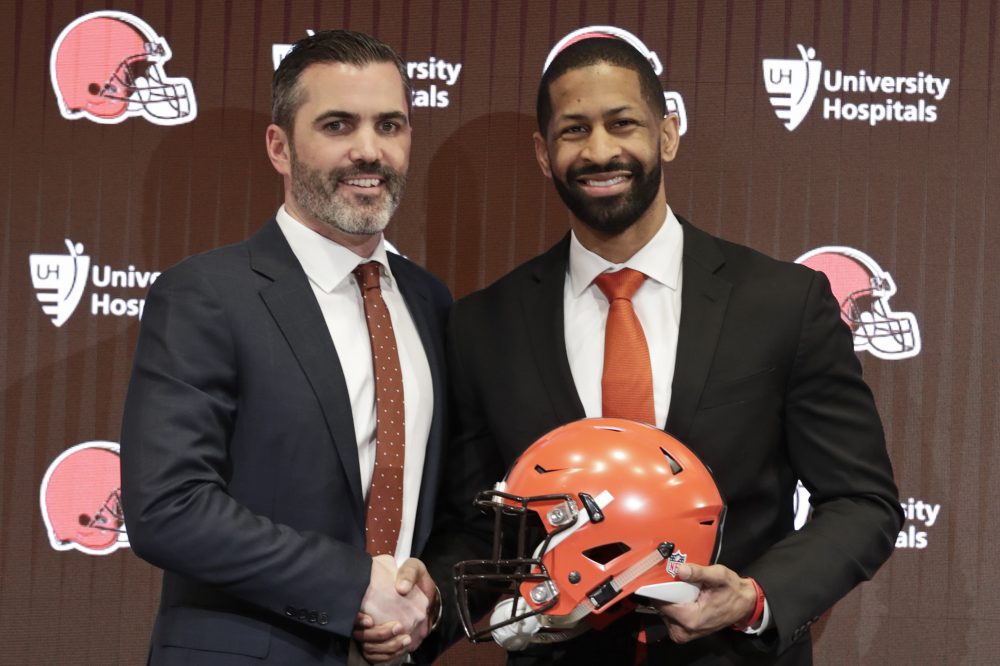 The journey from dysfunction and irrelevance to stability and Super Bowl contention was filled with stumbles and bumbles and seemingly took forever.

Here are 10 mile markers on the Browns’ path toward their ultimate goal.

Hail to the chief

The move was ridiculed at the time and later dismissed as part of the organization’s missteps. But chief strategy officer Paul DePodesta, who was hired in January 2016 away from a career in Major League Baseball, has been influential in the rebound.

He strengthened the analytics department, earned the trust of owners Jimmy and Dee Haslam and led the hiring process that landed coach Kevin Stefanski and general manager Andrew Berry.

DePodesta’s main role is making sure the organization is functioning efficiently. He isn’t beholden to conventional thinking and is always looking for creative ways to improve.

The Halsams extended his contract last season, so he, Berry and Stefanski are signed through 2024.

The drafting of defensive end Myles Garrett with the No. 1 pick in 2017 was a monumental moment. Left guard Joel Bitonio, receiver Rashard Higgins and long snapper Charley Hughlett were already on the roster and remain, but Garrett gave the Browns an elite athlete driven to be the best in the business.

Garrett has been an All-Pro once and a Pro Bowler twice in four seasons and plans to put it all together in 2021 and become Defensive Player of the Year. He has 35.5 sacks in his last 40 regular-season games.

Ray Farmer was the general manager who drafted Bitonio, and Sashi Brown picked Garrett, but John Dorsey’s brief tenure as GM really started the roster transformation.
Dorsey was hired in December 2017, hours after Brown was fired after less than two years in charge. Dorsey was out two years later because he hired Freddie Kitchens as coach and his personnel department fought with the analytics side of the building.

But many of the key contributors in 2021 were acquired by Dorsey, including trading for receiver Odell Beckham Jr. and right guard Wyatt Teller and signing running back Kareem Hunt.

Dorsey’s first big move was trading for receiver Jarvis Landry and signing him to a contract extension. While Beckham gets the bulk of the attention, Landry is the man teammates look to for inspiration.

Landry’s “contagious” speech is unforgettable, but he also leads every day with his work ethic, practice habits and toughness in games. He’s also been highly productive, with 236 catches for 2,990 yards and 13 touchdowns in three seasons.

The man for the job

Baker Mayfield said at the scouting combine he was the right quarterback to turn around the Browns, who had gone 1-15 and 0-16 in back-to-back seasons. Dorsey agreed and drafted him with the No. 1 pick.

All that losing gave the Browns consecutive overall No. 1 picks for the first time since 1999 and 2000, when they took quarterback Tim Couch and defensive end Courtney Brown in the first two years of the expansion era. Garrett and Mayfield have already proved to be a better tandem.

After struggles in 2019 and at the start of last year, Mayfield played at an elite level in taking the Browns to the playoffs for the first time since 2002. The next step is a contract extension for the guy who seems like the long-awaited answer at the game’s most important position.

Three picks after Mayfield, he took Ohio State cornerback Denzel Ward, who went to the Pro Bowl as a rookie and is among the league leaders with 40 passes defensed in three years. He’s also expected to sign a huge extension.

Dorsey missed on offensive lineman Austin Corbett at No. 33 but nailed it with running back Nick Chubb two picks later. Chubb’s a two-time Pro Bowler with consecutive 1,000-yard seasons and a career average of 5.2 yards per carry.

The Browns had been searching for the right coach as long as they’d been looking for a quarterback. Stefanski made a convincing case in Year 1 that he’s the guy, winning 11 games in the regular season and being named AP Coach of the Year.

His intelligence is the biggest separator, followed closely by his even-keel demeanor.

Those strengths fit for Berry, and the similarities contribute greatly to the organizational alignment that was missing for two decades.

Just as Stefanski’s game plans, play calling and leadership are keys to success, Berry’s talent acquisition plays a huge role. Berry has taken what Brown and Dorsey left and quickly built upon it in his first two offseasons.

His moves last year made life easier for Mayfield, and this offseason was devoted to the defense.

The 11-5 regular-season record and playoff trip were special, but the stunning win over the Steelers — the first in Heinz Field since 2003 — sent fans over the moon and provided another reason to think 2021 will be even more special.

The Browns wouldn’t be legitimate Super Bowl contenders without an upgraded defense, and that’s exactly what Berry set out to construct in the offseason.