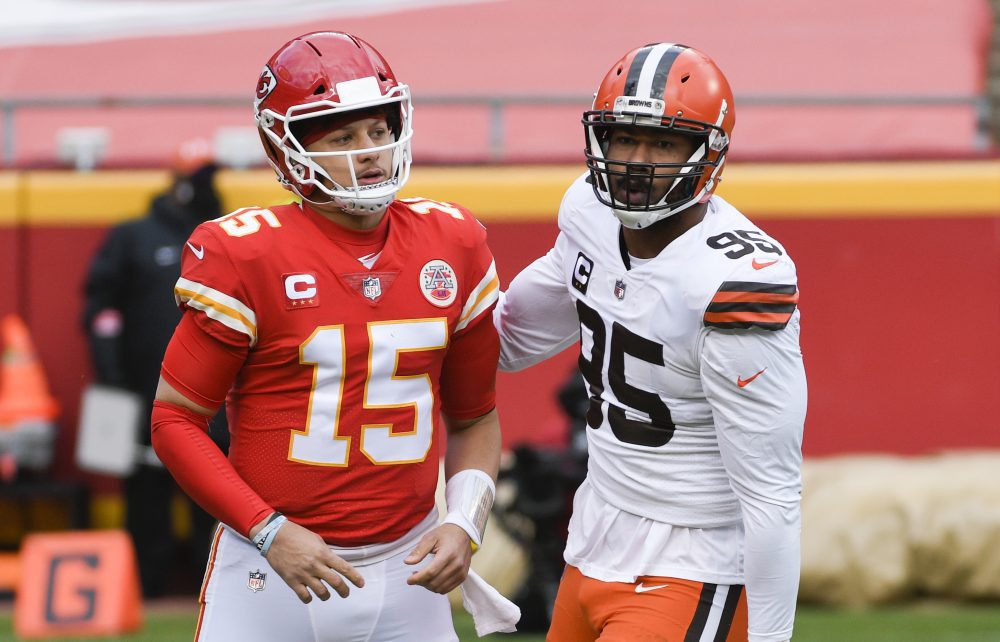 BEREA — The reconstructed Browns defense won’t have any time to settle in.

Its speed, communication and cohesion will face arguably the toughest test of the season Sunday in the opener in Kansas City.

Tyreek Hill is a three-time All-Pro and five-time Pro Bowl receiver. Travis Kelce is a three-time All-Pro and six-time Pro Bowler who caught 105 passes for 1,416 yards and 11 touchdowns last year. They get the ball from quarterback Patrick Mahomes, the 2018 MVP who has 1,114 completions, 14,152 yards, 114 touchdowns, 24 interceptions and a 108.7 passer rating — all the best through 46 starts among the greatest quarterbacks of all time.

He gets the plays from coach Andy Reid and coordinator Eric Bieniemy.

“They really scheme you up, they stress your coverage and they make you cover the field vertically and horizontally, and then when you do it right, you have to make the tackle,” coordinator Joe Woods said. “Tough to defend — good scheme and good players — but we feel good where we are. We just have to execute.”

Johnson is one of as many as eight players who will start Sunday who weren’t on the field — or the team — when the Browns lost 22-17 to the Chiefs at Arrowhead Stadium on Jan. 17 in the divisional round of the playoffs. Defensive end Myles Garrett, cornerback Denzel Ward and safety Ronnie Harrison Jr. started then and have been joined by Johnson, end Jadeveon Clowney, tackles Malik Jackson and Andrew Billings (he opted out last year), linebackers Anthony Walker Jr. and Jeremiah Owusu-Koramoah and cornerbacks Greg Newsome II and Troy Hill.

Many of the starters were together during training camp, but the entire starting unit didn’t take the field together in the preseason.

“You always have questions,” Woods said. “I feel good in terms of where we are, but it is going to be that first game and that pressure. It is a big game, a hostile environment, but I think we are ready to go and we will see what happens.”

General manager Andrew Berry devoted nearly all his energy and resources in the offseason to fixing the defense. He added speed, strength and length, as well as depth at all three levels.

The overhaul was necessary after the defense ranked 21st in scoring (26.2 points per game), 17th in yardage (358.4) and 23rd on third down (43.9 percent conversions). The Browns didn’t force a punt in the playoff loss despite Mahomes getting knocked out of the game in the third quarter and gave up 24 first downs and 438 yards.

“Our defense is so much better than it was a year ago, we expect to hopefully get a few punt return opportunities so we can help our offense in that regard,” special teams coordinator Mike Priefer said.

The emphasis on improving the speed included ends Clowney and Takkarist McKinley, Walker, Owusu-Koramoah and Newsome. The Chiefs will challenge it all over the field.

“I definitely feel the speed, the guys we drafted and the guys we signed in free agency,” Woods said. “The NFL, the game is changing. It is like playing basketball on grass against some teams. They want to spread the field, get you one-on-one and see if you can make a tackle.

“Getting more speed and guys who have more cover skills really at all three levels of the defense is critical in today’s football.”

The makeover was a mixture of veterans with playoff experience and rookies with loads of potential.

“If you look at John Johnson, Troy Hill, I was with Malik Jackson, and Anthony Walker, all of those guys have played in big games,” Woods said. “You feel that comfort because you know they have that leadership, and they have been there and done that.”

#Browns DC Joe Woods on the veteran offseason additions to the defense. pic.twitter.com/wCZ6PxkVdj

The experience is critical against the Chiefs, who’ve won 14 straight in September. They can hurt a defense in so many ways.

“All of those things you have to be really on top of it, and just go from there.”

Mahomes’ improvisation is hard enough to handle, but it’s paired with one of the strongest arms in the league. Johnson said his No. 1 job is making sure no one gets behind him, which is tougher with Hill’s jets and Mahome’s cannon.

“He could be fading backwards and you think the play is over, but he can get the ball to pretty much anywhere on the field,” Johnson said. “The arm talent is really something you have to be cautious of and stay on your guy until the whistle blows literally every single snap.”

A solution is to quickly pressure Mahomes with just the front four. The Buccaneers did that time and again in their 31-9 Super Bowl win.

The Chiefs have replaced all five starting offensive linemen and will start three rookies Sunday. They will face their own test against Garrett, Clowney, McKinley and Jackson.

“The pass rush is one of the things we’ve noticed,” receiver Jarvis Landry said. “Adding Jadeveon, obviously Myles, A-Walk, just his responsibilities, how he’s getting guys lined up, moved around, just seem a lot more smarter, disciplined and those guys are coming off the ball for sure.”

The defense isn’t running from the challenge.

“We want to be one of the best, so in order to do that we’ve got to beat the best,” Johnson said.