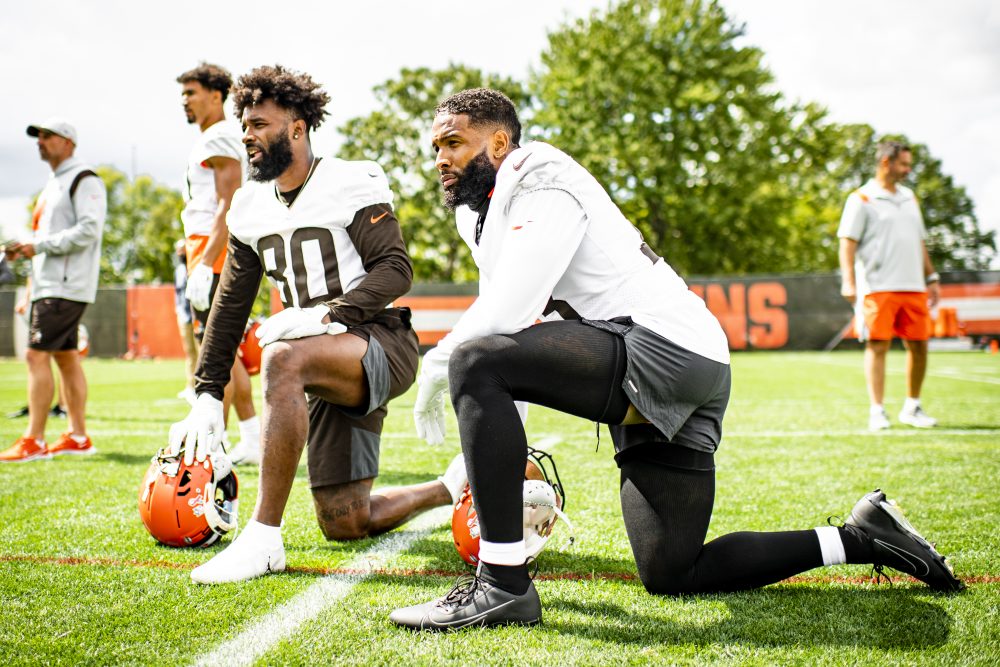 BEREA — The speed element was missing from the Browns offense in the 22-17 playoff loss to the Chiefs in January. The longest plays were 27- and 26-yard completions to tight end David Njoku.

“It definitely helps,” coordinator Alex Van Pelt said Thursday. “You can’t play short on those guys or they can run right past you, and that is always a threat. That is something that we have in our offense is the ability to go right by you. It definitely helps when you have multiple people who can do that.”

Beckham suffered a torn anterior cruciate ligament Oct. 25 and missed the rest of the season. He’s ramped up the workload in practice after sitting out team drills for almost the entire preseason.


“The last few weeks, he has definitely been more involved,” Van Pelt said. “Hopefully he feels well and everything goes smoothly and stays positive for this weekend.”

Beckham was listed as a limited participant in practice Wednesday and Thursday, and the Browns are being coy about his official availability for Sunday

“He is out here in practice and does some good things,” Van Pelt said. “It is just wait until the end of the week to see where he stands.”

Beckham has looked explosive since returning for minicamp in June and doesn’t appear to have lost a step.

“He definitely still has it. There is no question,” Van Pelt said. “He is powerful and explosive when he starts to run, and he digs in. He can fly. Having that speed back on the field, we are looking forward to that.”

Schwartz was drafted in the third round out of Auburn. He ran a 4.26-second 40-yard dash, making him immediately one of the fastest players in the league.

He missed much of camp with a hamstring injury, but Van Pelt said he’s got a strong enough grasp of the offense to play right away.

“He is a smart guy. I know he studies his butt off,” Van Pelt said. “Rarely makes mistakes. In the last few weeks, he has been out there enough. I feel comfortable putting him in and asking him to contribute in this game.”

Safety Grant Delpit missed all of his rookie season in 2020 with a ruptured Achilles tendon and could miss the start of his second year after missing much of training camp with a hamstring injury.

Delpit returned to practice Sept. 2 and was limited Wednesday and Thursday. He would be the third safety in the dime package with starters John Johnson III and Ronnie Harrison Jr.

“We will have to evaluate that really day by day,” coordinator Joe Woods said. “He has been involved. He has been in all the walkthroughs. He takes reps out there, so he definitely understands what he is doing. We want to make sure that he is healthy enough to play.”

There’s no question whether rookie linebacker Jeremiah Owusu-Koramoah will play, just how much.

“We know he is very talented, but at the same time, he is young,” Woods said. “When you see a guy like that, you want to draw a whole bunch of things up on the board, but we are going to be smart in terms of what we ask him to do.

FOR THE LONG HAUL?

“He’s not had a great camp, he’s had a good camp,” Priefer said. “He’s a solid young kicker that’s bounced around the league a little bit as kind of a fill-in for guys when they were hurt. Now he’s had his opportunity.

“He’s done enough to win the job, now he’s got to keep getting better every week, he’s got to make the kicks when we need him to make them and kick off well. I hope he goes out and kicks well and he’s our kicker for the entire year.”

Defensive end Jadeveon Clowney missed his second straight practice with a non-COVID-19 illness, but Woods said he wasn’t worried about Clowney being ready to play Sunday.

The Browns signed Clowney to a one-year, $8 million contract in April to start opposite All-Pro end Myles Garrett. They are former No. 1 overall picks.

“We want to send waves of defensive linemen at people. That’s the way we’re built anyway,” Woods said. “I feel comfortable where Takk’s at. Joe Jackson understands the system. Hopefully we get JD back here in a day or two.”

** For the Chiefs, All-Pro safety Tyrann Mathieu remained on the COVID list.

Coach Kevin Stefanski had declared rookie Demetric Felton the kickoff returner, but Priefer was less definitive. He said Felton, receiver Donovan Peoples-Jones and running back D’Ernest Johnson are the candidates to return kickoffs and punts.

Schwartz is also a possibility to return kickoffs.

“He has the ability and now that he is healthy, he is getting more reps in practice,” Priefer said. “We are using him on different phases as well because we are going to utilize his speed as much as we can.”

** Quarterback Nick Mullens, defensive end Ifeadi Odenigbo, receiver Ja’Marcus Bradley and Naggar were protected from being signed off the practice squad this week.