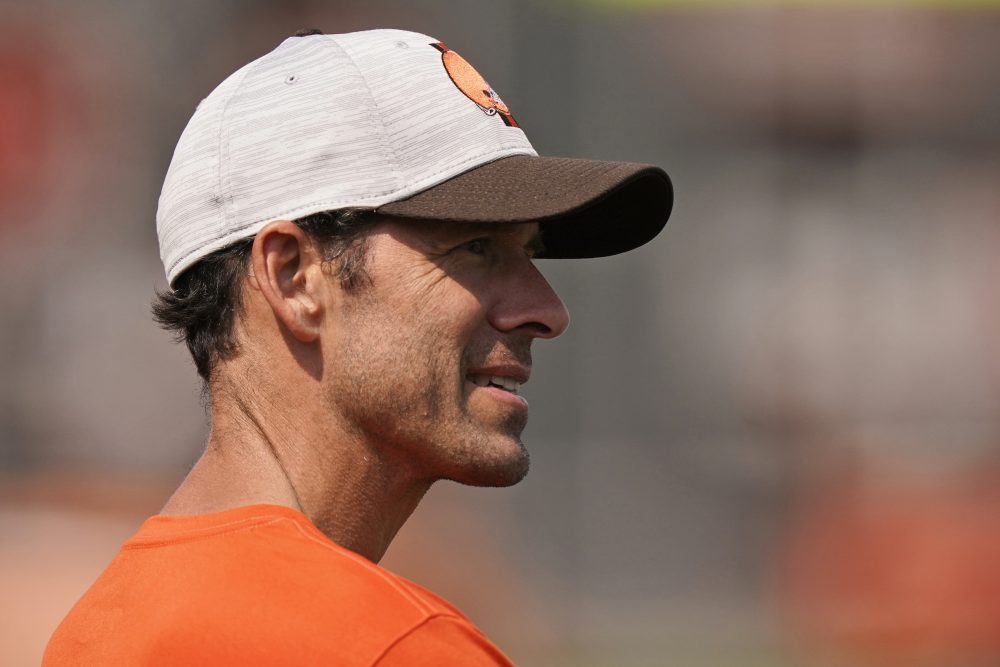 BEREA — Chief strategy officer Paul DePodesta repeatedly stressed the importance of organizational collaboration during an interview with The Chronicle-Telegram about the Browns’ turnaround from the worst team in the league to Super Bowl contender.

He gave a couple of examples to illustrate the point: the hiring of coach Kevin Stefanski and the 2021 predraft process.

DePodesta deflected the credit for hiring Stefanski, who was AP Coach of the Year in his debut in 2020, saying the choice belonged to the organization.

He also said the search revealed other excellent candidates.

“Given how in-depth the process was, it was easy to sleep at night,” DePodesta said. “I’m like, OK, we’ve really surrounded this problem. Look, there’s a lot of uncertainty in the world. It doesn’t mean that we were definitely going to get it right, but we felt like this is the best bet we can make.”

He said everyone in the football operation, from the equipment staff to public relations to scouts, was involved in gathering information on the candidates.

“All of that information gets taken in, and then ultimately we try to do what’s best for the Browns,” DePodesta said. “We were sort of already in the place of, hey, we’re all in this together, we’re sort of collectively deciding on our future.”

Stefanski then made hiring the assistant coaches a collaborative work, and DePodesta raved about the staff that’s back for a second season.

“They are really good teachers,” he said. “It’s super important, even at this level. The reality is that the best coaches are generally the best teachers. And I think we’ve got a lot of good ones.”

Building a strong culture isn’t easy, and DePodesta compared cultivating it to working on a marriage. He said it’d be a mistake to think everything’s “kumbaya, everybody’s arms around each other and, boy, isn’t this great.” Disagreements are common, and he used that reality for an exercise leading up to the draft this spring.

He asked all the coaches and personnel people which player they would be least excited about the Browns drafting. Only “something like” 16 non-quarterbacks didn’t make the list.

“If you ask 40 people who they don’t want to take, almost every player is going to get a vote, and that’s just the reality of the football operation,” DePodesta said. “So what we were able to do at that point is just to let everyone know, OK, this is the reality. So (general manager Andrew Berry) on draft day is going to have to make a choice and there’s probably going to be someone in our operation who’s disappointed that we selected that player, but just understand that AB’s in an impossible position and can’t make everybody happy. He’s ultimately going to do what he feels is best for the Browns.

“It takes some effort, but it helps bring everybody to the same page so that when we’re on draft day, nobody’s in the dumps after a particular pick. Ultimately help people feel like their voice is definitely getting heard, that just because they didn’t get their way doesn’t mean that it wasn’t heard.”

Browns Preview 2021: Fans should be prepared for something different … success

DePodesta called quarterback Baker Mayfield “a force” in the organization who’s made steady growth since he was drafted with the No. 1 pick in 2018.

“Our guys gravitate to him, they believe in him, I think he represents a lot of what we want to be,” DePodesta said. “So he’s absolutely instrumental in our progress.”

Yet he hasn’t been signed to a contract extension, and no substantial negotiations have taken place.

“Well, I think that there’s a time for everything, I’ll put it that way,” DePodesta said. “Really excited to see him here because he’s been so instrumental in our progress I would say to date and also believe going forward.”

He also made a point about the roster. The team feels good about players at high-leverage positions like defensive end Myles Garrett and cornerbacks Denzel Ward and Greg Newsome II but also about the overall depth.

“You think about depth and you think of maybe your backups. I actually think about it more collectively or more broadly,” DePodesta said. “So look at our offensive line. I think of that as depth. Now it might be the starting five, but it’s like five legit, legit guys. And certainly we feel good about the depth even behind those guys, but you look at that unit collectively and we just feel really good about it. I would say the same about our interior defensive line, about our linebackers, about our safeties. It just gives us a lot of comfort.

“We know we’re not going to be perfectly healthy for 17-plus games this year. But we feel like a lot of these guys can help us win, even if they’re only getting 15 snaps one week and then have to take 60 the next.”