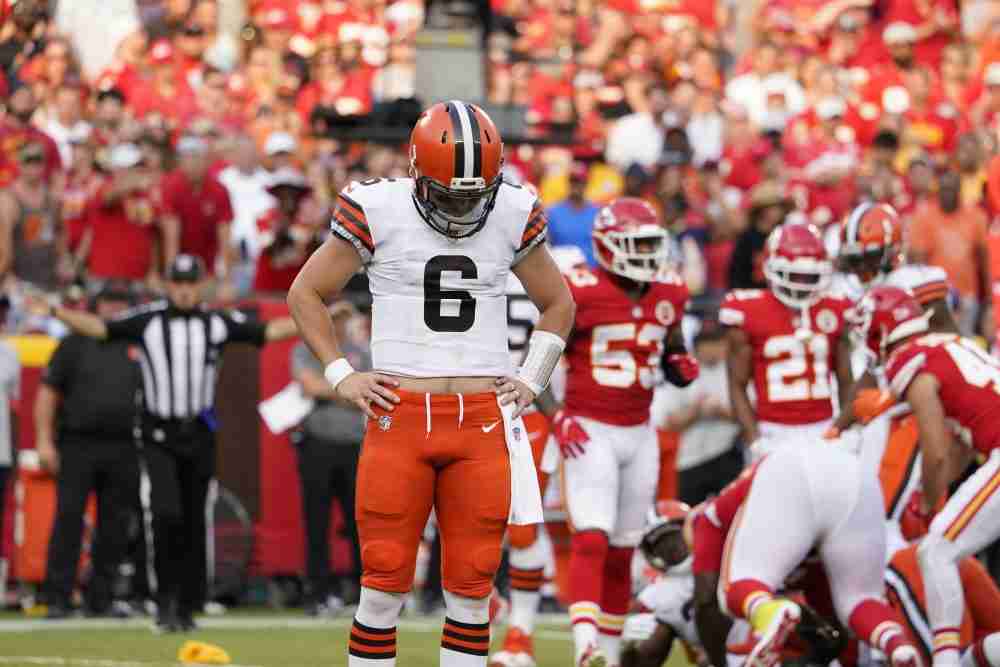 KANSAS CITY, Mo. — Defensive end Myles Garrett did his part with a third-down sack of Patrick Mahomes to force a punt.

Garrett believed Baker Mayfield would do the rest.

“I’m thinking, ‘6 and those guys over there are going to take us home,’” Garrett said.

The Browns didn’t make it to their destination. The Browns reached their 48-yard line after two first downs, but Mayfield was intercepted by cornerback Mike Hughes with 1:09 left to seal a 33-29 loss Sunday to the Chiefs at Arrowhead Stadium.

“I’m not mad at him for trying at all,” Garrett said. “I’m going to ride with him to wherever he takes us because at the end of the day he’s captain of that side of the ball and I have confidence in anything he puts up in the air or whatever his choices are because he’s shown that he can make those plays.”

Mayfield was mad at himself. He tried to throw the ball out of bounds in the vicinity of tight end Harrison Bryant, but safety Daniel Sorensen was grabbing his legs and the ball didn’t go far enough. Mayfield could have thrown it away sooner but tried to extend the play.

“He just got just enough of my feet to affect it and make me keep it inbounds,” Mayfield said. “I didn’t exactly see what happened, I was on the ground. Harrison came up and said — he apologized — I said it’s not his fault because that ball was supposed to be out of bounds about three rows up. Good play by them. Live and learn.”

“Baker gets it. He wants to win. He wants to make a play there,” coach Kevin Stefanski said. “I tip the cap to them. They made a good play.”

“He’s the leader of our team. He’s a guy that continues to work hard,” receiver Jarvis Landry said. “He played well today. Obviously we all made mistakes, but he played well and moving forward I know he’s going to continue to try to find ways to fix the things that we all should.”

Notes: Odell Beckham Jr. inactive for opener vs. Chiefs, could return next week

Mayfield was frustrated that he threw the ball so well early and was unable to make the key plays at the end. The same was true for the team, as it blew a 29-20 lead in the fourth quarter with a series of mistakes.

“You have to execute critical moments,” Mayfield said. “Nothing else matters before those moments and it always comes down to those three, four plays that you look back on and say, wow, if we had done this differently, it would’ve worked.

“So I’m going to be hard on myself, but go back and attack this week and we’ve got a home game and it’s going to be a good one.”

The Browns host the Texans, who beat the Jaguars on Sunday. The Browns are expected to reach the playoffs for a second straight year and can’t afford to stumble at home to a team considered dysfunctional.

Mayfield addressed the team in the locker room after the loss.

“You get 30 minutes — win, lose or draw,” Landry said, relaying Mayfield’s message. “You can’t think this is the end of our season. Obviously it hurts. It was another part of his message. It hurts. Anytime you put the work in that we do each and every day, it f****** sucks. It sucks to lose.

“But you get 30 minutes and you dust yourself off and you give it another go the next week.”

Mayfield started his third straight opener, the first Browns quarterback to do that since Brian Sipe from 1978-80. Mayfield’s 321 yards were the most in a Browns opener since Kelly Holcomb’s 326 against the Chiefs in 2002.

Mayfield had a chance for a big play on Cleveland’s second-last possession. On third-and-7 from the Cleveland 28-yard line, he slightly underthrew rookie receiver Anthony Schwartz down the left side and safety Juan Thornhill broke it up.

Schwartz said he should’ve been stronger with the catch and held on.

“Bad ball. Bad ball,” Mayfield said. “I’ve got to put it on the sideline and let him run under it. I put it in a position to where it was a contested catch instead of it being an easy one for him. That’s on me. I expect to be a whole lot better.

“It’s very frustrating because they’re there. They’re there, but when you play the Chiefs, teams of that caliber, if you don’t execute, you’re going to lose.”

He also pointed to missing a disguised coverage by the secondary and taking a first-down sack after the Chiefs had cut the lead to 29-27 with 10:10 left.

“Held onto the ball a little too long,” Mayfield said. “I’ve got to get the ball out, that’s on me, and then on one of the last drives, the penalties, not letting guys get set. So that’s sloppy ball early on in the season and we’ve got to get that corrected and luckily we play again next week, so we’ll get it corrected and move on.”

The outcome obscures a great first half in which the Browns scored touchdowns on their first three possessions.

“That’s the aggressive play calling and it’s just the fact that we fell behind the chains in the second half and the fourth quarter that we hurt ourselves. That’s what happens when you play a great team like the Chiefs, they’re going to take advantage and win.”

The wait is over: Browns get chance for revenge and incredible start to promising season
Chiefs 33, Browns 29: Cleveland can’t hold lead, fails to get revenge in rematch