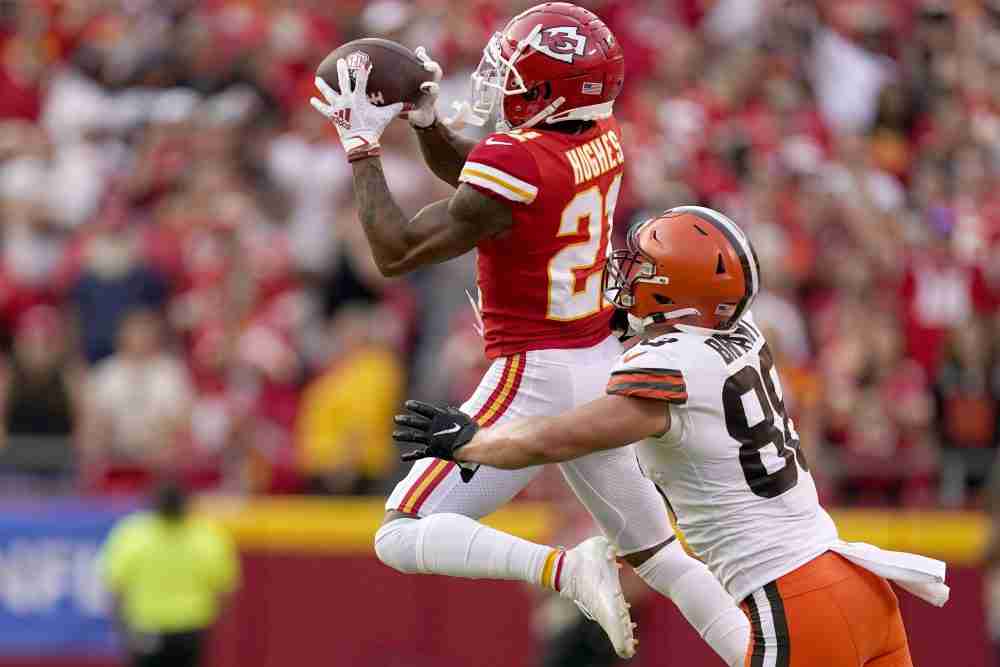 Myles Garrett was given two options. He passed on both.

After consecutive close road losses to the Chiefs — in the playoffs in January and the opener Sunday — the All-Pro defensive end was asked if he’s encouraged or discouraged.

“It’s neither,” he said Sunday. “It doesn’t discourage me because you can go blow for blow with any team on any Sunday.

“That’s a great team that we played today. But if we don’t get the dub (win) it don’t matter at all.”

The 33-29 loss to the Chiefs on Sunday at Arrowhead Stadium covered a range of emotions for players and fans. Quarterback Baker Mayfield and the Browns played great in the first half and still led 29-20 after a touchdown with 10:24 left. But a series of critical mistakes left them vulnerable, and the two-time defending AFC champs capitalized behind incomparable quarterback Patrick Mahomes.

Less than 24 hours later, coach Kevin Stefanski made his feelings clear. He simply said “no” when asked if he came away feeling better about his team.

“We won’t see the Chiefs for a while, and we’ll worry about it when it comes about it. But we know we haven’t beat them yet and if we need to, we need to perform at a higher level to do that.”

Ronnie Harrison Jr. won’t be suspended after ejection vs. Chiefs

Much of the focus is on an inability to finish. The Browns didn’t play as well early in the 22-17 divisional round loss to the Chiefs in January but had an opportunity to take the lead in the final minutes and get another defensive stop. They didn’t do either then and came up short again Sunday.

Mayfield was grabbed around the feet as he tried to throw the ball away on the interception and took the blame for the late inefficiency.

“There is always good and bad that goes with every game, and there was a lot of good,” Stefanski said of Mayfield. “Baker did a nice job in a lot of the operation of what we were doing in a tough environment. Ultimately, he knows he has to take care of the rock and has to throw it away there — I know he was trying to throw it away — but he has to find a way to get an incompletion for us.

“He is very hard on himself. He works at this very, very hard.”

“I would not say this is all a Baker thing and that Baker is going to have to be the one who leads us to the promised land. We all have to do all of the little things to win those games. It is all of the little details and doing all of the right things when the pressure is at its highest and the crowd noise is at the loudest.”

The Browns’ improved coaching and talent should lead to some easy wins this season, but fourth-quarter play is paramount in the NFL, especially against great teams and in big games. They need to be better.

“You need to play clean football,” Stefanski said. “You have to do it for 60 minutes, whether it is the first, second, third or fourth quarter.”

The biggest mistakes came late. Nick Chubb fumbled in the third quarter, leading to a Kansas City field goal, and Gillan dropped a punt in the fourth quarter to set up the winning touchdown.

“It is as much about finishing as it is about doing the right thing for all 60 minutes, no matter where that comes. You could have those mistakes in the first quarter and that could put you behind or it could happen in the fourth quarter and they can say it is not finishing. We just need to be more effective throughout the entire game.”

Cornerback Denzel Ward held the defense responsible, too. It didn’t force a turnover and allowed a 75-yard touchdown to Tyreek Hill in the fourth quarter.

“We have to find a way to take the ball away in the next game and put our offense in a better position,” Ward said.

The Browns were blown out 38-6 in Baltimore in last year’s opener, Stefanski’s head coaching debut. They rebounded with four straight wins, and showed fight Sunday after things started to slip away.

“We have to be a resilient bunch in these 60-minute games,” Stefanski said. “Something is going to happen that does not go your way, and you have to respond to it. I think we have the right guys in this building that will respond when something like that happens in those games because it is going to happen again this week and the week after that.”

Jedrick Wills Jr. “day to day” with ankle injury
Myles Garrett feels like himself in opener after difficult finish to last season