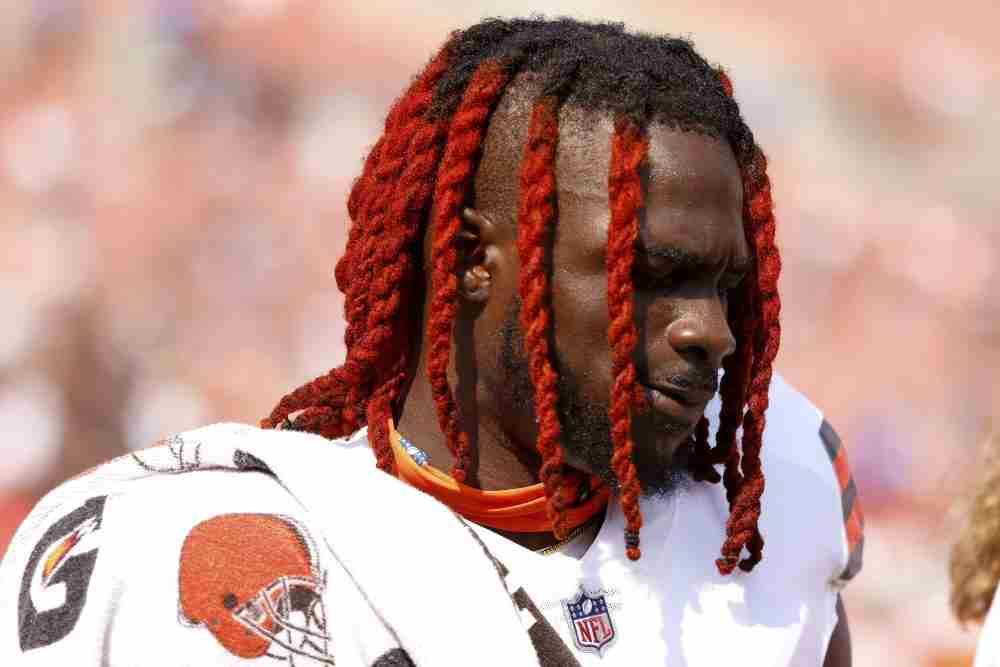 Safety Ronnie Harrison Jr. won’t be suspended by the NFL after his ejection Sunday, a league source confirmed to The Chronicle-Telegram on Monday.

Neither will Chiefs running backs coach Greg Lewis, and the Browns were steaming with the lack of immediate punishment.

Lewis was penalized 15 yards for unsportsmanlike conduct in the first quarter but remained on the sideline Sunday despite pushing Harrison, who was ejected after retaliating with a forceful one-hand, open-palmed shot to Lewis’ upper chest.

“Obviously, Ronnie can’t retaliate. He’s going to get called for that,” center and NFLPA president JC Tretter said Monday, a day after the 33-29 loss. “But we can’t have opposing coaches putting their hands on opposing players. So I expect that the coach gets held to the same standard — if not a higher standard — than Ronnie. Being the first one in there and being a coach, putting his hands on an opposing player, I don’t think there’s any room for that in this league.”

Coach Kevin Stefanski probably agreed but stayed out of the fray.

“I am just going to concern myself with our players and our team,” he said.

The play and its aftermath will be reviewed for discipline by the NFL and fines are possible.

On the Chiefs’ first possession, Harrison missed a tackle of running back Clyde Edwards-Helaire, who had caught a pass, then came back to help bring him down along the Chiefs sideline.

Harrison appeared to get tangled and accidentally step on Edwards-Helaire as he was trying to get off the pile. Lewis shoved Harrison to get him off Edwards-Helaire, and Harrison responded.

“I do think any contact that came from Ronnie was incidental,” Stefanski said. “If you watch the play, it is pretty obvious that he is getting collisioned as he is trying to get off of their boundary.

“That does not excuse him from retaliating. You can’t do that. That is something we all know that the game officials will see the second guy and not the first guy. Ronnie has to show some poise there and not retaliate.”

Referee Bill Vinovich initially called unsportsmanlike conduct on the Chiefs bench, then said after discussion that Harrison was ejected. The penalties offset.

The early departure of Harrison left the secondary short-handed. Grant Delpit was inactive as he recovers from a hamstring injury, and cornerback M.J. Stewart Jr. was forced to take Harrison’s spot at safety.

“It is disappointing when you lose a starter after five plays,” he said.

The Browns appear to have caught a big break on the injury front.

Stefanski called left tackle Jedrick Wills Jr. “day to day” with an ankle injury and didn’t rule him out for Sunday’s game against the Texans at FirstEnergy Stadium. Wills limped off the field in the second quarter then was driven into the locker room.

Chris Hubbard replaced Wills and would continue to do so if he misses more time.

“Chris played well,” Tretter said. “It is always tough to lose a guy in the middle of a game and have somebody come and step in. That is never an easy situation for that player or the entire team. You have to get used to everybody.

“I think we handled it well. Chris is a grizzled veteran. He has been in those situations plenty.”

Wills, the No. 10 pick in the 2020 draft, suffered a high ankle sprain in January in the playoff loss in Kansas City. He left the game after the first offensive snap and didn’t return.

Punter Jamie Gillan dropping the snap was a blunder. Not trying to kick it anyway compounded the mistake.

Gillan had time and room to punt after he corralled the drop. Instead, he tucked it, ran and was tackled at the 15-yard line, well short of a first down.

“Obviously he knows he has a job to do,” Stefanski said. “We expect him to do his job at a high level. If something like that happens, you need to just get the ball to punt it, and he knows that.”

Stefanski disputed the notion the team is being “conservative” with the return of receiver Odell Beckham Jr. from a torn anterior cruciate ligament. He stuck with his “appropriate” description.

Beckham wasn’t ready to go Sunday and was inactive. Stefanski said there’s a possibility he could play Sunday against the Texans.

“Ultimately he is coming off of a major surgery, and we are going to work through it day by day. When he is ready to play, he will play,” Stefanski said.

“I feel he played well,” Ward said. “He did what he was supposed to do. He held his side of the field down.”

** Stefanski was less effusive when asked about rookie second-round linebacker Jeremiah Owusu-Koramoah, who played 25 snaps in the nickel package and had two tackles.

“He had some good moments,” Stefanski said. “There is a ton that he needs to clean up, but he played fast and he is going to work at it. I know that. That is kind of how it goes for rookies.”

** Defensive tackle Malik McDowell got the start in his first NFL game after being drafted in 2017. He played 45 of 63 snaps and had three tackles, including one for loss.

“He did a really nice job,” Stefanski said. “You saw it on the very first play of the game. He was disruptive and made a play. We are counting on him to be that type of guy.”

“Man, I love this atmosphere,” he said. “It’s good to see football back in its natural state, stadiums feel like this, one of the loudest stadiums we’re going to get all year.”

** Cornerback Greedy Williams played eight snaps after missing all of last season with a nerve injury in his shoulder.