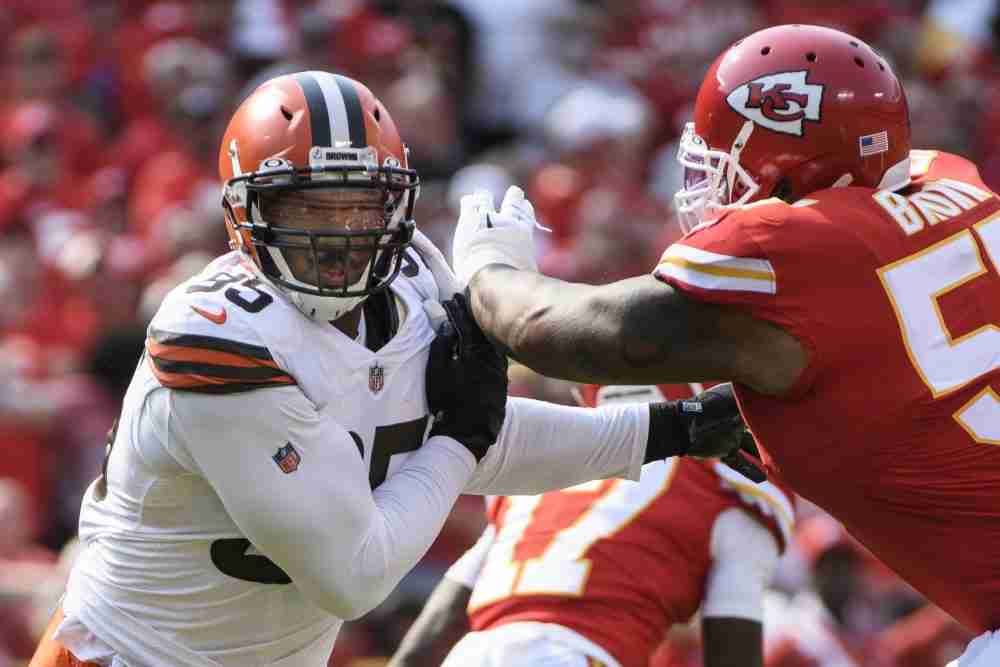 Myles Garrett exploded off the ball. He flew around the edge. He made life difficult for new Chiefs left tackle Orlando Brown.

Garrett looked like Garrett on Sunday during the 33-29 loss at Arrowhead Stadium. That wasn’t the case for the final seven games of last season, when he struggled to recover after missing two games with COVID-19.

“I felt good,” the All-Pro defensive end said after the game. “First game, going to be a little bit tired, it’s a different pace than obviously what you’re going to get in practice. For most of the game I was feeling good, feeling like myself, feel I could get off the ball, doing things that I’ve been showing that I can do. For the most part, I feel like I put on a good showing.”

Garrett saved his best play for last, sacking Patrick Mahomes on third down to force a punt in the final three minutes. Garrett gave the offense a chance to pull out a win, but Baker Mayfield was intercepted.

Garrett was credited with another quarterback hit and had several other pressures of Mahomes, but the Chiefs quarterback is so slippery and aware he’s infuriating for pass rushers.

New Browns end Takkarist McKinley had him in his sights for a loss in the red zone in the second quarter, only to see Mahomes make a move, get past him and score on a 5-yard run, turning a field goal into a touchdown. Second-year tackle Jordan Elliott closed in on Mahomes toward the Browns sideline in the fourth quarter, but Mahomes threw deep across his body into the center of the field — a no-no for mere mortals — and receiver Tyreek Hill turned it into a 75-yard touchdown when safety John Johnson III lost sight of him.

“I don’t want to take away from the greatness of those two players, but he was under duress, he threw it up, it wasn’t a good ball,” Garrett said. “I mean, those guys make plays like that. We have to be a little bit more aware and bat that down and it might be a different game.

Garrett joined coach Kevin Stefanski and Mayfield in lamenting the mistakes that turned a 29-20 fourth-quarter lead into a loss.

“They started to come on, we had too many MEs (mental errors) and missed assignments on our part,” Garrett said. “They took advantage of stuff like that, they’ve shown that, we just have to be better.”

Garrett wasn’t including a pair of offsides calls against him in the first half. One was declined, and the accepted one didn’t impact the game. He flinched on Mahomes’ cadence both times.

“I don’t feel like I jumped off those two, but the refs are kinda really keyed in on that right there,” he said. “But finally had it timed since about halftime, third quarter, jumped off the ball.”

He believes an occasional penalty is the cost of having a great get-off. And he won’t let the officials slow him down.

“If he changes the snap count and I get one, two, I’m going to keep on firing because that’s my job. I can’t slow down because that’s what they want out of me. If I start slowing down, that gives them an advantage. If I start slowing down, that enables the chips to start getting a little bit more of a hit on me and I’m not able to get into my rush. I’ve got to keep on doing what I do best and that’s getting off the ball and making plays.”

“We have a mindset as a defensive line that we want to get off the ball,” the coach said Monday. “Teams are going to constantly use a snap count, particularly when they are at home. They will always use the snap count against our front, Myles in particular, because they are going to use it as a weapon against him.

“He has to be disciplined in his approach while obviously still maintaining that ability to get off on the snap.”