Analysis: Perfect wasn’t required to beat Chiefs, and that’s a big step even in loss 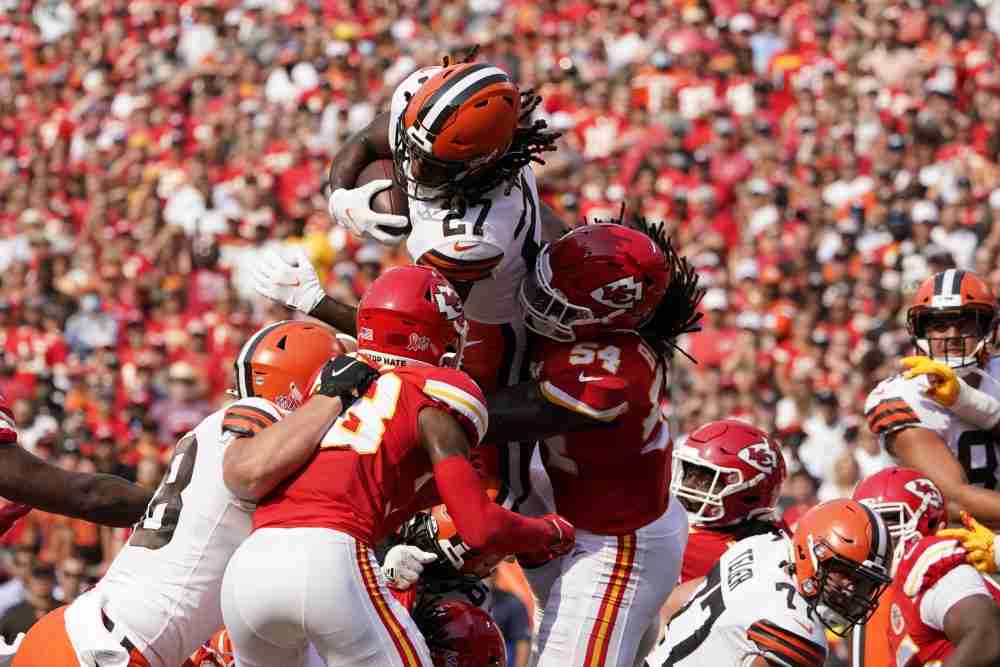 This space at this point of the Browns season has often been used to remind fans it’s only one loss, it’s too early to overreact, the season is a marathon.

That’s completely unnecessary this year. The Browns are talented. They’re well-coached. They’re going to be fine.

And I always expected them to lose to the Chiefs.

I have a point in bringing up the Chiefs’ greatness: The Browns could’ve easily defeated them on the road.

Few teams can say that, especially after a game in which the Chiefs played well, including committing no turnovers.

The Browns self-destructed in the second half with a series of mistakes. Running back Nick Chubb fumbled, punter Jamie Gillan dropped a perfect snap, free safety John Johnson III let Hill get behind him for a 75-yard touchdown and the offense went its last three drives without scoring, including quarterback Baker Mayfield’s loss-sealing interception.

They still only lost by four points.

Yes, the margin for error is tiny against the Chiefs. But the Browns proved it isn’t zero for them.

The Browns played a nearly flawless first half, mixing the run and pass, and had a 22-10 lead at the break. It could’ve been 25-10, but a penalty and sack pushed them out of field goal range on the final possession.

The second half wasn’t anywhere close to as clean, but the Browns still made enough plays that if they eliminate one of the big four blunders, they probably pull out the win.

That’s a sign of progress. That’s reason for hope. The excitement should continue to grow.

A few other takeaways from the opening loss:

Receiver Odell Beckham Jr. telling the team he wasn’t ready for a significant workload and being inactive was a surprise. Perhaps it shouldn’t have been.

Although Beckham has looked great since returning to Berea for minicamp in June — drawing praise and dropping jaws with his fitness level, explosiveness and playmaking in practice — he and the Browns never committed to a Week 1 return. Beckham has only talked to reporters at his youth football camp before training camp and said he would go at his own pace in the return from a torn anterior cruciate ligament. Coach Kevin Stefanski has consistently used “appropriate” to describe the handling of the final stage of the rehab.

I don’t doubt Beckham is physically ready. He’s simply looked too good for too long for the knee not to be stable.

But Beckham’s been dealing with one injury after another since 2017 and must clear the mental hurdle of returning from the worst of the bunch. His comeback will come soon — possibly Sunday against Houston — but there’s no need to force it.

It didn’t make it because safety Daniel Sorensen grabbed his feet. The ball floated, came up short of the sideline and was intercepted, ending the Browns’ chances.

It’s important that Mayfield had the right thought process. But I believe he had enough time to throw the ball away before Sorensen could get to him. He was trying to extend the play, which is understandable, but there was enough time left to take an early incompletion and try again on the next down.

Despite the rocky finish, Mayfield continued his progression from the second half of last season.

Njoku and Schwartz provided downfield targets for Mayfield that were missing in the playoff loss in January, and McDowell started and showed up all day.

** Even with Beckham inactive, Rashard Higgins played only four snaps. He’s repeatedly proved he’s reliable but doesn’t have a special skill set like Schwartz and Donovan Peoples-Jones do.

Higgins, and his legion of fans, will have to be patient in waiting for more opportunities.

** Speaking of Peoples-Jones, he did the absolute right thing on the punt toward the end of the first half.

First, he let the ball land at the 5-yard line with the hopes of it bouncing into the end zone for a touchback. That’s the percentage play.

Then he grabbed the ball after a member of the Chiefs had touched it. Once someone on the kicking team touches the ball, there’s no risk to the return team.

If Peoples-Jones grabs it and scores, it’s a touchdown. If he fumbles at any point, the Browns keep the ball back at the spot of the initial contact by the Chiefs.

He may never develop into a strong returner but he’s certainly smart enough for the job.