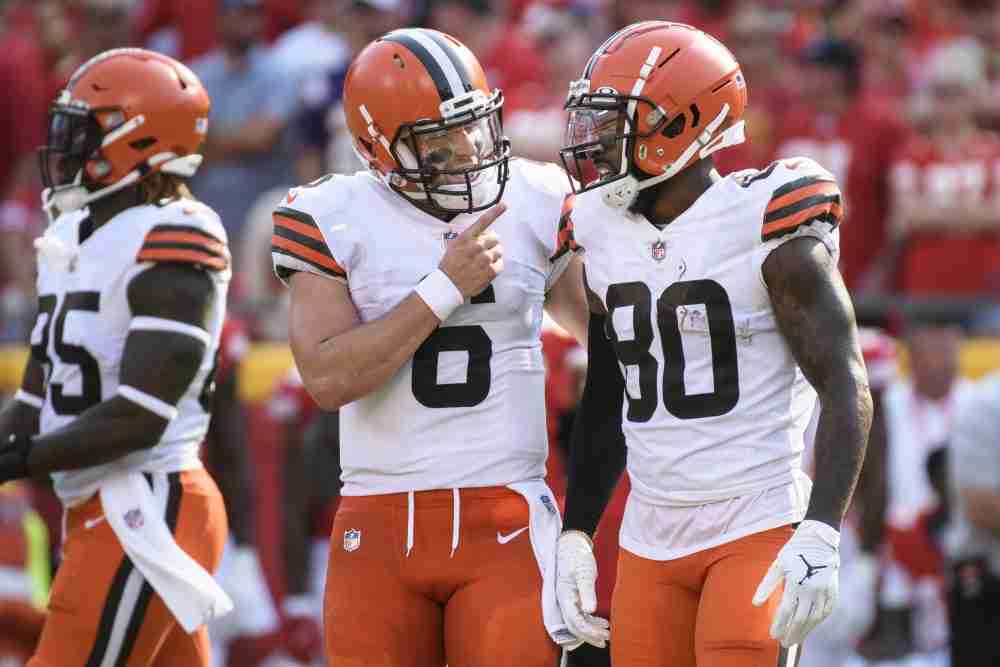 BEREA — Running back Nick Chubb’s first emotion was devastation Sunday after the 33-29 loss to the Chiefs in Arrowhead Stadium. His third-quarter fumble was part of a disastrous second half that saw the Browns blow a 22-10 halftime lead.

“I was thinking like the season was over again because that’s how it ended last year,” Chubb said Wednesday, referring to the 22-17 playoff loss in Kansas City in January. “I had to take a second, step back and realize we have 16 more to go. So it’s not the end of the world.

“We did lose, but we can correct some things. Me personally, I can correct a lot of things and we can go from there.”

Quarterback Baker Mayfield supplied the message Chubb needed to hear. Mayfield listened to the two-pronged discussion in the locker room in the minutes after the game and decided to address the team because so much energy had been poured into the opening rematch.

“Definitely all the time you put in the offseason, the extra week of preparation against that Week 1 opponent,” he said. “Both messages were kind of going around the locker room of, guys had their heads down, you want to tell them to pick their heads up, but then also some guys are saying we’ve got 16 more, we’ve got 16 more. That’s why I said, it’s a fine line of walking. Be critical of yourself, absolutely should be, and I’ll be damned if we’re not because we expect to go in there and win. But there’s also more opportunities, so you have to roll with the punches, face adversity, how do you handle it.

“This one should sting and you need to learn from it because we had that game and we gotta close it out.”

Odell Beckham Jr. ruled out for Sunday vs. Texans, will continue to practice

Receiver Jarvis Landry made a point in his postgame interview to mention the importance of Mayfield’s speech.

“He’s a great leader,” Chubb said. “Him and Jarvis both said something after the game. Just kind of dwell on it for a little while. Let it soak in again and after that we’ve got to move on and keep moving forward.

“It’s a long season. The first game, it’s behind us. We’ve got to put it behind us. Now we’ve just got to look forward to the Texans this week.”

The sting was sharper because of the way the Browns lost. They played a near-perfect first half on offense, scoring touchdowns on their first three drives. But they made too many mistakes as the Chiefs took the lead, then the offense didn’t score on its last three drives, including a Mayfield interception with 1:09 left from the Cleveland 48-yard line.

Safety Daniel Sorensen grabbed his feet as he tried to throw the ball away, causing it to hang up for cornerback Mike Hughes.

“I want to throw it out of bounds. You can say throw it away earlier, but then the coaching points of me trying to use my legs and scramble out and take advantage of some of the yards, there’s going to be criticism either way regardless. Just try and find a way to not have a negative play.”

Mayfield has thrown an NFL-high 16 interceptions in 47 games since 2018. Philip Rivers, who retired after last season, has 15 and Jameis Winston 14.

Mitigating factors are plentiful, including he was a rookie in 2018, has dealt with three coaching changes and threw only one interception over the final nine games last year, but Mayfield said he’s harder on himself when a mistake happens in the fourth quarter.

“Yeah, it’s critical situations,” he said. “You know, those are the moments where you look back and everybody’s going to remember that last play and that can be the difference.

“No matter what has happened previously, you can throw all of that out the window as long as you have a chance. And whoever has the ball last, if you can make a play, those are the ones that matter. You want to make all of those plays in the fourth quarter.”

Coach Kevin Stefanski said Mayfield doesn’t deserve to have the loss pinned on him but needs to grow from what happened.

“Baker is the type of player that he learns in those moments, he learns out here on the field and he tries to bank those reps,” Stefanski said. “Because we’re going to be in another two-minute drive, it might be in this (game), and you’ve got to hopefully apply those lessons learned moving forward.”

“Doing anything we can to win. That’s always been my mentality,” Mayfield said. “That’s the type of guy Baker is, the type of player he is and person he is,” Chubb said. “He loves this game of football. He’s willing to do anything he can to make a good play for all of us. He’s just a great player. He’ll put his head on the line for us.”

Analysis: Perfect wasn’t required to beat Chiefs, and that’s a big step even in loss

Mayfield also was involved in the sequence of laterals on the final play of the first half that ended short of the end zone.

“Was not supposed to be there, but I had a little fun doing it. It was a good time,” he said.

Despite the ending, he left Kansas City with a sense of optimism.

“We started fast, that was a big emphasis for us,” he said. “Now we just need to obviously finish. But it comes down to us doing our job. All the little things matter. Like the illegal shift penalties, staying ahead of the chains, all those little things matter, especially when you’re on the road against a great team like Kansas City.

Forgotten First: A look at NFL trailblazers, including Browns’ Bill Willis, Marion Motley
Odell Beckham Jr. ruled out for Sunday vs. Texans, will continue to practice