Commentary: When do we get the OBJ we were promised? 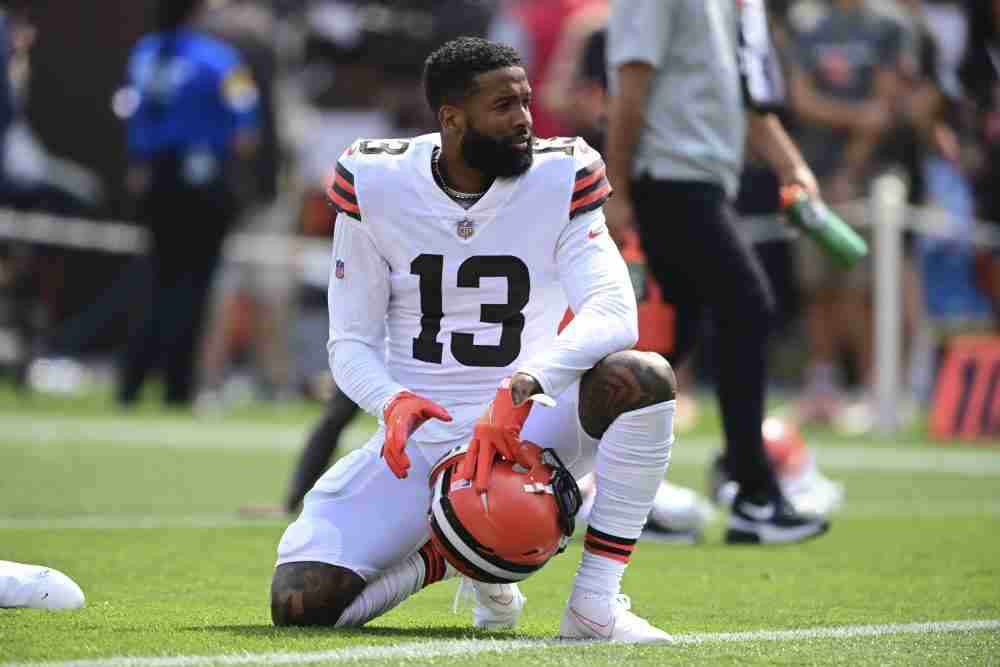 This would have been the perfect week to wonder whether this is the week that Odell Beckham Jr. will return to the Browns’ lineup. Browns fans could use a diversion to help them recover from the frustration and disappointment they felt last Sunday when their team was the better team, but still lost to Kansas City.

Beckham is the perfect man for the job because Beckham has a Ph. D in Diversion.

But Kevin Stefanski, like most coaches, not a big fan of diversions, said before Wednesday’s practice that Beckham will not play in Sunday’s game against Houston.

So the vigil continues as Beckham continues to be the Browns’ shadow man. File him under “coming attractions,” but he won’t be coming to an end zone near you this week.

The entertainment industry has always been replete with showmen who know the value of making the audience wait. Of increasing the anticipation, which escalates the appreciation when Elvis finally takes the stage.

Show business was built on such telltale titillation, and Beckham is becoming the Browns’ Elvis, with Stefanski his Colonel Parker.

Wednesday’s announcement by The Colonel means that this is still not the proper time to re-introduce the Browns’ consummate showman to the masses.

They’ll be plenty of time for that later. For now, the Browns are playing the Houston Texans, who are nobody’s idea of an immovable object. Tyrod Taylor, who, a few years ago, was the opening act for the Baker Mayfield Era, is currently Houston’s quarterback du jour, replacing the Texans’ former starting quarterback who, well, let’s not even go there.

The point being: Given that the Browns could have and should have beaten the Chiefs without Beckham, there’s no reason to believe they absolutely need him to help them beat Houston. At last glance, the Browns were favored by 12 points.

Stefanski obviously wants to give His Beckhamship at least another week off, just to be safe, and the Browns are playing an opponent against whom they could safely do so, without fear of hearing, following an unthinkable outcome, an echoing chorus from the Dawg Pound of, “If only Beckham had played!”

On the other hand, Sunday’s game between the Texans and Ohioans seems to carry the allure any consummate showman worth his greasepaint would covet: The first home game of the season, in front of a diva-friendly full house of adoring fans.

“Ladies and gentlemen, Elvis has entered the building!!!”

Let’s be honest. Professional sports are a form of show business, and there’s nothing wrong with that. It’s the way it should be. It’s the reason the high-five was invented.

Beckham is all the above.

A late entrance to a new season is right in his wheelhouse.

That’s he’s returning — eventually, we assume — to a team with the loftiest of expectations makes it even more dramatic still.

For all those reasons, this week’s game seemed like the perfect time to re-launch the Odell Mothership. The Browns are at home, playing before a full house for the first time in two years. They’re playing against an overmatched opponent/innocent bystander with the misfortune of being next on the schedule of an ornery team still fuming over a blown chance the previous week to shock the world with an emphatic, statement-making victory.

Somebody has to pay for that, although the expected beatdown by the hometown team will be administered minus their most accomplished thespian. Stefanski pulled the plug on that on Wednesday, mindful, as he undoubtedly was, that as great as a fully-engaged Beckham can be, the Browns didn’t exactly curl up into a fetal position after a torn ACL prematurely ended OBJ’s 2020 season.

Would he have been a difference maker last week in Kansas City? We’ll never know, because he evidently wasn’t ready to play. End of discussion.

When will he play?

For what it’s worth, Bengals quarterback Joe Burrow had his ACL surgery Dec. 2, nearly a month after Beckham’s surgery Nov. 10. Burrow is playing. Beckham is not. What should we make of that? Nothing. All surgeries, all patients, are different.

What we CAN make of the loss of Beckham last year, plus the first two games this year, is that the Browns last year were 4-2 with him, and they are 8-5 without him, including two losses to Kansas City.

So, as the audience squirms restlessly in their seats over the news that an understudy will again appear in one of the production’s starring roles, the marquee out front says it all.