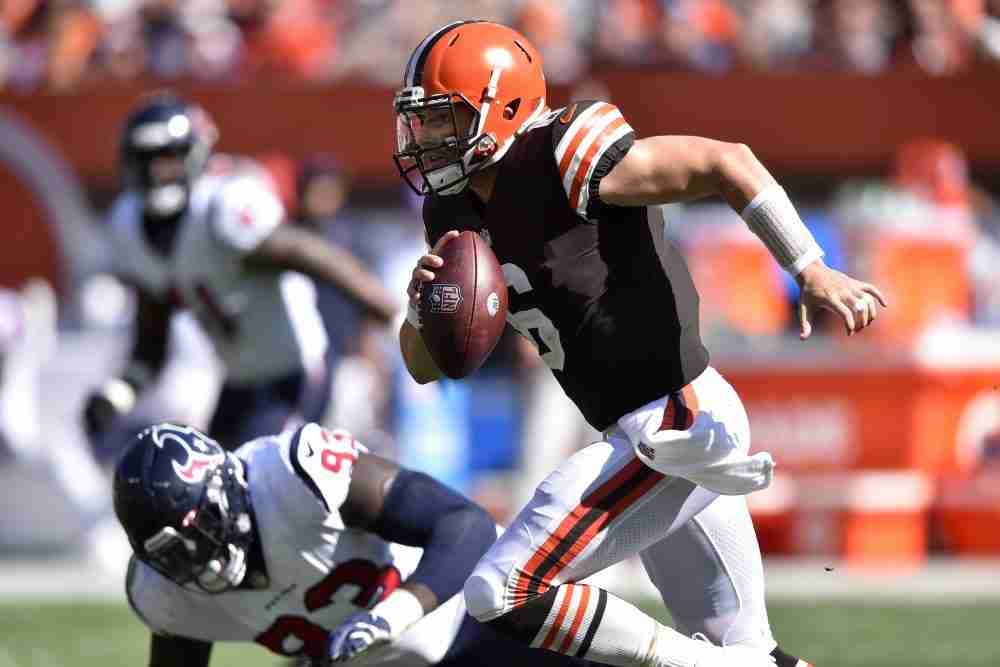 CLEVELAND — Baker Mayfield looked right, pumped, then took off to the left. A pump-fake froze the last defender, he finished the 5-yard touchdown scramble and fired the ball into the wall in front of the Dawg Pound.

The second-quarter scoring run was his second-most important sprint of the Browns’ 31-21 win over the Texans on Sunday in the home opener at FirstEnergy Stadium.

A few minutes earlier, Mayfield sped out of the locker room and onto the sideline with his left shoulder popped back into place. He didn’t miss a snap.

He said there was no chance of that happening, or being denied the touchdown.

“I was just going to get in there no matter what,” he said.

Mayfield hasn’t missed a start since he took over the job in Week 3 as a rookie in 2018. His toughness was on display again after the non-throwing shoulder got dislodged as he attempted to tackle safety Justin Reid after an interception.

“I think he was just playing up to the cameras,” defensive end Myles Garrett joked. “He was rolling his shoulder a little bit, rub some dirt on it and get back out there. But the guy is tough. Honestly, I wouldn’t say he’s a carbon copy, but he’s like Brett Favre 2.0. Less picks, though.”

“We all know Baker’s super tough and it’s not in the back of my mind that he won’t be back,” running back Nick Chubb said.

Nearly as impressive was Mayfield’s accuracy. He completed 19 of 21 passes for a career-high 90.5 percent.

The only misses were an overthrow down the seam for tight end David Njoku and the interception, which came on the next play. Rookie receiver Anthony Schwartz was the intended target over the middle but stopped on the route.

Commentary: Win over Texans a reminder of how fragile even the best rosters can be

Mayfield finished with 213 yards, a touchdown, an interception, two sacks and a 105.0 passer rating. He deflected Garrett’s Favre comparison.

“I’m not doing it for any gratification or anything,” said Mayfield, who improved to 15-8 at home as a starter. “I put in the work during the week, come out on Sundays because I truly love this game. So it’s just one of those things, you’re going to have to grit things out.

“Everybody’s fighting through something. So I’m going to tough it out, just because these guys are, as well. I’m not getting hit every play, so when I do, let’s just go. Let’s roll with it.”

The Browns (1-1) lost receiver Jarvis Landry to a knee injury on the second play — he’ll have an MRI on the medial collateral ligament Monday morning — were sloppy early and had to hang on late despite the Texans (1-1) losing quarterback Tyrod Taylor for the second half to a hamstring injury.

Jarvis Landry injures MCL on 2nd play, will have MRI on Monday

But the Browns gave the first capacity crowd since 2019 what it came to see. The fans lined up Saturday to fill the Muni Lot on Sunday morning and exploded when the Browns took the lead for good.

Rookie Demetric Felton caught a quick hitch from Mayfield behind the line of scrimmage, did a nifty spin move, broke another tackle and sprinted into the end zone for a 33-yard touchdown. The first of his career came with 7:50 left in the third quarter.

Mayfield shook off the injury — he said the shoulder popped in and out — to complete his final 10 passes for 103 yards, including all eight in the second half. The last time a Browns quarterback was that efficient in a second half was Vinny Testaverde going 11-for-11 on Dec. 26, 1993.

“I thought our guys did a great job of securing the catches, and we did a good job of just taking what was there,” Mayfield said.

“He was really sharp,” coach Kevin Stefanski said. “Versus this defense and the zone that they play, you have to be disciplined with your reads and you have to be accurate with your throws. He did a nice job.”

Mayfield acknowledged he was in a lot of pain when he returned, and Stefanski said he changed the game plan.

“It is definitely a luxury having No. 24 and No. 27,” Stefanski said. “But speaking of Nick, when he touches that rock, he can go. Not many teams have guys like that.

“He is just so physically strong that it is hard to get him on the ground and hard to tackle him. When he does get out in the open field, he has great speed for a back that size. It is pretty impressive.”

Chubb welcomes the responsibility of finishing off victories.

“If you put it in our hands, the running backs and the O-line, I am sure we will get the job done, which we have done in the past,” he said.

The Texans had cut the lead to 24-21 with 11:32 left before Chubb’s easy touchdown off right tackle. Houston’s Joey Slye missed a 41-yard field goal with 1:59 left to seal the outcome.

The Browns didn’t play nearly as well as they did in the opening 33-29 loss at Kansas City but made enough plays to send the fans home happy. If that’s where they were headed.

“Thought the crowd was outstanding and in their seats right at the kickoff, so I hope they are back at the Muni Lot already,” Stefanski said minutes after the game. “They helped affect the game.”

“It was a great atmosphere,” Mayfield said. “That is what it should be like. This is a traditional and very historically rich franchise that it needs to be a place where people when they have to come here they know it is going to be loud.”

Taylor, who spent 2018 with the Browns, scrambled from 15 yards for the score after Mayfield’s interception to give the Texans a 14-7 lead. He was replaced in the second half by rookie third-round pick Davis Mills.

“I would say there is a ton to clean up,” Stefanski said. “It is all something that early in the season we will look at all of it and make sure we improve.”

“Obviously not an ideal situation. Trying to force him back inside and I think he realized it was me standing right there, so put his head down and ran right after me,” said Mayfield, whose left arm was extended for the contact. “Kind of popped in and out, but it will be good. Nothing too serious.”

The pain was real.

“I was feeling it a lot — thanks for asking,” he said. “It was all right. Played the rest of the game, didn’t we?”