Commentary: Win over Texans a reminder of how fragile even the best rosters can be 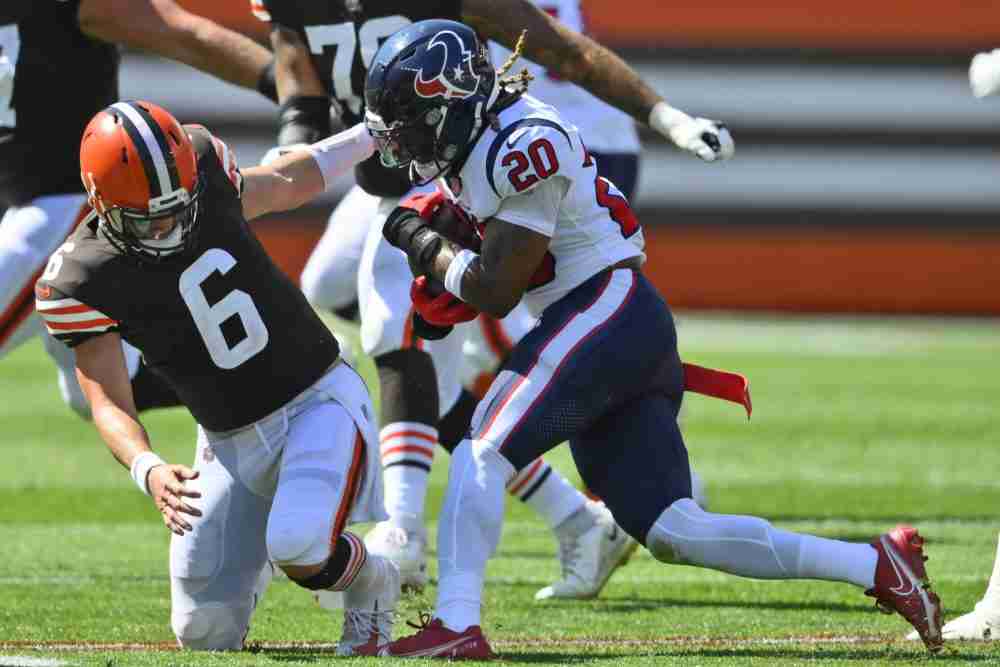 Nothing throws a damper on a town and lights a fire under a team more than the prospect of losing, at home, to a 12-point underdog, using its third string quarterback.

That’s the barrel the Browns were staring down for a brief time on a sunny Sunday afternoon, when the Houston Texans, who obviously hadn’t been reading about how good the Browns are supposed to be, showed up at FirstEnergy Stadium ready to play some football.

The Texans are not the Kansas City Chiefs, and Davis Mills sounds like the name of Patrick Mahomes’ butler not the next quarterback to beat the Browns. But with 11 minutes left in Sunday’s game, the scoreboard told a different story after a Mills’ touchdown pass pulled the visitors to within three points of the hosts, 24-21.

But then Nick Chubb Chubbed his way through Houston’s defense for a 26-yard touchdown, capping a nine-play, 82-yard display of big boy football that stretched the Cleveland lead to what became the final score, 31-21.

The big finish made up for the slow start, but two big gasps in between reminded everyone how fragile a loaded roster can become with a couple of bad breaks.

Jarvis Landry limped to the sideline after the second play of the game, a pass he caught from Baker Mayfield. But the reception came at a cost.

“Jarvis has an MCL injury. We’ll get it imaged in the morning,” said coach Kevin Stefanski.

Landry’s game lasted two plays, and nobody missed him more than Mayfield.

“You don’t ever want to lose Jarvis,” the quarterback said. “Hopefully he’ll be back real soon. He’s a leader on this team.”

Notes: Jarvis Landry injures MCL on 2nd play, will have MRI on Monday

So is Mayfield, but he might want to consider not going overboard in trying to prove it. After throwing an interception that was actually the fault of rookie receiver Anthony Schwartz, who stopped on route, Mayfield hustled over to help tackle the interceptor, but in doing so he banged his left shoulder. He and it hobbled to the sideline.

“It kind of popped in and out,” Mayfield said. “It’ll be good. Nothing too serious.”

But it could have been. Losing Landry and Mayfield in a game is a good way not to win a game. Both players have that hardscrabble DNA that others envy but bemoan when it leads to the loss of two of the Browns’ most important players.

“He can tackle,” said Stefanski of his quarterback, who doesn’t get paid to tackle. “He’s extremely competitive, but I don’t want him to get hurt.”

Mayfield walked slowly off the field, went into the injury tent, then sprinted to the locker room, then came quickly back out to the bench, and was back in the game — as Browns fans’ hearts began beating again — in time for the Browns’ next possession.

“He’s a very competitive young man. He wants to be out there with his teammates,” Stefanski said.

The Browns probably dodged a bullet with Mayfield, but depending on what the MCL photographer finds, Landry potentially could miss some time. The good news: it wasn’t the ACL. Wouldn’t it be ironic if the Browns’ Mr. ACL, Odell Beckham, Jr., was activated just in time to replace his best buddy?

For now, the Browns are no longer winless in 2021. They have put a victory between themselves and the Kansas City loss, so that’s a good thing.

It did get a little hairy late in the game, but that was because the Browns didn’t take care of business earlier in the game.

Turnovers, which are like an ingrown toenail to Stefanski, reared their ugly head again. After committing two turnovers in the Kansas City game, the Browns had two turnovers in the first half against Houston. One was Mayfield’s/Schwartz’s interception. The other was a fumble by Donovan Peoples-Jones.

Chubb bounced back from his costly fumble in Kansas City by averaging nearly 9 yards per carry — 95 yards in 11 attempts — but the best play of the game was delivered by rookie speedster Demetric Felton, a tour-de-force sprint to the end zone, breaking tackles as he went, and turning a swing pass from Mayfield into 33-yard touchdown reception that broke a 14-14 tie in the third quarter.

It almost certainly was the best play in the NFL on Sunday by a sixth-round draft pick.

“He made an incredible effort. His role will grow,” Stefanski said.

“We’re going to try to get him the ball and see how teams handle it,” said Mayfield.

Despite the 31 points, the offense still sputtered at times.

Asked his opinion of the offense, Mayfield shrugged.

“Not real great. We turned the ball over twice again — just not good. We’re hurting ourselves.”

So after two games, the Browns are 1-1, which, when the schedule came out, seemed the most likely outcome after two games. Landry’s knee is a concern, but Mayfield’s shoulder apparently is not.