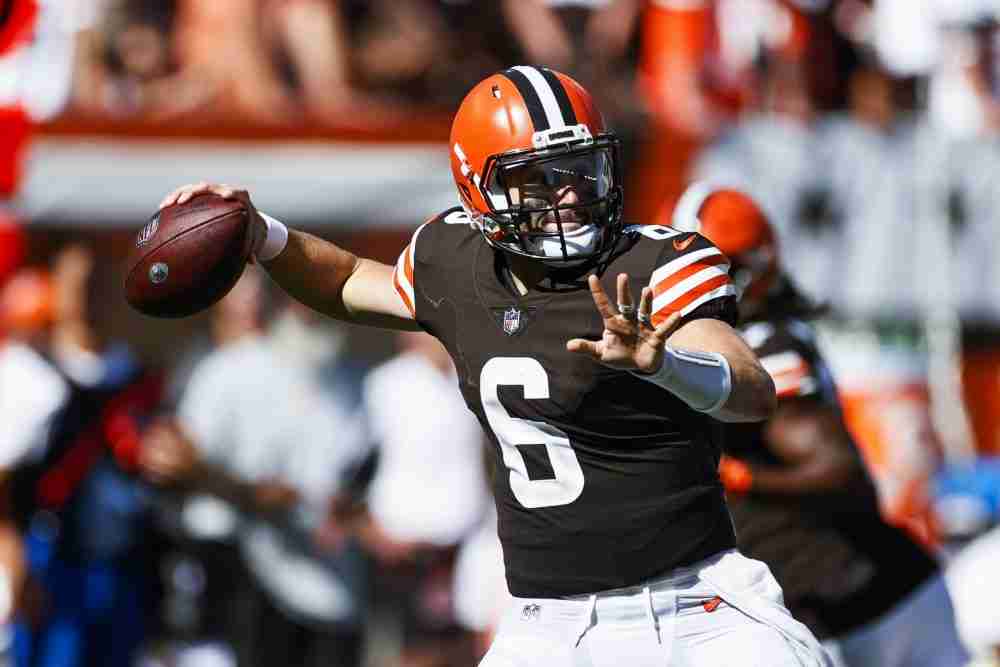 Baker Mayfield played the last two-plus quarters in pain Sunday after his left (non-throwing) shoulder “popped in and out” during the 31-21 victory over the Houston Texans at FirstEnergy Stadium.

“I have not had a chance to talk to Baker yet today,” coach Kevin Stefanski said. “I know obviously our training staff has talked to him. He is doing fine. He is sore.”

Running back Kareem Hunt cringed when he saw Mayfield on the ground after he tried to tackle safety Justin Reid following an interception. Reid went at Mayfield, whose left arm was extended.

“Honestly, I was nervous,” Hunt said. “I told him, ‘Let me tackle him next time.’

The Browns were already without receiver Jarvis Landry, who left on the second play with a sprained medial collateral ligament.

He’s thrown a touchdown pass and two interceptions for a 101.9 passer rating.

Left tackle Jedrick Wills Jr. played 43 snaps on a sprained left ankle before leaving the game. He was replaced by Blake Hance.

“He is no worse for the wear,” Stefanski said of Wills, whose ankle was hurt in the opening loss to the Chiefs. “I am really proud of him for how he responded, wanted to go out there and competed. He got stiff, and I thought it was the right thing to do to take him out.

“I think his teammates recognize that is a big deal when you fight to make it to Sunday.”

“Oh, yeah, definitely,” he said. “He was fighting through it. He’s tough as nails.

“Nobody wants to miss a game. I was just happy to see him out there, and he did a great job for the most part of what he could do. Hopefully with time it’ll heal up some more this week and be ready to go.”

Jarvis Landry week to week with MCL sprain; Odell Beckham Jr. tweets they’ll “hold it down” until he gets back

Linebacker Sione Takitaki is week to week with a hamstring strain, Stefanski said. He started on the strong side Sunday, played 16 snaps and made two tackles, including one for loss.

** Sixth lineman Chris Hubbard (triceps) is also week to week. He was injured in the opener while filling in for Wills and was inactive Sunday.

Rookie cornerback Greg Newsome II was penalized 27 yards for pass interference against receiver Brandin Cooks in the fourth quarter, extending the Texans’ final touchdown drive. On Houston’s next possession, Newsome broke up a deep pass intended for Cooks to force a punt.

“That defensive pass interference, that is a tough play,” Stefanski said. “He is in great position — just have to wait for the receiver’s hands to go up and then your hands go up. He is in a good position so that is a good place to start. We kind of teach off of the tape.”

Stefanski used three timeouts in the final 18 seconds of the first half, forcing the Texans to punt with nine seconds left.

“If you can make them punt, make them punt, because the punter might drop the ball, a bad snap or you get a punt blocked potentially,” he said. “We thought that we could maybe pressure the punter and come out with a big play, and then if it is a punt that you can’t handle as a punt returner, you can let that thing hit the ground, not get near it and let the half bleed out, if you will.”

The decision almost backfired, as Demetric Felton fumbled the punt but was able to hop on it as time expired.

“I was not thrilled when I saw the ball on the ground, but I felt like it was an opportunity to be aggressive with our punt rush,” Stefanski said.

Receiver Davion Davis, who had a good preseason, was waived after serving a two-game suspension from the NFL to start the season. The suspension followed a DUI arrest in 2019 while he was with the Vikings.

Tackle Jordan Steckler was released from the practice squad.

** Felton had two catches and a touchdown in three snaps.