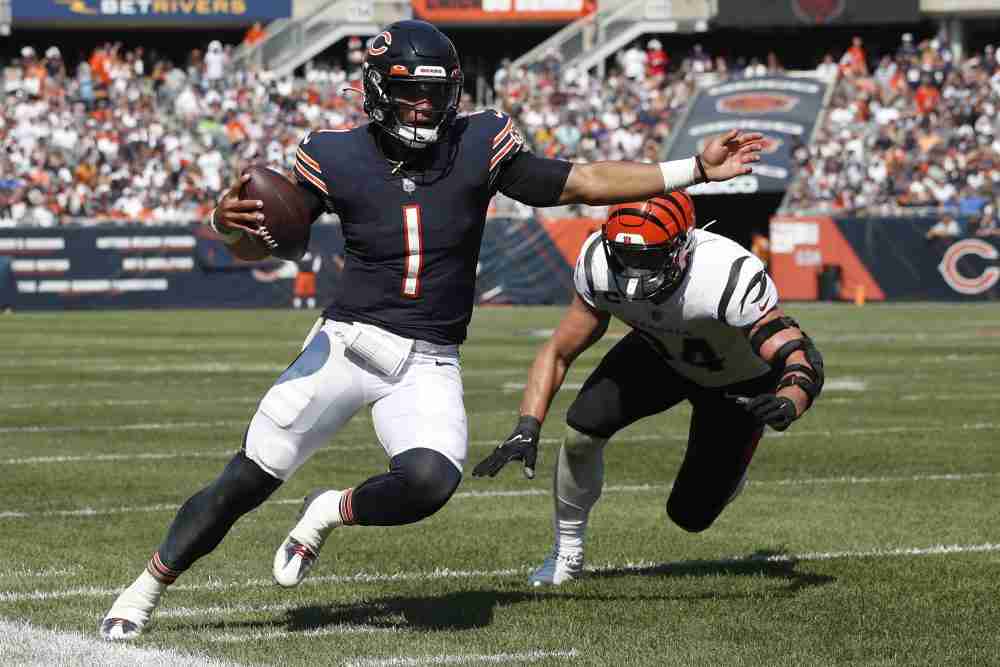 BEREA — Justin Fields started plenty of games in Ohio as quarterback of the Buckeyes.

His first NFL start will come Sunday in Cleveland.

Bears coach Matt Nagy made the announcement Wednesday, as veteran Andy Dalton is out this week with a knee injury. Veteran Nick Foles will serve as Fields’ backup.

Fields played five snaps in the opening loss to the Rams, going 2-for-2 for 10 yards, and replaced an injured Dalton on Sunday in Chicago’s 20-17 win over the Bengals. Fields went 6-for-13 for 60 yards with an interception and 27.7 passer rating. The fourth-quarter interception sparked Cincinnati’s comeback attempt.

“He is a really good athlete,” linebacker Malcolm Smith said. “He was awesome in college. It seems like he can make every throw, and obviously he can make plays with his legs.

“We are just going to try and challenge him. I am sure they are going to have some special stuff built in for him because he is a high draft pick and a special player. We just go out and try to handle it.”

The Browns have already faced scrambling threats in Kansas City’s Patrick Mahomes and Houston’s Tyrod Taylor, but Fields is more of a ball carrier. He’s rushed 11 times for 34 yards with a fumble that he recovered.

“There is no shortage of things they can do with him, and I am sure now with a full week of practice they can expand upon that.”

Odell Beckham Jr. to be full go in practice, not ruled out for Sunday vs. Bears

Wills didn’t practice last week but started Sunday in the win over the Texans and played into the third quarter before being replaced by Blake Hance.

Stefanski continues to use a lot of three-tight end sets with Austin Hooper, David Njoku and Harrison Bryant.

“It forces the defense to have bigger personnel and you can spread them out and do different things since all the tight ends, we can play all different spots and know the offense,” Hooper said. “So we can run base offense out of three-tight end sets where you see Harrison, David and even sometimes myself line up outside the numbers as a wide receiver. So it just gives different looks for the defense to prepare for.”

Hooper has eight catches for 67 yards, Njoku five for 94 and Bryant five for 66.

“It’s awesome. You get all the boys on the field to compete and working with each other, rooting for each other, watching each other have success,” Hooper said. “It’s always a great time. We love it.”

Receiver Donovan Peoples-Jones has been targeted once in each of the two games. He has two catches for 18 yards and lost a fumble Sunday.

“Donovan is a patient guy, regardless,” Mayfield said. “He knows he’s one of those guys that the catches are going to come to him. That’s kinda how last year went.

“He’s trusting the process, as well. He’s a great teammate and he’s trying to do anything he can to help us win, special teams or offense.”

Peoples-Jones has played 93 snaps and will continue to get a large workload following the knee injury that will sideline Jarvis Landry for at least the next three games.

Smith played 58 of 61 snaps vs. the Texans, filling in for injured middle linebacker Anthony Walker Jr. Smith went down in the third quarter and was helped off the field.

“You know that one spot you get bumped on your knee and it kind of takes you out for a second,” Smith said. “It was 10 seconds of intense pain, but it was fine after that.”

Notes: Baker Mayfield “sore” but “doing fine” after left shoulder injury that scared Kareem Hunt
Notes: Coordinator Joe Woods says Denzel Ward is “wired in” but trying to do too much