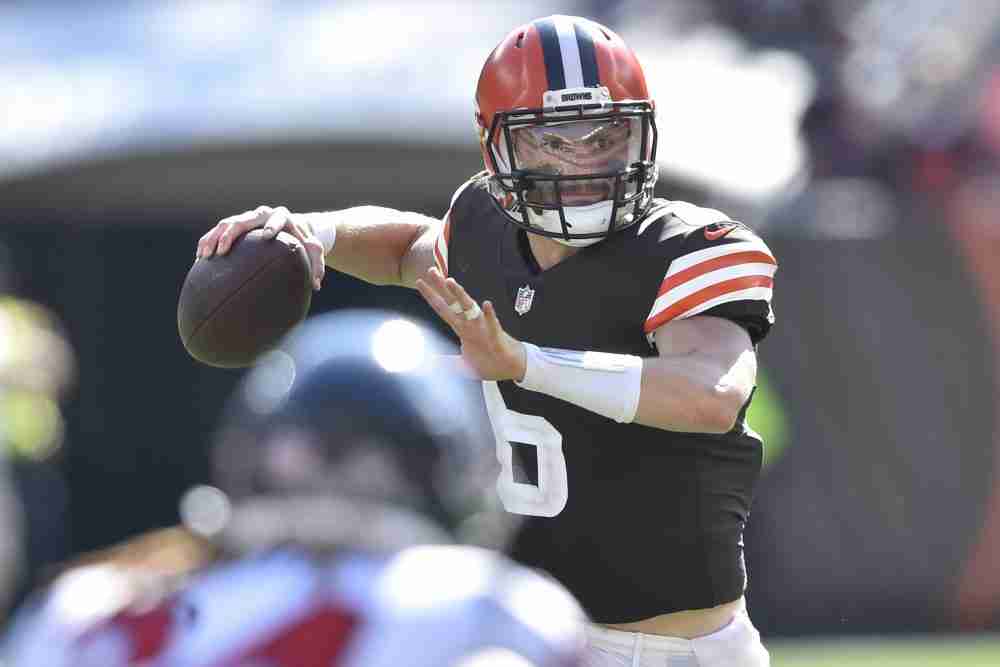 BEREA — Accuracy was high on the list of reasons the Browns drafted Baker Mayfield with the No. 1 pick in 2018.

In the team’s 1-1 start, he’s thrown the ball as well as he has in his four-year career.

He’s not only leading the NFL with an 81.6 completion percentage, it’s third-best through two games in league history.

Mayfield spread the credit as well as he’s been distributing the ball.

“I am very pleased with that because that goes for everybody,” he said Wednesday. “That is protection, that is everybody being in the right spot at the right time, accuracy, ball out on time and those guys making plays and finishing the plays.

Mayfield blamed the incompletion on a bad decision, because running back Nick Chubb was open on a quick hook along the left sideline.

Coordinator Alex Van Pelt agreed with Mayfield that completion percentage is a function of the entire offense but said Mayfield’s improvement plays a big part.

“We always talk about chasing competitions in the quarterback room and he has taken to the task,” Van Pelt said Thursday. “Ball placement, decision-making, living with the checkdowns, all those things combine to a higher completion percentage.”

The high success rate is more impressive given that Mayfield ranks second with 10.9 yards per attempt, trailing only Seattle’s Russell Wilson (11.1). He’s not just making easy throws underneath.

“He is throwing to the open guy and accurately,” tight end Austin Hooper said. “He is doing a great job.”

Mayfield’s reputation as an accurate passer was built at the University of Oklahoma, where he had a 69.8 career completion percentage and topped 70 percent in his final two seasons. He came in at 63.8, 59.4 and 62.8 percent in his first three NFL seasons, ranking 24th, 31st and 30th.

The factors for the drop-off are numerous, including the three coaching changes and three systems he’s experienced. He began to reach a comfort level with coach Kevin Stefanski’s playbook during the second half of last season, and that’s carried over in the on-target start.

While Mayfield isn’t afraid to push the ball down the field — he completed a 43-yarder to Njoku and a 44-yarder to Schwartz against the Chiefs — he’s improved at accepting the short pass to the running back.

“Having those extra completions with those guys, it’s essentially an extension of our run game with the checkdowns and whatnot and that also goes along with what I said about listening to my feet and some of our deeper passing schemes and checking it down and trusting that a positive play’s a good one,” he said. “We’re going to have our shot plays. If it’s not there, that’s OK, we’ll call it again and move on, and I think that’s the growth in our offense and guys being patient and trusting the system.”

Mayfield listens to his feet, but he talks with his hips. That’s easy to see when he rolls left off play-action and twists his body to deliver the strike.

“Getting your hips set to throw is one of the more important pieces, because if you look at my feet when I throw, it’s not exactly orthodox,” he said. “My left toe is closed off to the target, which is not the typical way of teaching throwing. So I think I always try and do a good job of getting my hips set to the target, and that’s why I’m able to do those cross-field throws and some of the shot plays.

“That’s just something that you’ve got to work on, but it’s also I’ve been fortunate to be blessed with.”

He never tried to switch his mechanics and point the left toe at the target. If it ain’t broke …

“I didn’t because I’m a firm believer in you can either throw or you can’t, and that’s just always the way I’ve done it,” he said. “So I’m not going to change that part of it now.”

Baker Mayfield isn’t going to change how he plays, even if it can be dangerous
Odell Beckham Jr. eager to return, won’t commit to playing Sunday vs. Bears, in better place after “spiritual reconstruction”