Notes: Coordinator Joe Woods says Denzel Ward is “wired in” but trying to do too much 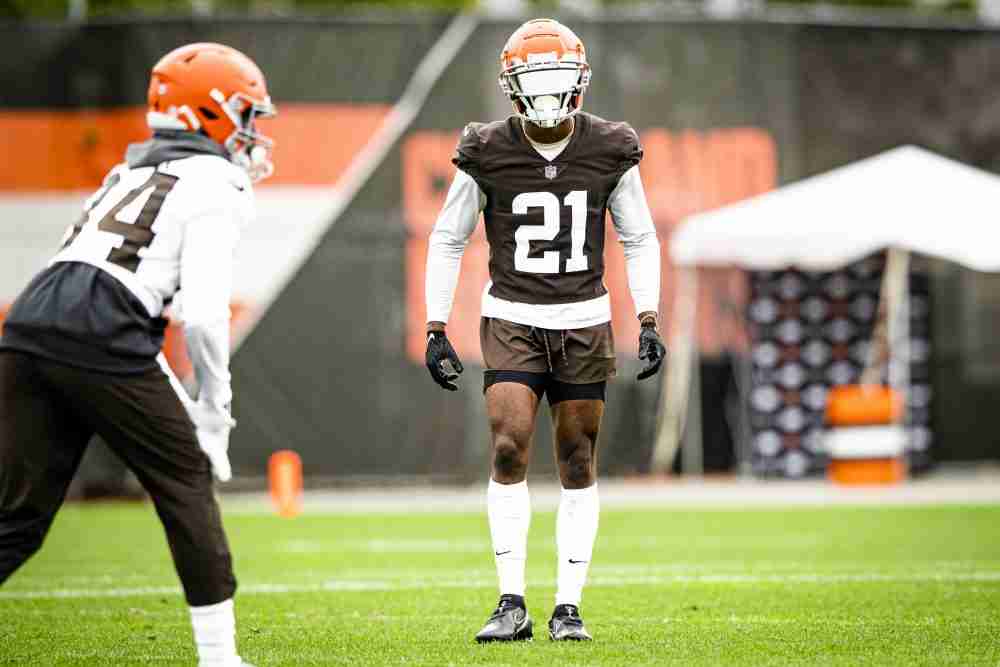 BEREA — Cornerback Denzel Ward gave up three completions vs. the Texans within the first six defensive plays Sunday. They came on a 32-yard skinny post by Nico Collins, a third-and-9 out by Brandin Cooks for 12 yards and a 13-yard slant by Chris Conley.

Ward was in off coverage on the first completion and gave Collins an easy release to the inside. He was up at the line for the next two, and complained to the official about a Cooks push-off on the third-down conversion.

“That happens. You never worry about that as a DB. That is part of life,” coordinator Joe Woods said Thursday of the alleged offensive pass interference. “There are things he did really well, and there are probably some plays out there he would want to have back.”

Ward settled in after the rough start, and Woods wants him to let the game come to him.

“I watch him move around. I try to kind of stand back a little bit and watch the DBs just to see the things that they are doing,” Woods said. “I see him, and he looks stronger, he looks bigger, he looks twitchier and he looks faster. I feel like he is wired in.

“I just think right now he is probably trying to do too much. He is trying to go out and make a play, and when you play DB, you execute your technique and the plays will come. I have talked to him about that, so he just has to settle down and just do his job. He is good enough to make plays when he does that.”

He has a 61.0 grade from Pro Football Focus and has 10 tackles and a pass defensed through two games. The Bears will test him Sunday with receivers Allen Robinson II, Darnell Mooney and Marquise Goodwin.

He was inactive the first two games but could be used this week if he’s healthy because starters Anthony Walker Jr. (hamstring, on injured reserve) and Sione Takitaki (hamstring, week to week) are out. Malcolm Smith, Mack Wilson, Elijah Lee and rookie second-rounder Jeremiah Owusu-Koramoah are the healthy linebackers.

** Rookie running back/receiver Demetric Felton (hip) was added to the report as limited. The injury isn’t believed to be serious.

Felton scored his first NFL touchdown on a 33-yard catch-and-run vs. the Texans and added a 25-yard kickoff return and a 15-yard punt return.

“He has got a long way to go and he will tell you that, as well,” special teams coordinator Mike Priefer said. “I think he is going to improve with every rep that he gets.”

Felton fumbled and recovered a punt at the end of the first half, and Priefer didn’t like that he tried to catch it with a punt block called and only a couple of seconds left.

“Does not always make great decisions, the one at the end of the first half was a little nerve-wracking, but he learned from that,” Priefer said. “He is really smart. He is conscientious, he is trying to get better.”

Owusu-Koramoah played 43 total defensive snaps in the first two games, and Woods is being careful not to overload him.

“It is just a process,” Woods said. “Some of the stuff, you have to protect him from himself.

“I see all kind of packages and things I can do, but I do not want to do so much that he plays slow. We are slowly giving him more, and we definitely design things for him, but I just do not want to put a lot on his plate.”

** Second-year safety Grant Delpit will likely take on a bigger role sooner. He played well in 26 snaps in his NFL debut against the Texans, collecting five tackles, a sack and a forced fumble.

Safety John Johnson III said “the sky’s the limit” for ways in which Delpit can expand the defense.

“I think it’s just like being out there, having those reps, that experience, the possibilities are endless. Hopefully each team presents a different opportunity for us to mix it up.”

Defensive back M.J. Stewart Jr. didn’t get much attention after the game, but Priefer said he got three fingers on Houston’s final field goal attempt, causing it to go left and sealing the Browns’ 10-point win.

“It was great, we had been pressuring him all day,” Priefer said. “I know we had a couple of close calls inside: (Jadeveon) Clowney came close on one and then Denzel Ward came close on another one, but we were knocking most guys back all day long and M.J. got his hand up and that was big.”

Stewart lined up inside of Ward, who was on the edge, and got penetration.

“He got his hands up and he timed it up perfectly,” Priefer said.

The Browns will induct four players into the Browns Legends on Sunday at halftime as part of the annual alumni weekend.

D’Qwell Jackson and Bill Nelsen will be honored as members of the 2021 class, and Josh Cribbs and Webster Slaughter from the 2020 class.

** Special teams coordinator Chris Tabor will return with the Bears after holding the same position with the Browns from 2011-17.

“Very knowledgeable, hard-working, very creative with his different schemes and his fakes,” Priefer said. “He does a really nice job.”