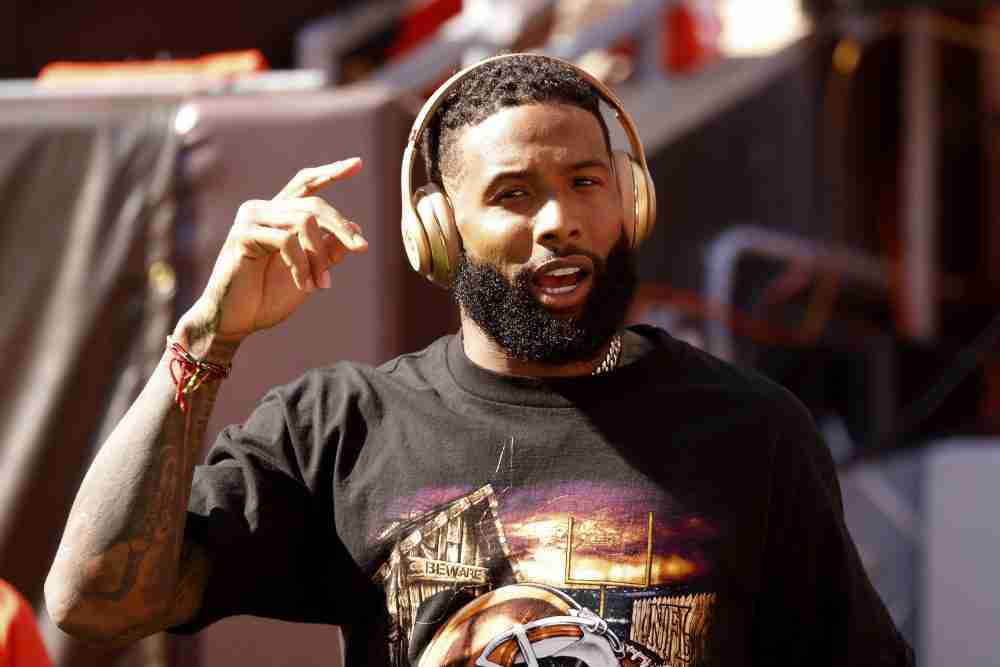 BEREA — Odell Beckham Jr. is determined to reach new heights on the field. He’s in a better place mentally, approaching every situation with a positive outlook. He’s motivated to show kids they shouldn’t give up and should continue chasing their goals.

The journey to this point wasn’t easy.

He worked tirelessly to rehab the torn anterior cruciate ligament that’s sidelined him since Oct. 25, but that was just the beginning of the battle. A four-year string of injuries and professional turmoil had strained him mentally and emotionally.

“It’s tough to stay in it when it has been year after year after year,” Beckham said Thursday in his first interview since training camp opened July 28. “Especially when you started out so fast and had all the goals of Jerry Rice and all these things and you’re slowly just crushed by injury. It’s just hard to mentally and spiritually stay strong throughout all of it.”

He’s emerged on the other side.

Beckham wouldn’t commit to playing Sunday against the Bears at FirstEnergy Stadium, but coordinator Alex Van Pelt said that’s the hope. Beckham was a full participant in practice Wednesday for the first time since the injury and practiced fully again Thursday.

“We’ll see,” the superstar receiver said of his availability, smiling and shrugging his shoulders. “Just working my way back into it. Everything feels good, so just taking it day by day.

“Just keep attacking each day until we get there and we’ll see then.”

Van Pelt said the decision will be made Sunday morning.

“Hopefully he can be able to make it this week,” he said. “He’s looked good so far in practice. We’ll see how he feels later in the week, but we’re hoping.”

They were in a similar situation before the opener Sept. 12 in Kansas City, but after a light workout before the game, Beckham said he wasn’t ready for a significant workload and was inactive.

“The original plan was before even seeing the schedule, it was 11 months post op and now I’m at right around 10½, so the progression started, I started to progress faster and faster and I was definitely itching,” he said. “I wanted to go against that team, but it just didn’t happen that day. I’m just following God’s plan and he’s put me in a good place to be here right now, so it’s just a day-by-day process.”

Special teams coordinator Mike Priefer took a moment with Beckham on the sideline before the game in Kansas City.

“He is a good kid that wants to do well, and he wants to play and I know he wants to come back and I think he has done an amazing job,” Priefer said. “I thought he was ready for Week 1 but I know he has got his timetable and hopefully he can play for us this weekend.”

Beckham has dealt with a series of setbacks since a horrific ankle injury in 2017. Despite the struggles, he said he didn’t think about retiring during the latest rehab, which he said was much easier than after the ankle surgery and “more of a spiritual healing.”

“You’ve seen the stories when I was 23, 24 years old and talking about just being done with the game,” he said. “This time it never really crossed my mind. I wasn’t going to give up. I’m not the kind of fighter who got knocked out on the last fight and I’m going to hang it up. I’ve got to come out and fight again.”

He’s looking forward to his return to the ring.

“Whenever it is, I know I’ll be excited,” he said of his first game. “I’ve worked extremely hard to not only get back but improve and to try and be better than I ever have been.

“It’s been a long time in putting yourself back together and I’ve had my entire team around me through the whole process, great support and it’s going to be special.”

Beckham was Offensive Rookie of the Year in 2014 and a Pro Bowler in his first three seasons. He was traded to the Browns from the Giants in 2019 but has yet to have the expected success.

He played all 16 games in 2019 with a core muscle injury that required offseason surgery and was off to an uneven start last year before getting hurt early in the seventh game. In 23 games, he has 97 catches for 1,354 yards, a 14.0 average and seven touchdowns.

He said the toughest part of the rehab was mental.

“I felt like this one, when I got to EXOS, they had my name, ‘Odell Beckham Jr., ACL rehab,’ and I told them to change it to ‘spiritual reconstruction,’” he said. “This is just my soul that I need to work on, and I found that I’m just in a way better place. My energy, the way that I approach a situation, the way that I approach anything that goes on, I just have a positive outlook on.

“And it changes everything. It was a gloomy day and I come out here and then the sun starts shining. It’s about how you look at it. I’ve got a different aura about me at the moment.”

The offense could use Beckham after receiver Jarvis Landry was placed on injured reserve Tuesday and will miss at least three games. Beckham said Landry’s absence won’t force him to rush his return.

“No, it was just very unfortunate. It’s like playing phone tag with your best friend,” Beckham said. “I went down in the season last year and we dreamed of being on the same team in the NFL and playing together and then the week where I feel like, all right, let’s start, let’s look at it, then he goes down.

“It didn’t speed anything up. He’s a guy who can’t be replaced, his energy, his presence on this team as a leader, captain on this team, you can’t replace him. Just wishing him to get back as fast as possible. This is a dream come true for us.”

The Browns would be down to Donovan Peoples-Jones, Rashard Higgins, Anthony Schwartz and Demetric Felton, so Beckham would be a critical piece.

“Big-time. If he is available, that will be huge for us,” Van Pelt said. “Any time you get great players back on the field, it only makes you better, for sure.”

“I feel like just him being out on the field, his presence is enough,” safety John Johnson III said. “Even if he isn’t taking every single snap, I think him being out there is still going to threaten the defense. It is a little exciting and hopefully we’ll see.”

The road was long, winding and rocky.

“When I hurt my ankle it kind of was devastating to get on the surgery table, for hernia surgery, it’s devastating, knee injury, it’s devastating,” Beckham said. “But it’s just about your why and what do you do it for, and for me, for the kids out there who have that feeling of wanting to give up on something.

“That’s all I can think about is what message would I send to them by giving up now, because I haven’t reached the goals that I wanted to reach, the accomplishments. The things that I set in sight are still not out of sight for me, so I just find a way to keep going, be resilient and try to find a way to get better each and every day.”

He realized at a young age he’d eventually be in a position to inspire kids to chase their NFL dreams.

“I know that I have a responsibility and I don’t take it lightly,” he said.