Notes: Myles Garrett frustrated by chips from Texans … and teammates not taking advantage of the resulting 1-on-1s 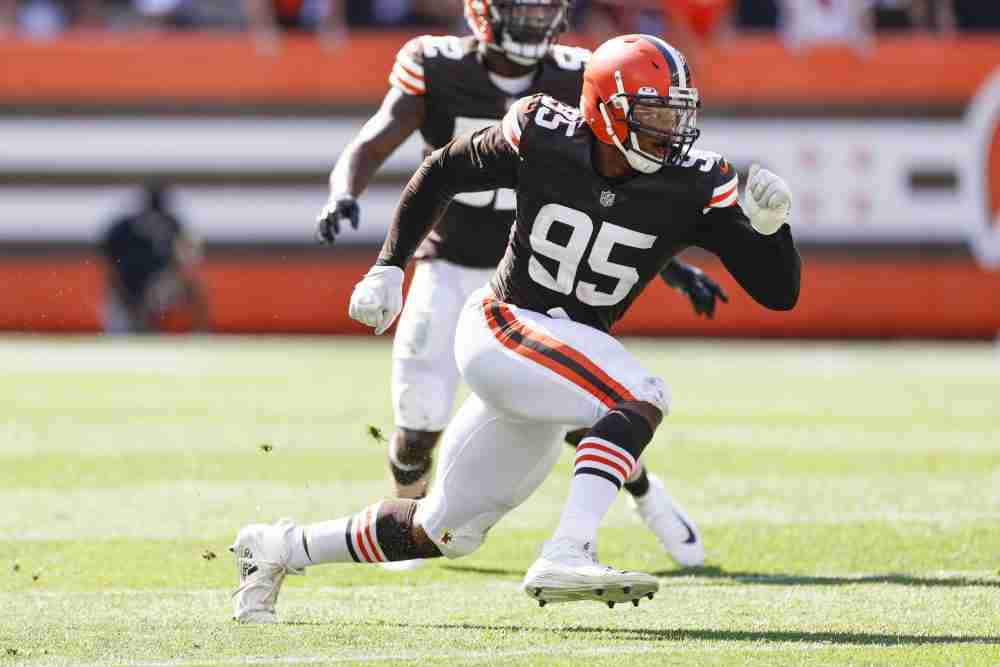 BEREA — Myles Garrett couldn’t dip because the Texans had too many chips.

The All-Pro defensive end drew a holding penalty last week but was held without a sack or quarterback hit in the 31-21 win. He pointed to Houston’s protection plan.

“You all saw it. I don’t think I’ve ever been chipped so much in my life,” Garrett said Friday. “They pay me too much money and that left tackle of theirs, (Laremy) Tunsil, too much money to mess up the show we were supposed to have one-on-one. But I’ve got to expect this and we’ve got to adjust to it.”

The Texans used a running back or tight end to hit Garrett and serve as a double team, which slowed his patented edge rush in which he dips his shoulder to get around the tackle.

Garrett grew frustrated with the extra attention paid to him and his teammates’ inability to capitalize. The only sack came of a blitz by safety Grant Delpit, and end Jadeveon Clowney had the other two quarterback hits.

“It’s tough watching my teammates not be able to make a play,” Garrett said. “Because when I see an offense keying on me with chips and stuff like that, it’s like, well, they’re taking a player out of the play to stop me, so we have one-on-one. And to see that they’re not making a play, it’s kind of frustrating, because I want to see them go out there and make big plays. We’ve got to get there.

He expects the same treatment Sunday from the Bears.

“Nothing’s changed from my point of view,” he said. “I’m still healthy, so I think they’ll give me the same kind of respect.”

Coach Kevin Stefanski said Garrett’s the type of player who can dominate any week but acknowledged it won’t be easy.

“He gets a ton of attention. He is getting chipped. He is getting double-teamed,” Stefanski said. “The production in terms of sacks, as we all know, they sometimes come in bunches, but we have really focused on playing solid defense, being true to our rush lanes and being sound in what we do as a defense.”

Garrett expects coordinator Joe Woods to adjust if he continues to be chipped so often.

“Games, stunts, blitzes, just trying to mix up the front so that they can’t just get a key on me on one side or the other,” he said. “Because no matter where I was, left or the right, they were having someone sitting, waiting for me.”

Defensive backs coach Jeff Howard invited her. She shared her story with the defensive backs and talked to coaches, players and support staff.

Stefanski asked her to address the team after practice and she broke down the huddle.

“Just my second biggest dream ever while wearing my first,” Nageotte tweeted.

Just my second biggest dream ever while wearing my first 😭❤️ https://t.co/5gHjk3rJYM

Left tackle Jedrick Wills Jr. (ankle) practiced in a limited role after sitting out Wednesday and Thursday. He was listed as questionable on the injury report but is on track to play.

He didn’t practice at all last week but started vs. the Texans and played into the third quarter before the ankle got stiff and he was replaced by Blake Hance.

“He got through it pretty well today,” Stefanski said. “He is trending in the right direction. Ultimately it is a great message to your teammates when you are injured, you do not stay injured and you really fight to get back out there and compete with them.”

Wills tested the ankle before the game last week and was able to play.

Stefanski challenged the fans to be even better Sunday and to bother Bears rookie quarterback Justin Fields, who starred at Ohio State.

“They have a rookie quarterback starting and making his first start, who a lot of our fans are probably used to cheering for. In this case, we have to make life really hard on their offense,” Stefanski said. “Expect everybody in their seats at kickoff and then really expecting everybody to be loud throughout — do not wait until third down.”

** Stefanski said he was excited to meet former players during Alumni Weekend.

Notes: Coordinator Joe Woods says Denzel Ward is “wired in” but trying to do too much
Notes: Chase McLaughlin gets chance, drills 57- and 52-yard field goals