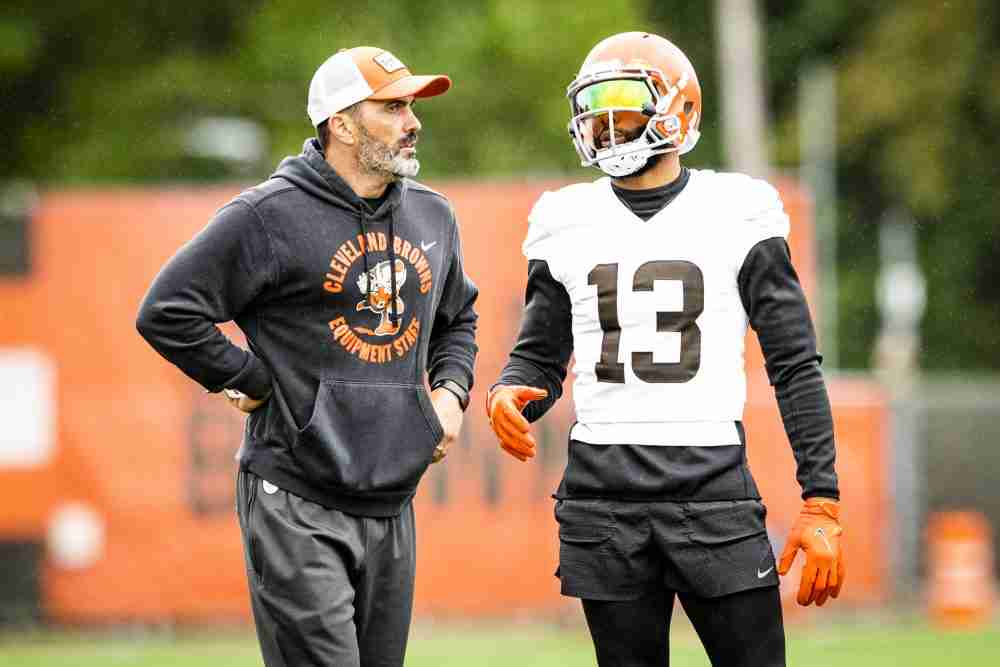 BEREA — Every hurdle has been cleared. No gametime decision or pregame test will be necessary. The uncertainty is gone.

Receiver Odell Beckham Jr. was declared good to go for the game Sunday vs. the Bears at FirstEnergy Stadium.

A torn anterior cruciate ligament deprived fans of watching him for the last 11 months, and that’s about to change.

“We all know what kind of talent he has and what he brings to the field and he looked at me Monday and said, ‘It’s time,’ and I started rubbing my hands together,” defensive end Myles Garrett said Friday. “The world needs to see this man.”

Beckham was a full participant in practice all week and given no designation Friday on the official injury report.

“He had a good week and I think he’s ready to go,” coach Kevin Stefanski said.

Beckham’s ACL tore Oct. 25 against the Bengals and he had surgery Nov. 10. He was close to returning for the opener Sept. 12 in Kansas City but missed the first two games.

“Physically he looks good. He’s in good condition right now,” pass game coordinator/receivers coach Chad O’Shea said. “He’s been preparing off the field with his mental aspect of learning his assignments and doing those. We feel real good about where he is right now both physically and mentally.”

Garrett is eager to see the connection between quarterback Baker Mayfield and Beckham. They spent time together on and off the field in the offseason, then threw by themselves throughout training camp.

“Now we’ve got to see that chemistry out there that was missing last year,” Garrett said. “Those two can definitely be one of the best duos in the league.

“It’s fun to see great players do their thing — not really against us. It’s fun to see players go out there and ball out and I have the privilege to see him on my team.”

Beckham, 28, returned for minicamp in June in great shape and has continued to progress. He has an explosiveness few players do.

“Brings more fire to the offense,” receiver Rashard Higgins said. “Been missing Odell since last year and you guys know what he’s able to bring, electric, he’s explosive, he can do it whenever he gets the ball in his hands and that’s what we’re missing. Can’t wait to see him Sunday.”

Beckham was coy Thursday about whether he’d play, saying “we’ll see” and he’s taking things “day by day.” He left no doubt about his eagerness to return to game action.

“Whenever it is, I know I’ll be excited,” he said. “I’ve worked extremely hard to not only get back but improve and to try and be better than I ever have been.

“It’s been a long time in putting yourself back together and I’ve had my entire team around me through the whole process, great support and it’s going to be special.”

Stefanski said he didn’t know how much Beckham would play Sunday but would stay in “constant communication” with him and O’Shea. Beckham wasn’t limited at all this week for the first time in his return.

“He did everything, he took every rep and he felt good coming off of this field,” Stefanski said. “He is a professional. His attitude throughout this entire process has been really good. He understands that he is out there and he is going to go and try and help his team win.”

Beckham’s return coincides with the loss of receiver and best friend Jarvis Landry, who was placed on injured reserve Tuesday and will miss a minimum of three games. Beckham, Donovan Peoples-Jones, Higgins and rookies Anthony Schwartz and Demetric Felton will be charged with filling the sizable void.

“A tremendous amount of respect for Jarvis as a player and what he brings to our team and now we’re faced with not having him,” O’Shea said, adding Landry remains engaged and helped in film study. “We’re going to do the best job we can of having a good plan for the players to play and hopefully they can bring some of the things Jarvis brings to the field, as far as the work ethic, the passion, the toughness.”

Landry is perhaps the Browns’ No. 1 energy source day in and day out. Beckham provided his own jolt this week.

“Odell always brings energy to practice, which is great,” O’Shea said. “I think that’s something that’s really important is when you have energy at practice it really is a very positive thing. And Odell has certainly done that this week at practice. I’m really excited for him because he’s worked so hard to put himself in position to now play.”