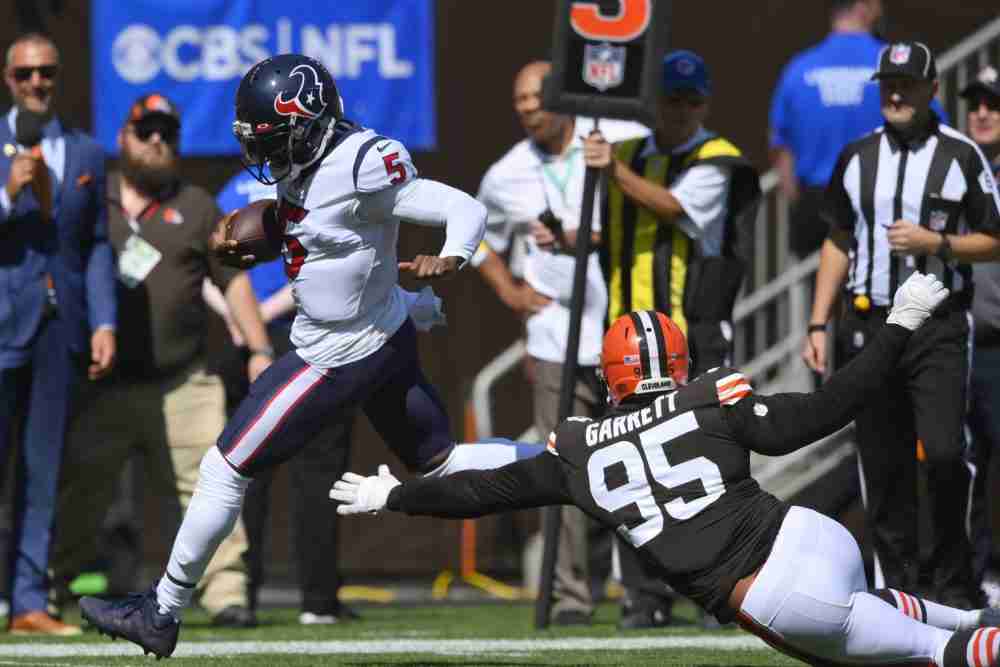 BEREA — The Browns aren’t disputing that the defense has been a disappointment despite the extreme makeover executed by general manager Andrew Berry in the offseason.

“It’s only been two games,” he said Friday. “We just have to work with what we’ve got and improve upon what we’ve got, not try to put the fire out. It’s not a fire yet.”

Safety John Johnson III, the most important piece of the rebuild, wants the fans who are freaking out to look at the calendar.

“We have a lot of new starters and it’s Week 2,” said Johnson, who signed a three-year, $33.75 million contract as a free agent. “I don’t think anyone remembers the first two weeks of any season. It’s usually that stretch in November and December and the playoffs people will remember.

The plea is for patience, not panic. And coordinator Joe Woods, who’s received the loudest criticism, is confident the performance will improve with experience.

“It definitely will because within the game, you see it,” he said. “There are moments where guys execute, we are making plays and we are doing what we are supposed to do, and then you see the inconsistencies. You are just trying to eliminate those, and now you are playing at a higher level.

“We are doing it. You see it. We just need to do it more often and better.”

Woods said he went more vanilla with his calls last week in the win over the Texans because the players weren’t executing the game plan early. A learning curve is to be expected with so many new players at every level of the defense.

Garrett is the only holdover among the starters on the line and is working to develop chemistry with ends Jadeveon Clowney and Takkarist McKinley and tackles Malik Jackson and Malik McDowell. Anthony Walker Jr. and rookie Jeremiah Owusu-Koramoah are new at linebacker. And the secondary features free agent pickups Johnson and nickelback Troy Hill, rookie cornerback Greg Newsome II and safety Grant Delpit, who missed his rookie season in 2020 with a ruptured Achilles tendon.

The Browns will have as many as nine new players on the field together.

“I think we are moving in the right direction,” Johnson said. “We just have to find our rhythm. Guys have to be out there together, and we have to play off of one another. Everyone has to really lock in and do their job.”

The quest for chemistry was hurt by a series of injuries in training camp and a lack of playing time as a unit in the preseason. Part of the latter was a coach’s decision to keep guys healthy, knowing the beginning of the season could be rocky.

Notes: Coordinator Joe Woods says Denzel Ward is “wired in” but trying to do too much

Johnson thinks Woods is still figuring out what he has.

“It’s hard to just up and have the perfect plan for everyone,” Johnson said. “I think Joe is doing a good job of just feeling things out and just trying to find our rhythm.”

The opener was a nearly impossible task against quarterback Patrick Mahomes, tight end Travis Kelce and receiver Tyreek Hill in Kansas City. Woods went with a ton of zone and a conservative approach, but a 75-yard touchdown on a broken play was the backbreaker.

The Texans were a much more favorable matchup, but the Browns allowed 21 points, including a 16-play, 75-yard touchdown drive to rookie backup quarterback Davis Mills after starter Tyrod Taylor left at halftime with a hamstring injury.

“It is progressing. It is the NFL so they are not going to wait for us,” Woods said. “We are working hard to get better in areas that we are not playing well right now.

“It really comes down to all of us just really playing together as a unit. For us as coaches, just making sure that we are game-planning and putting the guys in the positions they need to be in to make plays. It looks good at times, and at times, we know there are things that we need to fix.”

Third down has been the most obvious problem. They rank last in the NFL, allowing 63 percent (17 of 27) to be converted. Neither the pass rush nor the coverage has been consistent enough on the money down.

“You have to fix it,” Woods said. “It just seemed like it was a different thing every time. It is a little bit of everything, including me making a couple of better calls.”

Garrett said it’s natural for Woods to not yet have the perfect feel for what his new players can do.

“Gotta find out what you can do with them and where you can put them to make plays,” Garrett said. “Right now he’s just trying to find the best way to make plays with pieces that he has. We’re chess pieces and he’s a player right now, so right now we’ve got to see what we’re made of and how we can make the most of ourselves out on the field.

“We have a lot of great players, just how he mixes it up and what he chooses to do.”

Linebacker Malcolm Smith said the goal is to keep teams under 17 points.

“So we’re a little behind the 8-ball when you look at things in totality, but we got a great opportunity this week to be great, be dominant, be as good as we want to be,” he said. “So that’s what we’re tying to do this week and preparing for it.”