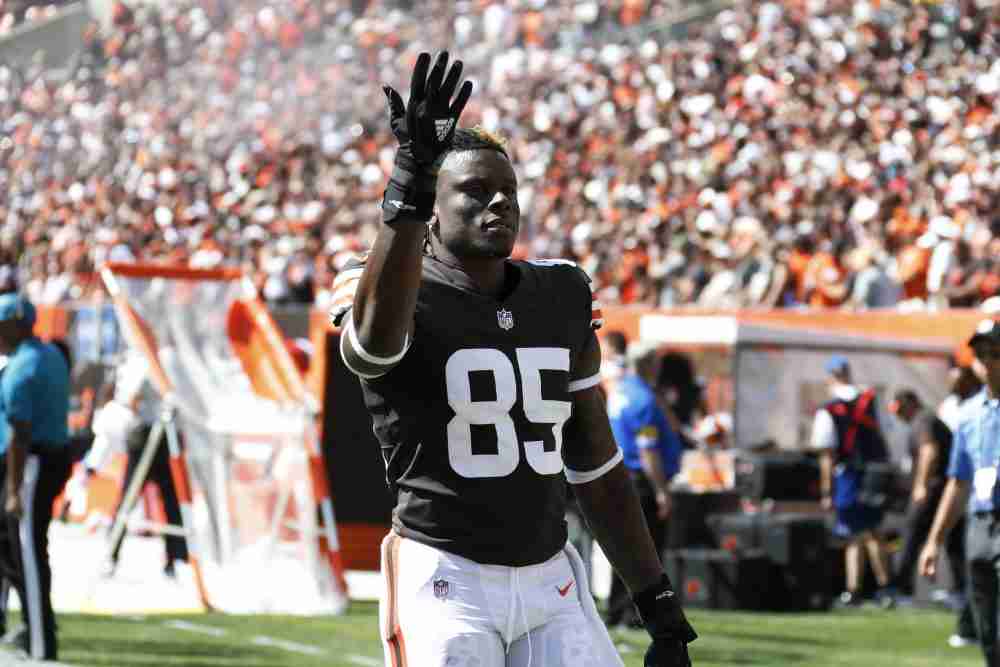 BEREA — Tight end David Njoku streaked downfield for a 43-yard completion in the opener in Kansas City. He leads the Browns with 94 receiving yards on five catches through two games. He’s played 71 snaps (59 percent) and provided reminders of why he was a first-round pick.

“I think David could be a dominant player at the tight end position, both in the run game and the pass game,” coordinator Alex Van Pelt said recently.

A special combination of speed and size isn’t the only thing that enabled Njoku to start the season in style and head into Sunday’s game against the Bears with momentum.

“So it’s just mostly focusing on the right things, not just focus in general,” he told The Chronicle-Telegram. “The right focus is the better focus.”

An offseason trip to Tight End University reinforced Njoku’s belief he’s as talented as anyone in the league. More importantly, it allowed him to see the vulnerabilities of his more established contemporaries.

“There are guys there that I’ve heard of but that I never met that I was very glad and grateful to meet and just talk ball, life,” Njoku said. “It was very encouraging to see everybody, because life is an interesting thing. Everyone has their own demons, everyone has their own problems that they have to overcome. And just hearing some of the prosperous overcomings of my peers, it was great, it was awesome.”

The empowering stories were told at the 49-tight end summit in Nashville, Tenn., started by George Kittle, a two-time Pro Bowler with the 49ers.

“It shows that we’re not just football players,” Njoku said. “We also have other things to take care of. And the fact that they were taking care of the things through the midst of all the problems was very inspiring. It motivated myself along with other people to keep pushing, keep going, keep working through whatever you’re working through because there is light at the end of the tunnel.”

Njoku is in a different place mentally in his fifth season with the Browns after being the No. 29 pick in 2017. The affirmation at Tight End University was the latest step in a journey out of what he described as “a mental pit” in a recent interview with the Akron Beacon Journal.

He feels he’s better equipped to handle the “distractions” that come with life in the NFL, especially as a 20-year-old draft pick.

“So life throws you a bunch of things and you gotta just take it like a man, like an adult, very maturely, and focus on what you’ve got to do in your job aspects,” he said.

More consistency in mindset and approach have led to more consistency on the field, something Njoku lacked during his first four seasons, when he totaled 112 catches for 1,279 yards and 11 touchdowns. Not only would he make spectacular catches then drop easy ones, his performance would fluctuate by the week.

“I just think he’s so locked in on the game plan and trying to execute exactly what his job is each and every play,” quarterback Baker Mayfield said of the improvement.

Njoku would hear the criticism and questions from the media about the lack of consistency and be bothered. He’s put that aside and believes he’s made a big jump.

“Just working hard, staying grounded, leveled mindset,” he said. “Not really looking in the future, but more on just winning every day to take us to the next level.”

Tight ends coach Drew Petzing is pleased with the improvement.

“It is a big adjustment coming from the college game and just the nature of the people who you are playing and the talent level that is on the field with you and that the understanding of one good game or two good games does not make a season and you have to go out and do it every week against really good players at a high level,” he said. “It is a key to having a good career in this league is being able to be consistent and be the same guy day in and day out and every Sunday. I have seen that from him lately. It has been great.”

When Van Pelt mentioned dominance, he included Njoku’s much improved practice habits and a better grasp of his role in coach Kevin Stefanski’s tight end-heavy system.

“I think he sees that now and he is understanding how we are going to use him and help him be better,” Van Pelt said.

Njoku and Austin Hooper share the No. 1 tight end role, and both will be looked to for more production with receiver Jarvis Landry on injured reserve with a sprained medial collateral ligament. Njoku’s ability to get downfield makes him a dangerous threat.

“His ability to run is elite,” Van Pelt said. “We have to find ways to help him stretch the field for us. It is fun when you get him in there and you have a chance to run away from somebody. There are not many guys in those bigger positions that can keep up with David.”

“It opens things up for everybody else, which makes us all better,” Njoku said.

The beauty and challenge of playing tight end is the dual responsibility of catching and blocking. Njoku has the requisite size and strength to block and has committed to the duty.

“How much time he spends practicing it is big,” Petzing said. “He’s working the technique, he’s really getting better at the fundamentals and you’re starting to see that production on the field.”

Njoku has taken to meditation to slow down life and “be where my feet are.” It’s one of the tools to deal with life’s hardships, which included a 2019 season in which he caught five passes in four games and clashed with coach Freddie Kitchens.

Njoku said the toughest part was the injuries, as he rushed back from a broken wrist before he was ready. Two years later he’s in a much better spot.

“It took as much (time) as we needed to take,” he said. “We’re not here to be average. We’re here to push to be the best we can be and to be up there amongst the great ones.”

He wants to make that journey with the Browns, which is an about-face after requesting a trade last year. His strong relationship with Mayfield is a factor.

“Why do I want to stay? I love it here,” he said. “I mean, throughout all the highs and lows, I realized that this is the place that I want to be. I feel like this is the closest I’ve been with any team my whole life. So I wouldn’t want to be anywhere else.”