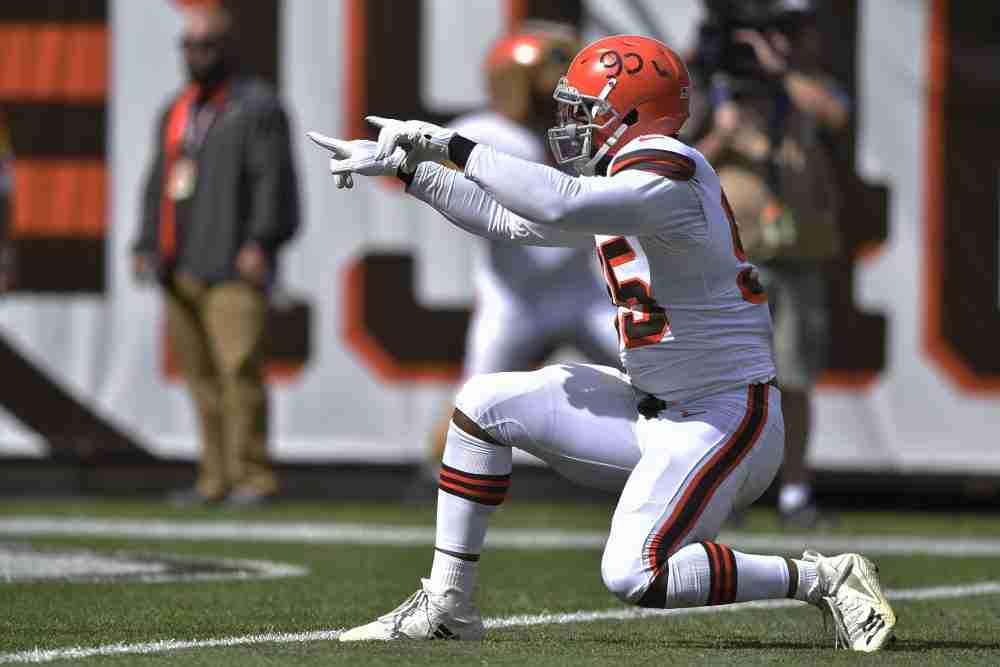 CLEVELAND — Myles Garrett flew around the left edge, got his hands on rookie quarterback Justin Fields but let him slip away. Jadeveon Clowney was right there to finish the job on the final defensive play.

The Browns defense worked like that throughout a thoroughly convincing 26-6 win over the Chicago Bears on Sunday at FirstEnergy Stadium. Garrett set a franchise-record with 4.5 sacks, and when he wasn’t dropping Fields, his teammates were dominating.

The Browns (2-1) totaled nine sacks, second in Cleveland history behind 11 vs. the Falcons in 1984. They set franchise records by holding the Bears (1-2) to 1 net passing yard and 47 total net yards.

“You are supposed to work in tandem, and that is what it looked like today.”

The defense made life miserable for Fields, the No. 11 pick out of Ohio State who made his first NFL start in place of the injured Andy Dalton. Fields was 6-for-20 for 68 yards and a 41.2 passer rating and rushed only three times for 12 yards.

He was hit 15 times, sacked nine times for 67 yards and X-rays on his right hand were negative. The Bears averaged 1.1 yards a play, and their most productive snap was a 48-yard pass interference penalty on Browns safety John Johnson III that set up the second field goal.

Garrett got support from fellow end Clowney, rookie linebacker Jeremiah Owusu-Koramoah and the rest of the swarming unit that had been criticized, along with coordinator Joe Woods, after the first two games. But Garrett was so impressive he overshadowed the return of receiver Odell Beckham Jr. (five catches, 77 yards) and the relentlessness of running back Kareem Hunt (155 total yards, touchdown).

“It’s incredible. I’m not going to sit here and put him in the rankings, but to me he’s just that one,” Beckham said of Garrett. “The things that he can do are absolutely incredible.”

Garrett expressed his frustration Friday with being double-teamed last week in a win over the Texans and his teammates’ inability to take advantage of the extra attention paid to him. Everything worked against a suspect Bears offensive line and a rookie quarterback with little time to throw or room to escape.

“I needed to be there myself,” Garrett said. “There is no excuse that I am getting chipped. I have to go out there and make plays and have to find a way to be effective and produce, as well. We stepped up to the plate and we knocked it out of the park.”

Garrett was effective coming off the edge and when he slid inside and attacked the guards. He even chased down Fields and got him by a shoelace when he appeared headed for a successful scramble.

As he sat on the bench after getting to 4.5 sacks, the crowd serenaded him with a chant of “My-les Garr-ett.” He stood up and raised both arms.

“It’s a moment I’ll remember for a long time,” said Garrett, who did the Cabbage Patch dance following a sack after Browns Legend Webster Slaughter earlier asked the crowd to do it with him. “I just want to be able to be here forever and have that commonplace for me, have a big game and have my name chanted. But I couldn’t have done it without my teammates, our offense giving us a lead and that coverage making him hold the ball.”

The Browns, who debuted throwback uniforms in their 75th anniversary season, took awhile to get going offensively, as Baker Mayfield was sacked on fourth down twice, but put together an important drive to end the first half.

Donovan Peoples-Jones made a nice 18-yard catch down the sideline on third-and-5 from the Cleveland 16-yard line to get things going. Hunt totaled 41 yards on the possession and Mayfield threw 13 yards to tight end Austin Hooper for the touchdown.

“We had talked about it — we needed to go score just to help the defense out,” said Mayfield, who went 19-for-31 for 246 yards, a touchdown, five sacks and a 97.0 rating. “They were playing lights out and to give them some assurance that they were going to have the freedom to play aggressive.”

Hunt took over in the second half, including an electric 29-yard touchdown run, and after a slow start against a tough Chicago front seven the Browns finished with 42 rushes for 215 yards and a 5.1 average. They outgained the Bears 418 yards to 47.

Chase McLaughlin filled in the gaps with four field goals, including 57- and 52-yarders.

Despite some struggles, the Browns’ 1,230 net yards through three games are the most in franchise history. They’ve scored at least 26 points in each of the first three games for the first time since 1964, the last championship season.

But this day belonged to the defense. It entered last in the league on third down (63 percent converted) and got only three hits on Texans quarterbacks last week, then held the Bears to 1-for-11 on third down and harassed Fields from start to finish, including five quarterback hits and two sacks for Clowney, his first since 2019.

“We’ve got too many hungry guys out there who make plays to kind of sit back and be conservative,” Garrett said. “We have to go and it was a game where (Woods) was sending us and we were going in and doing our job. We don’t want to play base, we want to hunt and take the ball away.”

#Browns Myles Garrett on his 4.5 sacks and if it was his best game. pic.twitter.com/GeRgc9VaQa

Garrett was the fiercest of the defenders stalking their prey — even if he fell short of his high school (8.5) and college (five) bests for sacks.

“He needs like six or seven to impress me,” Beckham said. “We’re going to set the bar high for him.”

“Myles is a great player,” Stefanski said. “He is a team leader. We are going to need him to be great. He was great today.”