Mailbag: Does Baker Mayfield need to learn to protect himself? How can defense live up to potential? When will JOK play more? 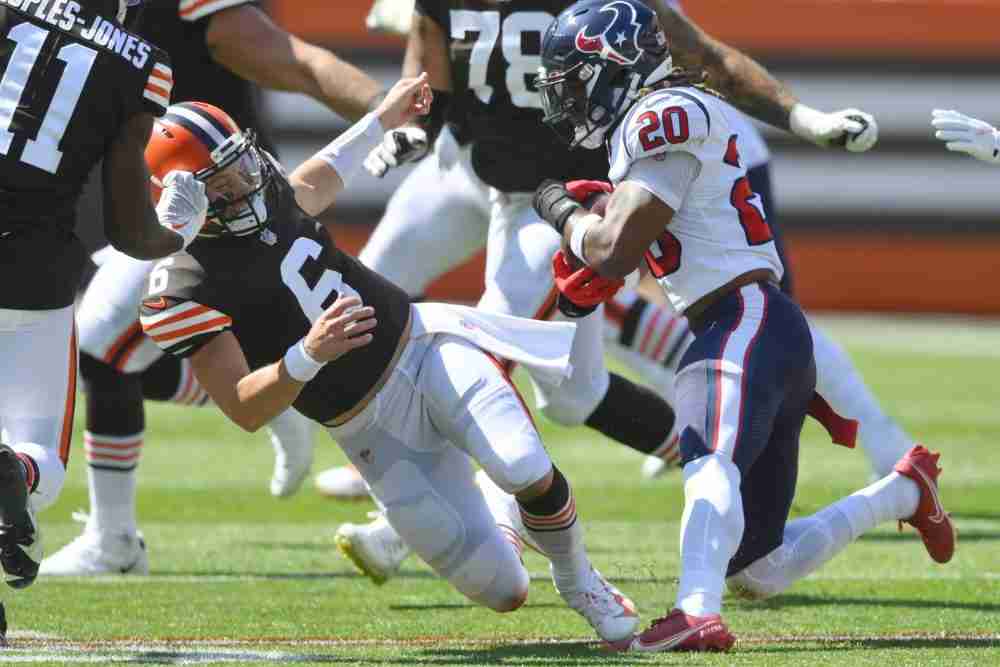 Q: I admire Baker Mayfield’s toughness, it is a huge part of what makes him great, but a serious question here: Is it not best if he can learn in certain situations to just protect himself? For example just be the deep safety when reacting to a rare interception?

A: I completely agree.

I would be wary of coaching the competitiveness and instincts out of Mayfield, but there’s a time and a place and he needs to use discretion. He’s thrown two good blocks on Anthony Schwartz reverses in the first two games and should be able to dictate the contact on those interactions. But he needs to be more careful when running or playing “defense” after a turnover.

Mayfield didn’t slide last week in the win over the Texans and he doesn’t use the safety measure often. That’s a good way to reduce unnecessary contact. The same principle applies to trying to tackle safety Justin Reid after the interception. I understand that every first down matters and a pick-six can be fatal, but losing Mayfield for an extended period is way worse than any one play in a game. The organization would be better off long term if Mayfield was more worried about his health.

Q: Now that the Browns have the personnel on defense, how do they start performing up to their expected potential?

A: The return of safety Grant Delpit will help. His strong debut last week will enable coordinator Joe Woods to use more of his beloved dime package, which should help the overall performance of the defense. Using three safeties will take pressure off the linebackers and help confuse the quarterback.

More time together — between Woods and the players and among the players themselves — should also help immensely. But the defense won’t reach its potential until the front four plays better. That responsibility falls largely on the ends. If Myles Garrett and Jadeveon Clowney dominate, the rest of the unit will look much better.

Q: Should we be expecting more time soon for JOK?

A: Yes. If for no other reason than hamstring injuries to Anthony Walker Jr. and Sione Takitaki. With the two starters out, Jeremiah Owusu-Koramoah is scheduled to start today against the Bears.

Woods has been careful not to put too much on Owusu-Koramoah’s plate this early in his rookie season. I know that’s frustrating for fans, but the coaches know which players are ready to handle big roles. They didn’t hesitate to start cornerback Greg Newsome II or give receiver Anthony Schwartz a huge role in the opener, but not every young player learns at the same rate.

I’m still not sure Owusu-Koramoah will be on the field for the majority of snaps, but an increase will give him the chance to prove to Woods he’s ready for more responsibility. If he succeeds, then his playing time will increase accordingly.

Q: We won our first game. I should be happy. However, they gifted us a muffed punt, they missed a FG, the second-string QB left after the first half forcing the third-stringer to finish, they gave us penalties, and our pass rush (after the investments and hype) was non-existent — they had all day. It seems like we still have some work to do, especially on defense. Am I too pessimistic?

A: I can’t really dispute any of your points — M.J. Stewart Jr. did get a piece of the missed field goal — but I do think you’re being too pessimistic.

A 10-point win anytime is worth appreciating if not celebrating. There’s no doubt the defense needs to play better, especially the pass rush of the front four, but I expect it to get better with time.

I also think it’s important to remember the Browns had two turnovers that stopped promising drives and led to Houston points. So the offense also contributed to it being a closer game than expected.

Q: Are the Browns thinking and scheming too much on defense? How about letting their natural talent take over?

A: I understand the question, but for the most part think Woods has been vanilla through two games. Although he did say Thursday he had to scale back the calls against the Texans because the players were struggling early to execute the game plan.

Perhaps Woods could go with more man coverage, but that leaves the defense vulnerable to big plays. I expect him to stay conservative and keep things simple until he feels more comfortable that everyone is on the same page.

Q: Do you think Myles Garrett is living up to his contract at this point? He’s an amazing athlete, great citizen and puts up very good, if not amazing, numbers. But there is a lingering, but growing murmur that he’s just not as dominant as he should be. What say you?

I refuse to put too much weight on the first two games of a season, so I’m going to use last year as the basis for my answer. He was dominant early and finished with 12 sacks, four forced fumbles and two fumble recoveries despite being derailed by COVID-19. To me, that was worth the money.

But I’m not dismissing your question. Until Garrett lives up to his potential for a whole season — something he admits he hasn’t done — he will be questioned. The Browns had no choice but to give him the five-year, $125 million extension, but more will always be expected from a player taken No. 1 and with his immense talent.

Q: What do you think about reuniting with Jamie Collins and does he fit here?

A: The Browns could use another linebacker, especially with the current injury situation, but I have reservations about Collins. He’s a great athlete but must be in the right mental place to be a worthy addition. I also like him better in a 3-4 scheme.

I haven’t studied his film this year with Detroit but did notice Monday night that he didn’t give maximum effort on a Packers touchdown.

Mailbag: What about 3 TEs, 2 RBs on field together? Where was Richard LeCounte III in opener?
Mailbag: How will Browns fare in tough upcoming stretch? Is Myles Garrett in store for nothing but double teams?