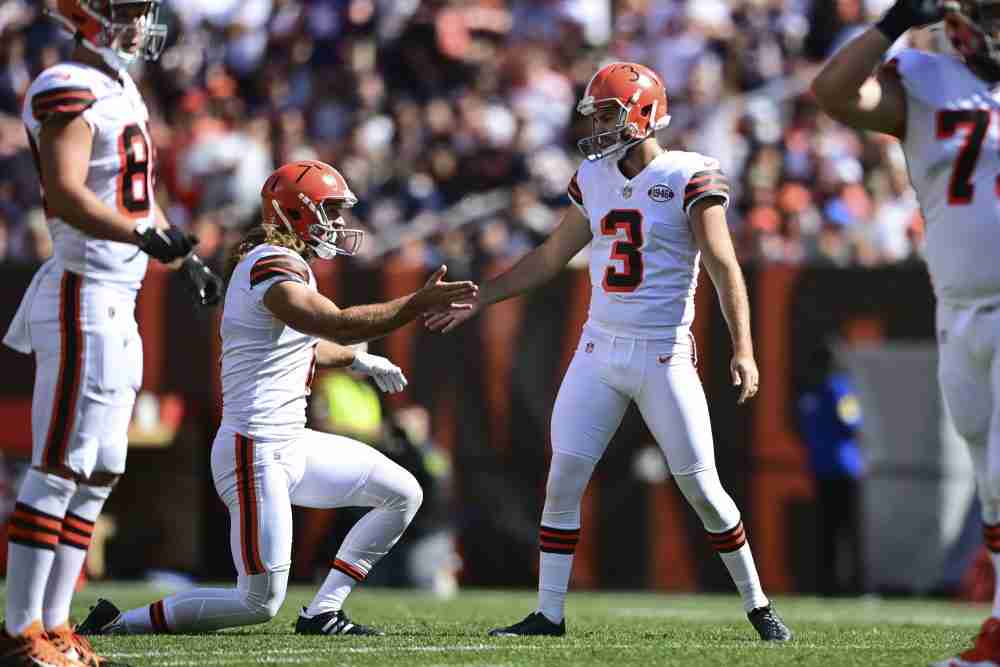 CLEVELAND — A month ago, kicker Chase McLaughlin was battling just to have a chance.

He got it and is making the most of it.


McLaughlin was locked in a preseason battle with incumbent Cody Parkey and solidified a spot on the roster after Parkey suffered an injured quadriceps. On Sunday against Chicago, he set a team record for FirstEnergy Stadium with a much-needed 57-yard field goal for the Browns’ first points, tying the game in the second quarter.

“It shows myself that I can do it. It’s something that you practice all the time and just pray for the opportunity to go out there and do it. To have it go exactly as planned is something great.”

McLaughlin said the kick on the career-long 57-yarder wasn’t his best, but it was plenty good enough to give the Browns points after their first two drives ended with fourth-down sacks of Baker Mayfield.

The third drive got off to a promising start, but a holding penalty on right tackle Jack Conklin pushed the Browns back to the 39. An incomplete pass left the Browns too far for a realistic fourth-down conversion and in an unfavorable position for a punt or field goal.

“Kevin Stefanski has the confidence to put me out there and just give me an opportunity I was super thankful for and I’m glad I could make it for the team,” McLaughlin said.

The 57-yarder was third-longest in franchise history and the longest since Steve Cox was good from 60 yards in 1984. Phil Dawson three times is the only other Browns kicker to make two from 50 yards in a game.

“That is a great bailout when you are playing a team that is obviously very stiff on the defensive side of the ball,” Mayfield said. “Being able to get three points on some of these drives is important. For him to kick like that, that is pretty special.”

Rookie linebacker Jeremiah Owusu-Koramoah got the most playing time of his three-game career and made his presence felt throughout the day.

Getting the start, Owusu-Koramoah was second on the team with four tackles — three solo and one for a loss — and assisted on one of Myles Garrett’s 4.5 sacks. He made a critical play on third-and-2 in the first quarter, stuffing running back David Montgomery for no gain to force a 47-yard field goal.

“It’s always a good feeling to be able to execute on certain plays,” Owusu-Koramoah said. “I felt like we came into the game, prepared the right way all throughout the week and when your opportunity comes you have to face it and execute.”

Rookie cornerback Greg Newsome II, the No. 26 pick, left the game with a calf injury announced in the fourth quarter. Stefanski said he’d have an MRI on Monday morning.

** Left tackle Jedrick Wills Jr. got the start but was in and out of the lineup after aggravating an ankle injury suffered in the opener. Blake Hance replaced him at times, but Wills returned.

** Mayfield was sacked five times, but Stefanski said there were “no issues” with the left shoulder that popped out and in last week against the Texans.

Mayfield gave Team USA a shout-out after its Ryder Cup win, placing a hat on the podium for his interview.

** Bears Pro Bowl pass rusher Khalil Mack sprained a foot but returned in the second half. He had two sacks.

On the first, the snap from JC Tretter seemed to hang in the air and Wills didn’t react, dooming Mayfield. On the second, there appeared to be confusion and Mayfield was sacked by Mack.

“I will get to the bottom of that because you can’t play like that in your own building when crowd noise is not an issue.”

As expected, Tretter (knee) was in the starting lineup after not practicing Wednesday and Thursday and being listed as questionable. That’s become his routine.

The Browns’ inactives contained no surprises.

** The Browns elevated tight end Jordan Franks from the practice squad Saturday and he played on special teams.

The 2020 and 2021 Legends classes were inducted at halftime. D’Qwell Jackson and Bill Nelsen were honored as members of the 2021 class, and Josh Cribbs and Webster Slaughter from the 2020 class.

Cribbs told the crowd it was his great honor to play, bleed and win for the fans.

** Rookie Demetric Felton had two catches for 13 yards and seven punt returns for 103 yards, including a long of 24.

** In honor of the throwback uniforms, the team used old-school graphics on the scoreboard.

Notes: Myles Garrett frustrated by chips from Texans … and teammates not taking advantage of the resulting 1-on-1s
Notes: No update on Greg Newsome II’s calf injury, but Greedy Williams ready if needed