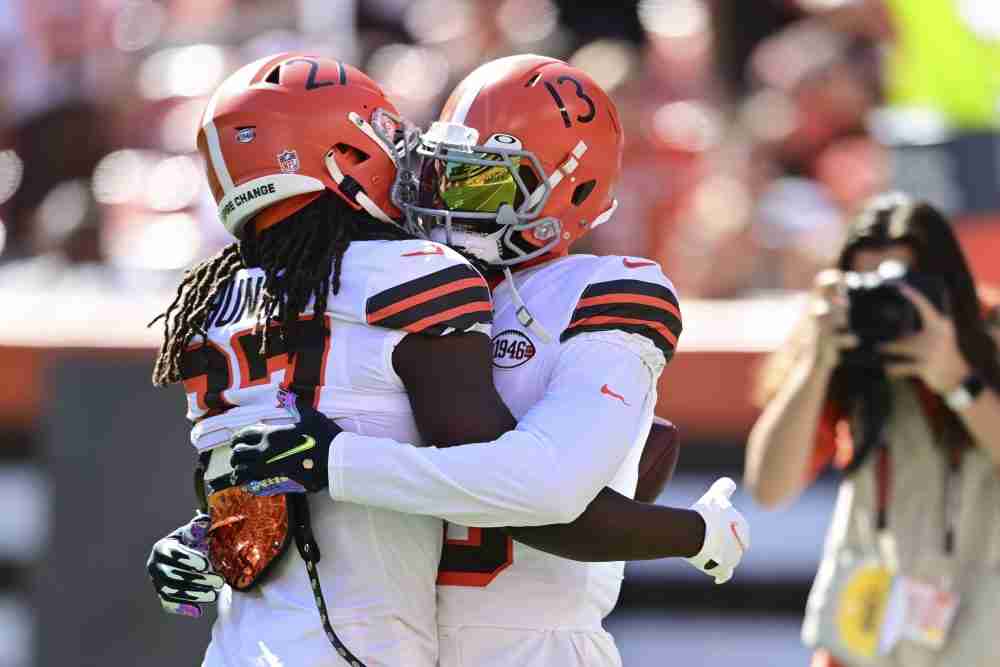 CLEVELAND — Odell Beckham Jr. was overwhelmed to be back on the field at FirstEnergy Stadium. He celebrated the improved chemistry with quarterback Baker Mayfield that resulted in five catches for a team-high 77 yards. He appreciated the loud ovations from the home crowd.

The superstar receiver couldn’t wait to get home.

“Exhausted,” Beckham said, adding it was the most tired he’s been after a game. “I lost my voice and I wasn’t even screaming, so I don’t know what happened. I’m exhausted. It’s time to go home.”

Beckham didn’t disappoint Sunday in the 26-6 win over the Chicago Bears.

In his first game since his anterior cruciate ligament tore Oct. 25 and he had surgery to repair it Nov. 10, Beckham unofficially played 51 snaps, had a long catch of 26 yards and added a 10-yard run. He made a spectacular grab down the left sideline but Mayfield’s throw was too far out of bounds.

“He’s back like he never left,” running back Kareem Hunt said. “I told him he looked great out there and I’m looking forward to seeing many more.”

“He’s more tired than me,” said defensive end Myles Garrett, who had a team-record 4.5 sacks of rookie Justin Fields. “He looked good. You saw him, those hands are immaculate and the guy’s a helluva route-runner, so just love being able to watch him.”

Beckham, 28, was on the field early Sunday, jogging and stretching to prepare for his debut. He wore a Jarvis “Juice” Landry T-shirt to honor his best friend and fellow receiver who was placed on injured reserve Tuesday with a sprained medial collateral ligament.

“It means everything to get the win,” Beckham said. “I had the shirt before any incident went down, I was going to wear it regardless, but it just seemed fitting.”

#Browns OBJ on getting win for Jarvis Landry and wearing Juice shirt before game pic.twitter.com/jDi4v5yYhi

The emotion was only beginning. His brother flew in for the game, and Beckham jumped over the wall to give him a hug in the first row during warm-ups.

“Definitely a lot of love and support and it means the world,” he said. “The first time in a very long time, a lot of emotions, a lot of things running through you as you’re back out in the stadium. It’s still the dream to be in the NFL and play in this game, so it was a lot to take in today.

“It just felt like I could never get my legs going. It’s just exhausting. But we came out with a ‘W’ and that’s all that matters.”

Beckham said numerous times he couldn’t get his legs under him, comparing it to a boxer without his bounce. He also said the first hit, from linebacker Roquan Smith on an incompletion over the middle, popped out his shoulder.

“Football stuff. Shoulder pop out, put it back in, keep playing,” Beckham said.

He played the first four snaps and all but one on the opening drive and didn’t leave the field much when the outcome was still in doubt. He wasn’t on a predetermined snap count, but coach Kevin Stefanski kept tabs on him to make sure he was holding up.

“I’m one of those people that I will go as much as I can go,” Beckham said. “It’s hard for me to sit out. But anytime I needed a break I wasn’t hesitant to take it. I pushed it but I gave everything I could for today.”

Stefanski was appreciative of the effort.

“He worked very hard to get back here,” he said. “Any guy who is coming off an injury and coming off of an offseason surgery, it is not easy. He pushed very hard and I was proud of him out there.

“He made a couple of nice plays for us. I know he was productive in the pass game. I think it was good for him to get out there and help his team win.”

Beckham’s return came two weeks later than many expected but softened the blow of the Landry injury last week that will sideline him for at least two more games. Landry watched from the sideline with his left leg in a compression sleeve.

“Obviously losing a guy like Jarvis, one of our key skill players, you have to have people step up, so it was a blessing to have the late registration of Odell,” Mayfield said.

Much has been made of the struggles of Mayfield and Beckham to connect in their first two seasons together. They worked to develop the on- and off-field relationship in the offseason and throughout training camp, and Beckham felt the connection Sunday on the lakefront.

“Absolutely. Just the scheme that we have, we hit a couple throws, things I could definitely work on,” he said. “Glad to get that one out of the way.

“The goal is to keep improving, find ways to where I can help this offense improve week by week, and that’s just always going to be the goal.”

David Njoku focusing on “right things,” dealing with life’s distractions, motivated to stay
Kareem Hunt gets that look in eye and won’t be denied