Jadeveon Clowney shows up in big way, OBJ fits right in and other takeaways from an impressive win 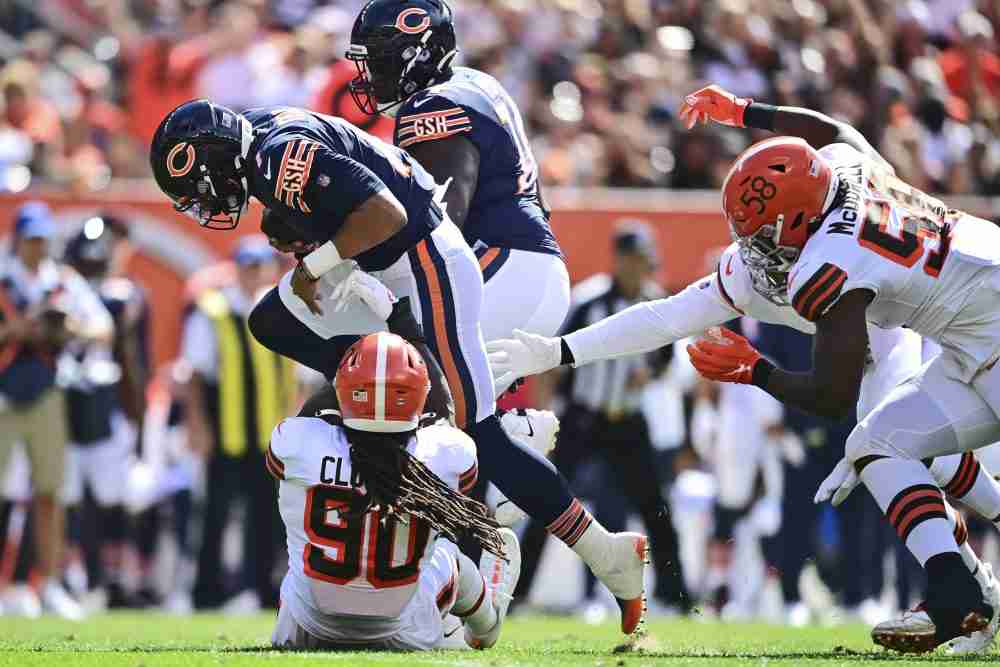 The Browns defense allowed 1 net yard passing and 47 total net yards Sunday in the 26-6 win over the Bears at FirstEnergy Stadium.

The numbers set franchise records, and coach Kevin Stefanski couldn’t remember being part of such an overwhelming effort.

“They were dominant from the jump,” he said Monday on a Zoom call. “It was a tight ballgame into the fourth quarter, and our defense kept us in it.

“Can you repeat that every single week? I hope so. I think the big takeaway for me is they practiced like that last week.”


Nickelback Troy Hill was amazed by what he and his teammates accomplished.

“I ain’t never been a part of that in my whole life,” he said of the 1 net passing yard. “That has to be history, if you ask me.”

Here are five takeaways from a decisive win:

Defensive end Jadeveon Clowney was overshadowed by Myles Garrett and his franchise-record 4.5 sacks but he had a big day, too.

Clowney had two sacks of rookie Justin Fields and five quarterback hits. The sacks were his first since 2019, when he had three in 13 games for the Seahawks. He was blanked last year in eight games with the Titans.

“JD was great yesterday, and really he was locked in at practice last week,” Stefanski said. “He had a great week of practice. He works really hard. He fits what we want to do. His teammates are pulling for him. He’s a great teammate.”

** Clowney made an inside move from his spot at left end.

** On the next snap, Garrett beat Peters and a weak chip from running back Damien Williams.

** Garrett lined up inside Clowney on the left side and had a good rush vs. right guard James Daniels. Fields tried to step up but was met by defensive tackle Malik Jackson, who missed the sack. Garrett finished the job.

** End Takkarist McKinley rushed from left end and split the sack with Jackson. Garrett crashed inside from the left interior.

** Garrett lined up over right guard, pushed through and chased down Fields, making a shoestring tackle.

** Safety Ronnie Harrison Jr. was in Fields’ face as he rolled and Fields fell.

** Garrett beat Peters around the edge. A blitz was called, but Garrett didn’t need the help.

** Garrett ran around Peters again, didn’t wrap up Fields and Clowney took him down.

He caught five passes for a team-high 77 yards, rushed once for 10 yards and drew two defensive holding penalties while playing 52 of 81 snaps. He will only get better as his body adjusts to game action.

“He was productive in those 52 snaps,” Stefanski said. “Any first time back, it is always going to be working through it, getting your wind and that type of thing, but I thought he did a nice job.”

The Bears were worried about Beckham, just like every team will be. That benefits the entire offense.

Quarterback Baker Mayfield connected with Beckham on a hook, a slant, a stop on the right sideline, an in route and a comeback in which he threatened to go deep. There’s nothing wrong with Mayfield looking for his top threat — within reason — and Mayfield has matured to the point that “forcing” the ball to Beckham won’t be a problem.

Rookie Demetric Felton has been a pleasant surprise during the Browns’ 2-1 start, including a 33-yard touchdown vs. the Texans, but running back Kareem Hunt shouldn’t lose any snaps to him.

Felton was the back on two third downs in the first quarter, a role normally reserved for Hunt. Both plays were designed to go to Felton, with Mayfield overthrowing him on a wheel route that should’ve been a touchdown and a swing pass going for no gain on third-and-1.

Mayfield’s miss isn’t Stefanski’s fault and maybe Felton caught the Bears off-guard, but taking Hunt off the field for him is a bad idea.

Mayfield said after the game Hunt ran even angrier than usual, and he finished with 155 total yards and a touchdown. Stefanski was asked Monday if that might’ve been because of Felton taking his spot early.

“I don’t think so but I like an angry Kareem Hunt so I will make a mental note of that,” Stefanski said. “There are some plays that we will have for Demetric each game and his role will grow as he earns his role. I would not read into it more than that.”

Owusu-Koramoah played his highest percentage of snaps (23 of 45, 51 percent) and there was a lot to like.

He showed speed and instincts while making plays in coverage, against the run and as a blitzer. He had four tackles, a half-sack and two passes defensed.

“I thought he played fast,” Stefanski said. “I really thought his ball disruption was really good.”

“He’s a ball magnet — always around the ball like that,” Hill said. “He’s going to be a special one.”

Kicker Chase McLaughlin’s perfect performance earned him trust with the coaching staff and time with the organization. Neither is in infinite supply, but he quieted the doubts that were natural given his lack of a track record — 33 career field goal attempts.

He went 4-for-4 on field goals and made both extra points. He showed off his strong right leg with 57- and 52-yarders.

“I have had a ton of confidence in him,” Stefanski said. “That is because I see him do it at practice. He has been very consistent. That is what we are going to need from him moving forward.”

Browns fans always need something to worry about, but it shouldn’t be kicker until McLaughlin provides a reason. He hasn’t missed a kick in 14 tries this year.