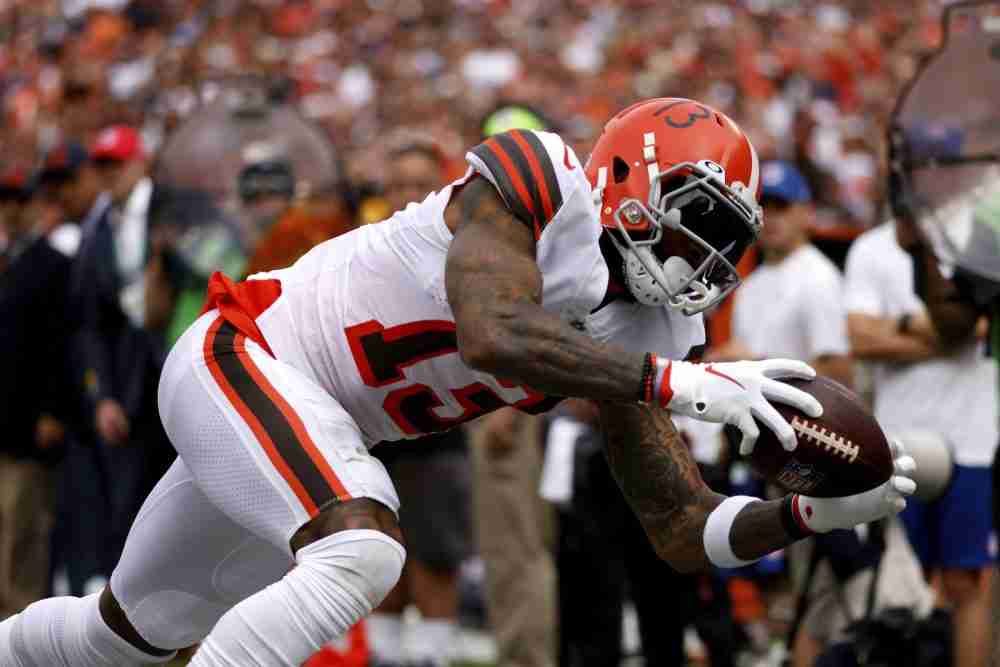 Vikings receiver Justin Jefferson was one of the LSU players Beckham handed cash to after the national championship win in January 2000. The generosity earned Beckham a two-year ban from the school’s facilities.

“I talked to him yesterday and I told him we’re coming for that $400 to $600 that he might owe me plus interest from the championship game,” Beckham joked Thursday. “So it’s the only reason I’m making the trip is just to get this $400 to $600 from him.”

Beckham was clearly kidding. He’s extremely close with Jefferson after playing with his older brother at LSU and excited to see him Sunday when the Browns play the Vikings.

“He’s really more like my little brother than a friend. I love him to death,” Beckham said. “He’s definitely just a special player, just to watch him and how much he has evolved and what he’s done and what’s doing in the league and what he’s going to continue to do, love to see it.”

He trails only Beckham (1,959) for most yards through 20 games in NFL history and tied him in second place with seven 100-yard games as a rookie.

Beckham is glad to see Jefferson challenging the records.

“Absolutely. I think anybody who sets records knows they’re meant to be broken and you would want to inspire someone to go out and do it, so I would love it,” Beckham said. “I love the pace that’s he on. I wish him the longest, healthiest career that he could possibly have.”

Beckham returned Sunday in the 26-6 win over the Bears, playing his first game since an anterior cruciate ligament tore Oct. 25. He played 52 snaps, catching five passes for a team-high 77 yards.

He said the exhaustion he talked about after the game was more emotional than physical.

“I’ve been training hard and I’m in great shape,” he said.

#Browns Odell Beckham Jr. on the emotional exhaustion he felt after his return. pic.twitter.com/Iddh88JMkK

Beckham said his shoulder quickly popped out after a hit by linebacker Roquan Smith on the second play and went back in. He was listed as a limited participant on the injury report Wednesday but said that was inaccurate.

“I remember taking all the reps,” he said and was listed as a full participant Thursday.

Coordinator Alex Van Pelt was delighted Beckham was able to play as much as he did and come out feeling good.

“Yeah, it was a lot of plays for O and he did feel it after the game, but I think as the season goes on, he will be in better football shape, his legs will come back quicker and he will be able to play longer for us,” he said.

Van Pelt wasn’t sure how defenses would treat Beckham after missing most of last season. The Bears prioritized stopping him.

“Obviously he demands respect out there with the coverage element,” Van Pelt said. “They did have a safety over the top of him a lot of the day, whether he was on the weak side by himself or the strong side of the field of receivers.

“He drew coverage his way, which helps us in a lot of different ways in the run game and in the pass game, as well. He definitely had an impact out there, and we expect that to continue.”

A 26-yard gain down the sideline was the longest completion between Baker Mayfield and Beckham. They were looking for deeper shots but showed discretion.

“There was some growth in that area for sure,” Van Pelt said.

“We will have opportunities throughout the year and I’m sure that we will hit them,” Beckham said. “When the opportunity presents itself just make the most of it.”

Defensive end Jadeveon Clowney (neck) was added to the injury report but was a full participant.

** Linebacker Sione Takitaki (hamstring) was limited for the second straight day, and coordinator Joe Woods said he hopes to have him back this week after not playing vs. the Bears.

Running back Dalvin Cook (ankle) was limited for the second straight day.

THAT’S WHAT FRIENDS ARE FOR

Beckham has no doubt best friend and receiver Jarvis Landry would be fighting to play if the Browns hadn’t put him on injured reserve last week, which requires a minimum three-game stay. Landry suffered a sprained medial collateral ligament on the second play Sept. 19 against the Texans.

“I don’t find it easy for him to miss any time,” Beckham said. “He would definitely be trying to be out there.”

Beckham lives close to Landry and said he visits him every day.

Landry has remained available to Beckham and the rest of the Browns.

Chase McLaughlin won over a bunch of fans with his perfect performance against the Bears — four field goals, including 57- and 52-yarders, and two extra points.

“He responded extremely well,” special teams coordinator Mike Priefer said. “He does not bat an eye. He is a very mentally tough young man.

“He is a much stronger and a better kicker than he was when he came out of Illinois. His confidence will continue to grow, but he knows every kick is extremely important. He has to have the same focus and intensity that he approached the other kicks with on Sunday.”

Woods was asked what the defense can do for an encore after holding the Bears to 1 net passing yard and 47 net total yards — both franchise records.

** The old Metrodome was loud, but coach Kevin Stefanski and Priefer said U.S. Bank Stadium is louder. The Browns continue to practice with crowd noise played over the speakers.

** Cornerback Bryan Mills (6-foot-1, 184 pounds) was signed to the practice squad. He’s an undrafted rookie out of North Carolina Central.

The spot was open because Tim Harris was placed on the practice squad COVID-19 reserve list Wednesday.