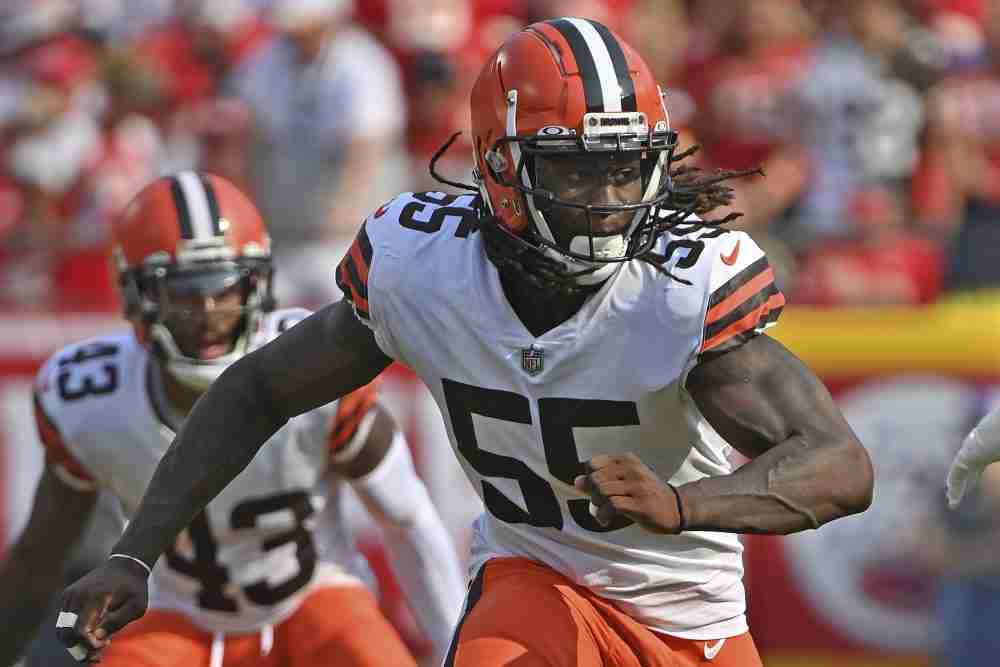 BEREA — The cheers from Myles Garrett, Jadeveon Clowney, Malik Jackson and the rest of the defensive line weren’t inspired by a three-sack game or a great practice.

“When I first walked back into the D-line room, the whole D-line started clapping for me,” he said Thursday. “That was a cool moment because it shows it’s a brotherhood.”

McKinley, a 6-2, 260-pound end, left the Browns for three weeks during the grind of training camp for personal reasons. He kept in touch with teammates, coach Kevin Stefanski and general manager Andrew Berry and still felt like part of the team, but the reception upon his return caught him by surprise.

“They were excited to have me back, so that made me feel real good,” he said. “I had to hold my tears back, but it was an awesome moment.”

McKinley, 25, left after less than a week of camp and came back during the final week of the preseason. He didn’t want to talk about the reason for the departure but is grateful for the way the Browns handled the situation.

“Great organization, love Mr. Berry, love Coach Ski, love the Cleveland Browns organization,” he said. “Just the support means everything. The NFL really is not like that, so to have the support from the owner, the GM, the head coach, my teammates, it was just great. Glad to be a Brown and continue to focus and get ready for Minnesota.”

Coordinator Joe Woods wasn’t surprised by how McKinley was treated. He said the organization, starting with owners Dee and Jimmy Haslam, has established a “family-first atmosphere.”

“He’s one of our brothers and the D-line room, they’re very close,” Woods said. “He may have been going through some struggles and those guys are always there to support him.”

McKinley agreed to a one-year, $4.25 million deal on the second day of free agency in March. The signing ended a long pursuit by Berry, who liked McKinley coming out of UCLA in 2017 — the Browns took Garrett No. 1, and McKinley went No. 26 to the Falcons — and tried unsuccessfully to claim him off waivers last season.

“Ultimately I ended up where I was supposed to be,” he said, adding his first predraft visit was to Browns headquarters.

That seems true on and off the field.

“These young men, we’ve said it before, it’s kind of cliche, all they care about is how much you care about them,” special teams coordinator Mike Priefer said. “I think Takk’s one of those guys that needed that from an organization and I’m sure he’s very, very happy he’s here because from the top down we do care about our players as people first.”

McKinley is the third end behind Garrett and Clowney and has played 43 percent of the snaps in the Browns’ 2-1 start. McKinley picked up his first half-sack last week as the defense totaled nine in the 26-6 win over the Bears. He has eight tackles and two quarterback hits.

“I’m just trying to keep the pressure, keep the sacks going when they’re off the field,” he said of Garrett and Clowney, although he sometimes joins them in pass rush situations. “Whenever I get my opportunities, I’ve got to make them count.”

Woods likes what he’s seen, which includes speed off the edge and a lot of energy.

“Right now, he’s doing a good job and he’s getting comfortable and he’s playing well for us and we’re going to continue to do more things to create some one-on-ones and use him in coverage, as well,” Woods said.

McKinley played only four games last year as he dealt with a groin injury and tweeted himself out of Atlanta. He’s gained an appreciation for playing the game.

“Just the opportunity to be in the NFL, my last four years I may have taken it for granted,” he said. “This league is not promised, so being able to go out there on this practice field and meetings and getting 1 percent better every day and being able to compete is the best thing ever. I’m very appreciative. Very.”

McKinley had six sacks as a rookie — plus two in the playoffs — and seven in Year 2 but just 6.5 in his last 30 games. He said he had a lot of rust to knock off after last season but believes he can still have the career he envisioned.

“Yeah, but it starts with hard work,” he said. “You’ve got to put the work in, you can’t just say it, you’ve got to go out there on the field and actually want to work.

“Now that I’m in Cleveland, I don’t have no distractions, it’s just me, myself and I and work. Find ways to help this team win games.”

The road to Cleveland was long, winding and bumpy, but McKinley has embraced the difficulties.

“Life is like a roller coaster, there’s going to be ups and downs and my life has always been like that,” he said. “Nothing ever comes easy for me, and I’ll be OK with that.