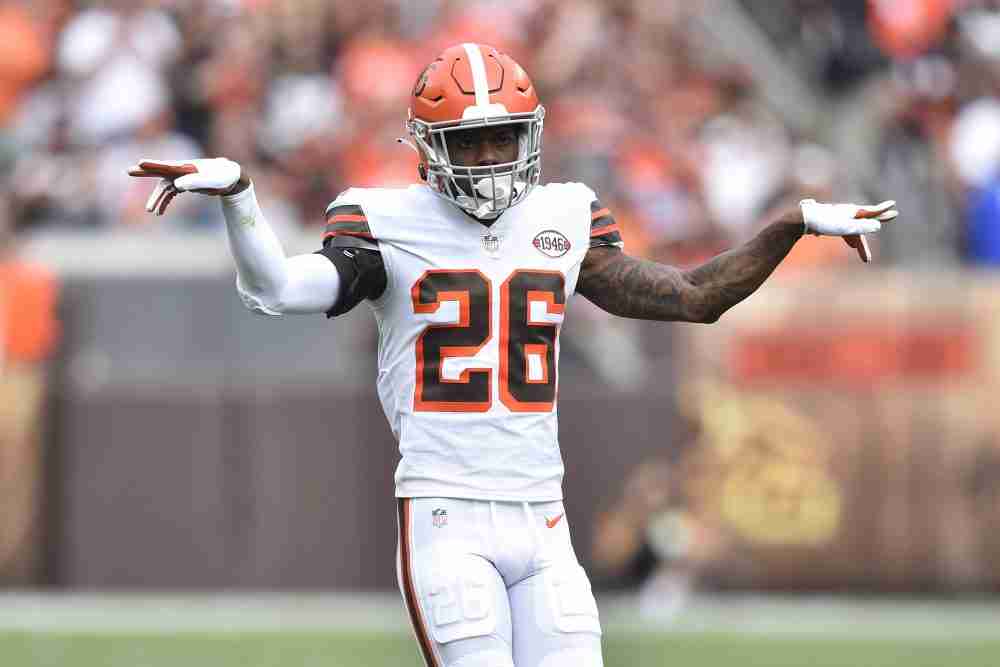 He didn’t lose his competitive spirit.

“He came into the year with a positive attitude,” special teams coordinator Mike Priefer said Thursday. “He knew that we drafted a young man who could beat him out. He competed against him, got hurt and then once he became healthy again, he looked at me and said, ‘Coach, whatever you need me to do, I will do.’

“Because he is so athletic and because he is a second-round draft pick and he is a great athlete, he has put himself in a position to help us win on special teams last week and this week on defense.”


Williams was one of four defensive backs — Troy Hill, Grant Delpit and A.J. Green — who earned game balls after the 26-6 win over the Bears for their work as the
“vise guys” on punt returns. Williams, who missed all of last season with nerve damage in his shoulder, will have a much larger role Sunday when the Browns play at Minnesota.

Newsome is out with a calf injury suffered against the Bears, so Williams will move into the starting lineup opposite Denzel Ward. They’ll be charged with slowing down Vikings quarterback Kirk Cousins and receivers Justin Jefferson and Adam Thielen.

“Just playing with no worries,” Williams said. “Whatever the situation is, that’s what it is. Me just coming in and doing what I’m supposed to do, which is my role and play at the highest level.”

In addition to his time on special teams, Williams played eight snaps on defense in the opening loss at Kansas City and eight against the Bears after Newsome exited. He has two tackles and a pass defensed.

“I felt great. Did not really worry about the injury or any of that,” Williams said. “I feel like I am 100 percent ready to go.”

The shoulder injury happened on a seemingly innocuous play Aug. 24 in the 2020 training camp. He walked off the practice field, was initially listed as day to day, never returned to practice and was eventually shut down for the season when the shoulder muscles refused to fire.

He was cleared to return this year and opened camp with the first-team defense, although an underdog to keep the starting job over Newsome, the No. 26 pick. A groin injury — “I hate soft tissue injuries. They suck,” he said — essentially ended the competition, along with Newsome’s strong play, but Williams was healthy in time for the start of the season and prepared for when he’d be needed.

“That has always been the plan — stay ready,” he said. “This is a long season. Opportunity is going to pop up. It popped up early. So I just have to be ready to go.”

Williams was the No. 46 pick in 2019 and started 12 games as a rookie, missing four with a hamstring injury. He had 47 tackles, two for loss, and two passes defensed but is still looking for his first NFL interception.

The start against the Vikings is another milestone in his comeback from the lost season.

“I do not let emotions get the best of me,” he said. “I just take it day by day. As the time comes and the game approaches, that is when my mind is clicked in. I am already mentally prepared for anything.”

Williams downplayed the significance of the return to the starting lineup, but safety John Johnson III acknowledge its importance.

“Within himself, I know he’ll get ready to play this game, I know he’ll be even more fired up than he previously was,” he said. “I’m happy for him and I’m excited to see how he does.”

General manager Andrew Berry drafted Newsome and signed veteran nickelback Troy Hill in free agency because depth was a problem last year at the critical position. Having Williams available to step in is huge for coordinator Joe Woods.

“He is athletic. He has length. He is able to be aggressive for us in terms of playing man coverage,” Woods said.

Coach Kevin Stefanski said Newsome won’t go on injured reserve, so he’s expected to miss one or two games. He was listed third on ESPN’s ranking of NFL rookies through three games.

“Greg was doing a great job for us,” Woods said. “As a young guy coming in, very confident, very smart and picked up the system.

“Greedy is very capable. He will be able to step in. I think everything will move smoothly.”

Stefanski was offensive coordinator with the Vikings before joining the Browns, so both teams run similar systems. Williams said that will help the defense identify things faster, but he still must stick with Jefferson and Thielen. Jefferson has 1,654 receiving yards since he was drafted No. 22 last year, and Thielen has 18 touchdowns over the same span.

“Two great receivers, man,” Williams said. “And that just makes us want to go harder … hyping everybody up. But we just want to stay dialed in and complete the task.”

Williams played with Jefferson at LSU.

“JJ, that’s my boy,” he said. “I can just remember he came in as a walk-on and he just worked his tail off to make the team. And he did great things, which I expected him to do.”

Priefer may not have expected Williams to volunteer for a larger role on special teams, but it fits with his personality.

“Man, just loving the game of football,” Williams said. “No matter what, you just want to go out there and compete against anybody. So my opportunity came up and I just wanted to be happy playing football, which is something we love to do.”

Takk McKinley appreciates ovation from D-line, support of organization, says Cleveland is where he’s supposed to be
From low man in Minnesota to head coach in Cleveland, Kevin Stefanski earns trust and respect