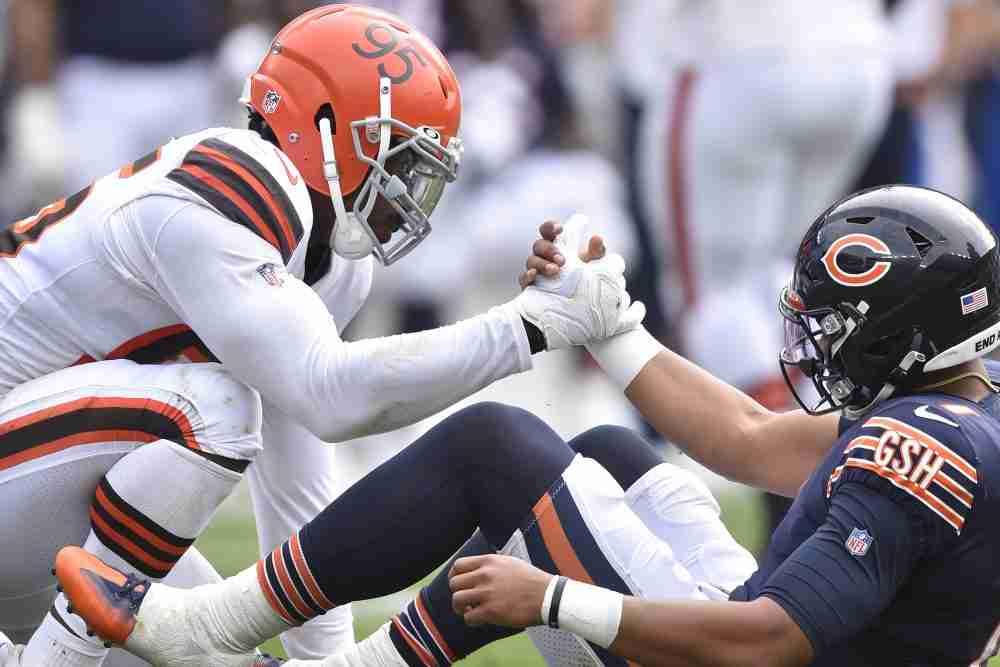 BEREA — The season was only two weeks old, but Myles Garrett didn’t like the way the defense was performing. And he wasn’t going to accept all the new players as an excuse.

“We needed more out of ourselves,” the All-Pro defensive end said Friday. “The first two games just weren’t cutting it. I knew we still had more to do.

“We have a long season. We have no time to be taking it slow. We’ve got to mesh right now, and no one’s going to wait for us.”

The Browns had just beat the Texans to improve to 1-1, but Garrett, one of only a few defensive holdovers from a year ago, agreed with the external criticism that the defense shouldn’t have allowed 33 points in a road loss to Kansas City or 21 points in a home win over the Texans.

Garrett and veteran linebacker Malcolm Smith called for a players-only defensive meeting after the Sept. 23 practice. The defense came out three days later and held the Bears to 1 net passing yard and 47 total net yards in a 26-6 win.

“I told the guys we need to get in, get our work in and get in here and get better,” said Garrett, who set a franchise record with 4.5 sacks of Justin Fields. “We get in for what 30 minutes after meetings, after workout, sit down and correct practice and go through calls as a defensive line, as a linebacker, DBs, everybody just working on their adjustments, so that you’re not surprised by anything when you get to the game.”

Coach Kevin Stefanski attributed much of the improvement vs. the Bears to a fantastic week of practice by the defense. Garrett called last Thursday “probably the best” of the year.

“I feel like guys really keyed in on their job, what they’re supposed to do and I want that out of us all year,” he said.

Stefanski said the trend continued this week, in particular Friday.

“Today I thought was really good,” he said.

Garrett shared the message he had for his linemates with the media last week, saying he was frustrated they hadn’t taken advantage of the Texans double-teaming him. His teammates seemed to accept the criticism, and end Jadeveon Clowney had two of the team’s nine sacks vs. the Bears.

“That’s exactly what I want out of my teammates, and I know they expect the same out of me,” Garrett said of challenging them. “I know I wasn’t doing enough after that second game and I think we all just wanted more out of ourselves, we knew we had more in the tank. Right now, we have to keep improving against every opposition we face.”

Sacks will be much harder to come by Sunday against Vikings veteran Kirk Cousins.

The Vikings have allowed a 22.1 percent pressure rate, according to Pro Football Focus, which is second to the Browns’ 22.0 percent. And Cousins has gotten rid of the ball in an average of 2.58 seconds, which ranks seventh in the league, according to Next Gen Stats.

“It’s switching up my rushes, and I know he’s not going to step back as far, so I have to either change things on my alignment or my rush path or I’m just trying to throw different angles at him, so he doesn’t expect me to come back a little bit quicker,” Garrett said.

He’ll also focus on thrusting his arms into the air. Cousins was tied for third in the NFL last year with 11 batted passes, according to Pro Football Reference, and had nine in 2019 and two in three games this year.

“We’ve been told and working on getting our hands up, jumping and batting down passes so we can get him on second-and-long, third-and-long,” said Garrett, who’s still looking for his first interception in his fifth season. “It’s never too greedy to think interception.”

Left tackle Jedrick Wills Jr. (ankle) and center JC Tretter (knee) returned to practice in limited roles and were listed as questionable on the official injury report. Tretter will play, and Wills is expected to despite aggravating the injury against the Bears.

“He did nice in his limited work, but it is something that we will monitor over the next 48 hours,” Stefanski said.

Linebacker Sione Takitaki (hamstring) was also listed as questionable. He didn’t play vs. the Bears.

** Sixth offensive lineman Chris Hubbard (triceps) was ruled out for a third straight game after returning to practice this week and being limited. Rookie cornerback Greg Newsome II (calf) was ruled out Wednesday.

** For the Vikings, Pro Bowl running back Dalvin Cook (ankle) was listed as questionable but told NFL Network he expects to play, barring a setback. He didn’t play last week.

Before the pair against the Bears, Clowney’s last sack was Nov. 11, 2019, with the Seahawks. He had gone 13 games without one.

“It was important for him,” Garrett said. “I know he was excited on the field and even when we went in the locker room. It was a big momentum shift for him because he knows he wants to get started on a good foot.

“Right now, he’s looking forward to keeping that thing rolling and carrying on.”

Clowney was credited with two quarterback hits vs. the Texans and five vs. the Bears.

“He has been applying pressure pretty consistently in these first three games,” Stefanski said. “He is a very long player. I thought he has done a nice job. He plays very hard.”

Rookie linebacker Jeremiah Owusu-Koramoah played a key role in the win over the Bears. He had four tackles, two passes defensed and a half-sack.

“What Jeremiah did well was staying in his process and starting the game and starting the plays correctly,” linebackers coach Jason Tarver said. “Just his patience at the beginning of the play and how he was able to fit and move, and he got more in the groove than he has before.

“That was really cool to see. When he stays in his process and when we all stay in our process, that is when we can be our best.”

Owusu-Koramoah played 23 of 45 snaps against the Bears for a season-high 51 percent.