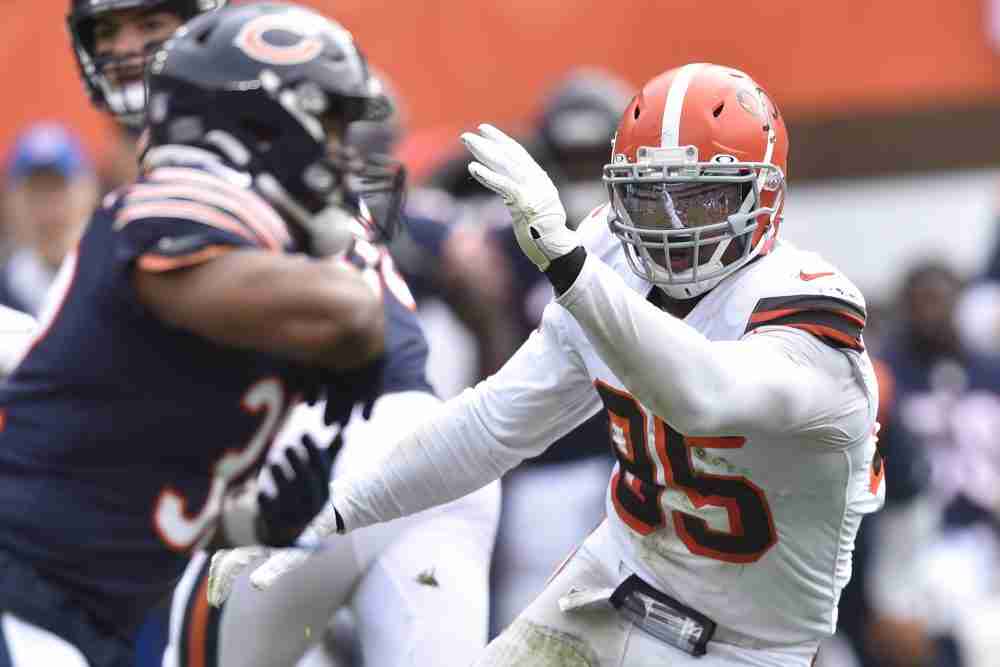 Yes, the opponent was the Bears. Yes, that meant embattled coach Matt Nagy, rookie quarterback Justin Fields in his first NFL start and an overmatched offensive line. But the historic performance by the Browns defense last week — 1 net passing yard, 47 net total yards — was undoubtedly a sign of growth and a preview of what it hopes to become.

“We showed Sunday that once we’re playing together we can be very special,” said defensive end Myles Garrett, who had a franchise-record 4.5 sacks.

Coordinator Joe Woods got at least some of the critics off his back, then said all he wants for an encore is a win. It won’t be easy against a loaded Vikings offense led by red-hot veteran quarterback Kirk Cousins. He’s thrown eight touchdowns and no interceptions — a streak of 200 attempts dating to last year that isn’t likely to end against a Cleveland defense that has one interception in three games.

“A great football player,” said coach Kevin Stefanski, who was with Cousins for two years in Minnesota. “Has played a lot of football. He has seen it all, so he processes really, really quickly. Accurate. A tough competitor. Very smart.”

Cousins benefits from one of the best receiving tandems in the league: veteran Adam Thielen and Justin Jefferson, who was a Pro Bowler as a rookie last year. Thielen has 18 receiving touchdowns since the start of 2020, one behind league leader Davante Adams of Green Bay. Jefferson has 1,654 yards on 108 catches for a 15.3 average and nine touchdowns in 19 career games. The Browns counter at cornerback with Denzel Ward and Greedy Williams, who’s replacing the injured Greg Newsome II, who was off to a strong start.

BATTLE OF THE BEST

Cleveland’s Nick Chubb and Minnesota’s Dalvin Cook rank with Tennessee’s Derrick Henry as the best pure runners in the league. Cook missed last week with an ankle injury and was listed as questionable on the injury report Friday, but the Vikings are optimistic he’ll play. If he does, fans of dynamic, game-breaking running backs will be in for a treat.

“He’s a very good running back,” Chubb said of Cook. “He can make guys miss. He’s fast, he’s versatile. He can do anything you ask him to do. A slippery guy but he also runs very hard. So, yeah, it’ll be a challenge for us to slow him down.”

The Vikings run a wide zone scheme similar to what the Browns use and proved last week it isn’t reliant on Cook. Backup Alexander Mattison rushed for 112 yards and added 59 receiving yards in the 30-17 win over the Seahawks. The Browns’ one-two punch is even better, which Kareem Hunt made sure everyone remembered with 155 yards from scrimmage last week. He’s more than the perfect complement to Chubb.

The connection between quarterback Baker Mayfield and receiver Odell Beckham Jr. was solid in Beckham’s return from a torn anterior cruciate ligament and will only grow stronger as the season continues. A big jump is possible this week, as Beckham should avoid the mental exhaustion and physical fatigue he felt last week. That improvement could include a deep strike that was missing vs. the Bears.

“There’s plays that are there and we will have opportunities throughout the year and I’m sure that we will hit them,” Beckham said. “When the opportunity presents itself just make the most of it.”

The Vikings defense is stout upfront and talented at linebacker, but the cornerbacks can be attacked. Bashaud Breeland has a dismal 29.6 coverage grade from Pro Football Focus through three games, and Patrick Peterson is at 57.5. Mayfield seeks his fourth straight game with a passer rating of at least 95, and the Vikings have allowed opposing quarterbacks to complete 75.8 percent for 959 yards, six touchdowns, two interceptions and a 119.6 passer rating. They do have 10 sacks and rank third on third down with 29 percent converted.

The Vikings could have Peterson, 31, follow Beckham wherever he goes.

“He’s part of the reason why Jarvis (Landry) and I went to LSU,” Beckham said. “He was like one of those people that inspired the culture there. So we’ve always looked up to him. This is always someone who I have a deep respect for and I’ve always loved his game. He’s a phenomenal corner. He’s been there 10-plus years. I still look at him as one of the best corners in the league.”

The experts would beg to disagree. Peterson, the No. 5 pick of the Cardinals in 2011, made eight straight Pro Bowls to start his career and was voted All-Pro three times, but has gone two years without recognition.

Kevin Stefanski’s record vs. the NFC.

First downs for the Browns and their opponents through three games.

Punt return yards for rookie Demetric Felton last week, 12 yards shy of the team’s total in 2020. His 129 yards for the season lead the NFL.

Similar teams with similar offensive schemes and plenty of talent. The familiarity of the coaching staffs is a wild card, but Kevin Stefanski gets the edge on Mike Zimmer, one of his former bosses in Minnesota. Browns 27, Vikings 24.