From low man in Minnesota to head coach in Cleveland, Kevin Stefanski earns trust and respect 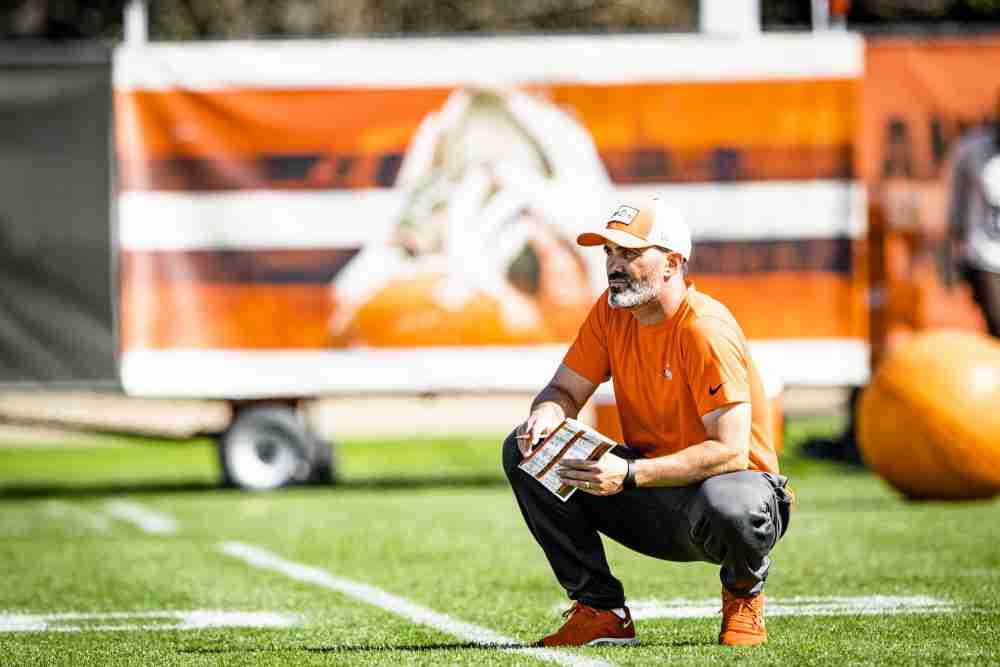 Kevin Stefanski was a grunt.

He was a training camp intern with the Eagles when Brad Childress met him in 2005. A year later Childress got the head coaching job with the Vikings and hired Stefanski as his assistant.

“He was literally filling coolers with Gatorade and going from dorm to dorm, doing that kind of stuff, just being around it,” Childress said of their introduction in a phone interview with The Chronicle-Telegram on Tuesday. “But I thought he was bright-eyed and intelligent. That’s what stuck with me.”

Fifteen years later, Childress got a call from old friend Bill Callahan that reinforced just how far Stefanski had come, and should fill Browns fans with confidence.

Callahan started his coaching career in 1980 alongside Childress at the University of Illinois, was a head coach in the Super Bowl and is considered one of the best offensive line coaches in the game. After Stefanski was hired by the Browns in January 2020, Childress connected the pair, and a few months later heard from Callahan.

“He said to me, ‘I don’t know that I’ve ever coached with a coach this young, in that position, that was able to articulate exactly what he wanted to do, his plan and then specifically what he wanted to do on offense and then exactly how they were going to do it,’” Childress said. “Starting out for Bill to say that after the places he’s been, the people he’s coached with and being a head coach himself, I thought that was high praise.”

Stefanski is always in the spotlight as the coach and play caller, but he’s storyline No. 1 this week as he returns to Minnesota for the game Sunday at 1 p.m.

Childress took him out of Philadelphia, where he grew up and went to the University of Pennsylvania, and planted him in the Twins Cities. Stefanski stayed for 14 years, working his way from assistant to the head coach — basically Childress’ right-hand man — to offensive coordinator before the Browns hired him as a 37-year-old.

With the humility to match.

“The intelligence level that he has, but still able to relate to all us lay people is a good quality for him to have,” backup quarterback Case Keenum told The Chronicle. “He’s just a normal guy with an Ivy league plaque hanging on his wall.”

Childress was initially impressed that Stefanski was a captain as a safety for Penn. His climb up the ladder was still slow.

He was Childress’ assistant for three years, putting the plays the coaches designed on cards and into the computer and keeping the operation running smoothly. He was promoted to assistant quarterbacks coach and remained in the job for five years, including Leslie Frazier’s three years as head coach.

When Mike Zimmer took over in 2014, Stefanski got his own room as tight ends coach, then moved to running backs and quarterbacks before the promotion to coordinator with three games left in 2018.

“He managed to stay through multiple head coaches,” Childress said. “You don’t just hang around an organization 14 years if you’re not really good.”

Besides the three head coaches, Stefanski worked under an array of coordinators, including Norv Turner. He was exposed to a wide variety of offensive systems and took something from each when he developed his with the Browns. The strongest influence was Gary Kubiak in his final year with the Vikings.

“That’s really a pot of knowledge,” Childress said. “He kept the good and threw out the bad. It’s like getting a doctorate degree.”

“That was probably the best thing for me, to learn under different systems helped me grow as a coach,” Stefanski said. “I think that is ultimately what all coaches do. We kind of sit back when we are the low man on the totem pole, be very quiet and take notes, and ultimately you try to be a sponge and learn as much as you can in those moments.”

Keenum had his best NFL season in 2017 in Stefanski’s first year as quarterbacks coach, leading the Vikings to the NFC championship game. The Vikings ran the West Coast system under coordinator Pat Shurmur, and Keenum said Cleveland’s offense has many differences and similarities.

“It’s a lot of different things, but it’s very much his own,” Keenum said. “I remember (back then) even him saying stuff that he was going to do when he was running it and he’s doing it. It’s cool to see.

Another Stefanski strength is how he relates to players. It’s particularly important with quarterbacks.

“He said what he was going to do and then he did it,” Keenum said of their introduction in 2017. “Trustworthy, cares about you as a person. Invited us into his home, met his wife and kids and had a great time there.”

Kirk Cousins followed Keenum as the starter with the Vikings the next year and watched Stefanski go from quarterbacks coach to coordinator after John DeFilippo was fired. Cousins posted a career-high 107.4 passer rating and threw a career-low six interceptions in 2019, Stefanski’s first full year in charge of the offense and as play caller.

Cousins met him at the Senior Bowl in 2012 when the Vikings coached Cousins and the North team.

“Kevin was younger at that time, but you could see that he was going places, he knew football, he was a good communicator,” Cousins told reporters in Minnesota this week. “That was a huge plus of coming to Minnesota, and then it was just natural fit to have him as the OC and the play caller in ’19, and then he earned the right to be a head coach and has proven that as well.”

Stefanski inherited Baker Mayfield upon his arrival in Northeast Ohio. He was coming off a Year 2 regression under one-and-done coach Freddie Kitchens and still dealing with maturity issues. As Stefanski set out to change the losing culture, he also dug in to fix his quarterback.

Childress sees Stefanski’s influence in how Mayfield plays, bringing a “steady hand” to how he’s coached.

“Well, I do, because I thought he was a wild horse rider,” he said. “Obviously he’s kind of smoothed him out a little bit, he’s not riding a roller coaster. You expect a certain standard of play from him now that you’ve seen him play in the last year and a half. You wouldn’t have said that after the first two years.”

The midseason bye last year was a turning point, as coach and quarterback figured out how Mayfield worked best in the system and tailored the game plans accordingly. In 11 regular-season games since, he’s completed 66.2 percent for 2,829 yards, 13 touchdowns, three interceptions and a 100.6 rating. In two playoff games, he completed 62 percent for 467 yards, four touchdowns, an interception and a 94.0 rating.

Mayfield was asked how Stefanski’s been most impactful.

“That’s a tough question. I would say between the consistency and his even-keeled nature, and just kind of holding everybody accountable, that standard that we’re trying to set,” he said. “We talk about building a winning culture and making that the new standard, he does a good job, a great job of keeping that the main thing and the most important thing every day.”

The grunt has come a long way.

Greedy Williams stayed positive after losing starting job, is ready for return to starting lineup
Joel Bitonio playing better than ever as he prepares for 100th regular-season start, turning 30