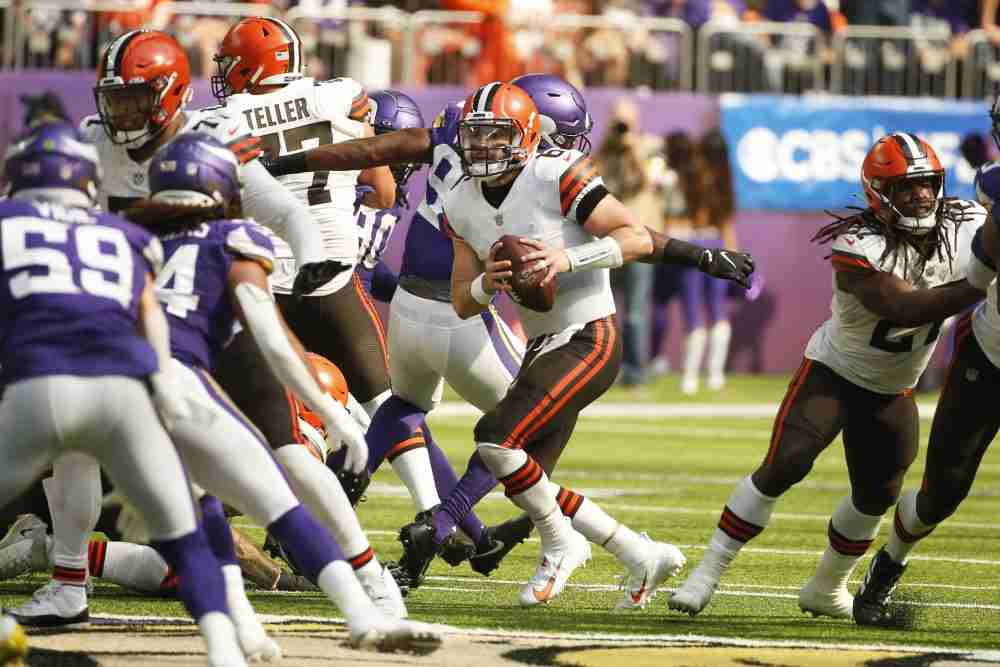 See, the way it works in the NFL, if you’re on the road and you only score one touchdown, the chances of you winning the game are almost nil.

Another way of virtually ensuring that you are not going to win a game on the road in the NFL is if your quarterback plays the way the visiting team’s quarterback played in Minnesota on Sunday.

“Today,” said the guilty party during his postgame self-critique, “I don’t know what the hell that was.”

The Browns won it, of course, thanks to their defense, which ran roughshod to the rescue of a sputtering offense with a quarterback who seemed over-amped all day, firing high-velocity overthrows all over the playground.

Mayfield played lights on. Just two weeks ago he led the NFL with a completion percentage of 81 percent. Sunday he was 15-for-33, and even that reads a lot better than it looked.

Late in the game, he completely missed a wide-open Odell Beckham Jr. with what should have been the touchdown that iced the game. But the unforced incompletion consigned Dawg Pound puppies to a few more minutes of breath-into-the-paper-bag moments.

Mayfield had other misfires throughout the game that could have extended, not ended, drives. It seemed to be a chemistry-deficient day between him and his receivers, who repeatedly separated from defenders, only to see a Mayfield missile whistle down the wrong exit ramp.

“He struggled. … I struggled would be the answer,” said the coolly confident Stefanski, quick, as always, to point the finger at himself, deflecting it from his players, a subtle bit of nuance common among great leaders. “I’ve got to do a better job of (calling plays) and getting guys open.”

Fortunately for Mayfield and Stefanski, the Browns’ suddenly ravenous defense was the great eraser for all the offensive misfires. When big plays needed to be made — and the call went out for many of them in this old-school, smashmouth street fight — it was the defense that made them.

In a twisted, but also welcome sort of way, the fact the Browns won a game on the road with a quarterback leaking oil, is — at least for a day, you wouldn’t want to make this a habit — actually an encouraging turn of events.

Bad quarterbacking is almost a guaranteed loss, no matter where the game is played, or who the opponent is. In this case, the game was played in hostile territory, against a formidable opponent, before rabid fans wearing huge Viking headgear, with large, menacing-looking horns sticking out of them.

But the Browns defense, completing a second consecutive domination of an opposing offense, the likes of which hasn’t been seen since before Mayfield’s parents met, adds to the excitement over what’s possible in this Browns season.

The most telling moment may have been late in the game on the Vikings’ final, failed, drive. Stefanski called a timeout, not to discuss or adjust strategy, but simply to give his defense a chance to catch its breath.

Without getting too dramatic, Browns 14, Vikings 7 may, in hindsight, as the season progresses, be identified as a seminal, coming-of-age moment for this Browns team.

Mayfield is going to have a clunker every once in awhile. Most players, including quarterbacks, do. However, to have a team good enough to still win, on the road, when that happens — that changes everything.

And that’s what happened Sunday in Minnesota.

All of a sudden, the Browns defense appears to be as good as the Browns offense.

That’s a comforting thought for the Browns, and a disconcerting one for their opponents.

Winning on days your quarterback is having a bad day is like winning when your starting pitcher gets knocked out of the game in the second inning.

A team is not supposed to win on days like that. When it does, it gets everyone’s attention, including the players on the team in question.

“It’s a great win for us, but we’ve got to get better. I’ve got to get better,” said just-one-of-the-guys Stefanski. “You’re going to have to win a bunch of different ways. Today our defense carried us. In this league you have to go on the road and beat a good team.”

When you go on the road and beat a good team, but score only one touchdown, with your quarterback struggling, it feels like you stole a game.

“The defense bailed us out,” Mayfield said after his worst game of the season. “I’ve got to pick it up. I’ve got to be better, flat-out simple.”

Mayfield will be better, because historically he’s better far more often than he’s bad, and he knows that sometimes you’ve got to steal a win.

Defense proves it’s “real and ready,” and other takeaways from a 14-7 win over Vikings
Analysis: Kevin Stefanski’s even-keel approach the right one after Baker Mayfield’s dismal day vs. Vikings