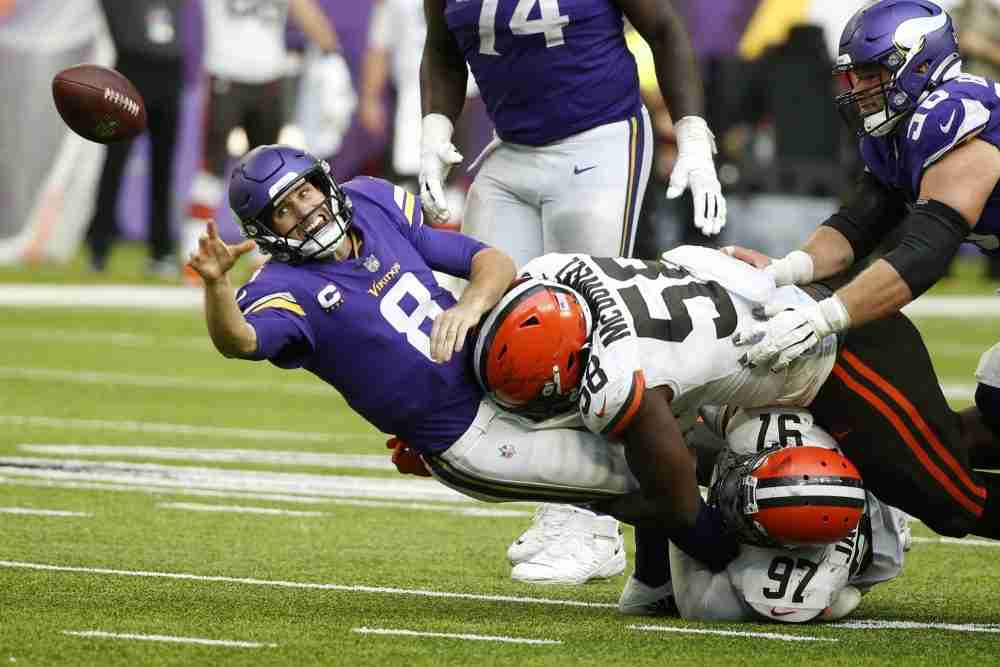 The Browns defense stepped up in weight class Sunday in Minnesota.

It delivered another knockout performance.

The Browns wouldn’t be celebrating a third straight win, 14-7 over the Vikings, without the continued dominance of the defense. For anyone skeptical about the historic outing last week against the Bears, it wasn’t a fluke.

As impressive as nine sacks, 1 net yard passing and 47 total net yards were, the Bears had a rookie quarterback making his first start (Justin Fields) and a coach who didn’t give him much help (Matt Nagy). The Vikings were a completely different challenge.


Kirk Cousins was playing as well as any quarterback in the league with eight touchdowns and zero interceptions. They have quality receivers and a top-five running back in Dalvin Cook. They entered averaging 29 points a game.

Then coordinator Joe Woods countered, which should shut up the critics who were way too loud after the first two games. The Browns didn’t allow another point and have held back-to-back opponents to single digits for the first time since 1995. They limited the Vikings to 255 total net yards and 5-for-16 on third down. Cook rushed nine times for 34 yards.

A plethora of people deserve praise.

The Browns had only two sacks but hit Cousins all day. While Woods made some well-timed blitz calls, much of the pressure came from the front four. When that happens, life gets a lot easier for a coordinator.

Cornerback Denzel Ward should’ve quieted many of the questions about his play early this year. He gave the ball back to the offense with good coverage on third and fourth down in the second quarter and had a key breakup on a deep pass to receiver Justin Jefferson on the final drive.

Nickelback Troy Hill challenged receivers all over the field and provided support against the run. Safety Grant Delpit took over for starter Ronnie Harrison Jr. (concussion) on the first drive, and M.J. Stewart Jr. moved into Delpit’s spot in the dime defense.

Rookie linebacker Jeremiah Owusu-Koramoah continued to make plays and earn more playing time. He started in the base defense and also played in the nickel.

I didn’t forget Williams. More on him later.

NOT GOING TO CUT IT

The consternation among fans felt crushing.

Imagine if the Browns hadn’t won.

Quarterback Baker Mayfield will be the hottest topic of conversation throughout the week after a dismal day. He didn’t see open receivers, missed them when he did and was too often unable to escape trouble or make a quality throw when the pocket was compromised.

He readily admitted the defense “saved him,” calling his play “piss-poor.” After leading the NFL through two games with an 81.6 completion percentage, he seemed most upset about the lack of accuracy, going 15-for-33 (45.5 percent) for 155 yards and a 59.5 passer rating.

“I don’t know what the hell that was,” he told reporters after the game. “I just have to pick it up.”

Mayfield didn’t look comfortable as the line had issues early. He never found a comfort level.

He mentioned a lack of rhythm, especially after coach Kevin Stefanski turned to the run, but he must get used to going awhile without a throw. The run game is clearly the identity of the team. Maybe it will change when receivers Odell Beckham Jr. and Jarvis Landry are healthy together, but at least for now, Nick Chubb and Kareem Hunt are the engine.

So Mayfield has to be efficient and effective when he gets his chances. He threw 33 times Sunday, so that’s plenty to find his timing.

Mayfield’s last throw was a miss to Beckham (two catches, 27 yards; one run, 4 yards), who was behind the defense for what could’ve been an easy touchdown. Mayfield blamed this missed connection on miscommunication.

He said he should’ve made it clear to Beckham what he wanted, implying he wanted him to stop after getting open down the sideline. A completion would’ve won the game and a touchdown wasn’t necessary.

Mayfield’s attitude after the game hit the right notes. He was tough on himself but celebrated the hard-fought win.

Williams deserved his own category.

In his first start since 2019 — rookie Greg Newsome II was out with a calf injury — he was a key piece of the key unit. The secondary put the clamps on the dangerous wideout trio of Jefferson, Adam Thielen and K.J. Osborn. Jefferson finished with six catches for 84 yards and the touchdown, Thielen three for 46 and Osborn three for 26.

Williams thwarted one fourth-quarter drive by himself with an interception of a deep corner route intended for Thielen. He read the play properly, did his job and made a good play on the ball.

He ended a drought that had left him exasperated. His last interception came Sept. 15, 2018, as his LSU Tigers beat Auburn.

He was frustrated when he didn’t get one as a rookie in 2019, then missed all of last season with a nerve injury in his shoulder. His teammates were thrilled for his success.

“It’s really crazy because I didn’t even think I was going to be standing right here,” Williams said. “The injury I had, just going around trying to find out how to heal it up faster, it was just a journey.”

Williams’ day was a reminder of how critical cornerback depth is. The Browns barely missed a beat without Newsome because they consider Williams a starter.

Stefanski was aggressive again in his decision-making.

Get used to it.

On the first possession, he went for it on fourth-and-4 from the 6. Mayfield looked right, none of the three targets was open and he was sacked for an 11-yard loss. The offense failed on fourth down twice in the first quarter last week in the 26-6 win over the Bears.

Stefanski went again late in the second quarter on fourth-and-goal from the 2. A defensive holding penalty extended the drive, and the Browns finally capitalized with a 1-yard run by Kareem Hunt.

Stefanski wasn’t done forcing the action. Vikings defensive tackle Sheldon Richardson, who spent the last two years with the Browns, was penalized on the extra point for calling a timeout the Vikings didn’t have. Stefanski accepted the penalty and went for the 2-point conversion from the 1-yard line.

Mayfield threw to fullback Andy Janovich off play-action for an 8-7 lead.

The data the Browns compile and study say going for touchdowns and 2 points is often worth the risk. When Stefanski marries that with his trust in the offense and his play calls, fans should be ready to buckle up.

Side note: Richardson wasn’t really to blame. A teammate was trying to run off the field and would’ve drawn a flag if Richardson hadn’t called timeout.

The time has probably come to sit left tackle Jedrick Wills Jr. for a week or two so his injured left ankle can recover. The Browns are trying to toughen him up, but he’s been unable to finish three straight games and has struggled when he’s on the field.

Veteran Chris Hubbard might be able to go next week after missing three games with a triceps injury, which would keep rookie fourth-rounder James Hudson III from having to start against Chargers pass rusher Joey Bosa.

** Stefanski had a rough day with the challenge flag. He wasted a challenge on a sideline completion by the Vikings, then didn’t challenge the spot on a third-down Mayfield scramble that appeared to be a first down. A Hudson false start on fourth-and-1 forced Stefanski to punt.

Browns-Vikings Preview: 3 things to watch, 3 key numbers, the prediction
Commentary: Ugly win could prove to be beautiful for Browns, as defense bails out misfiring Baker Mayfield