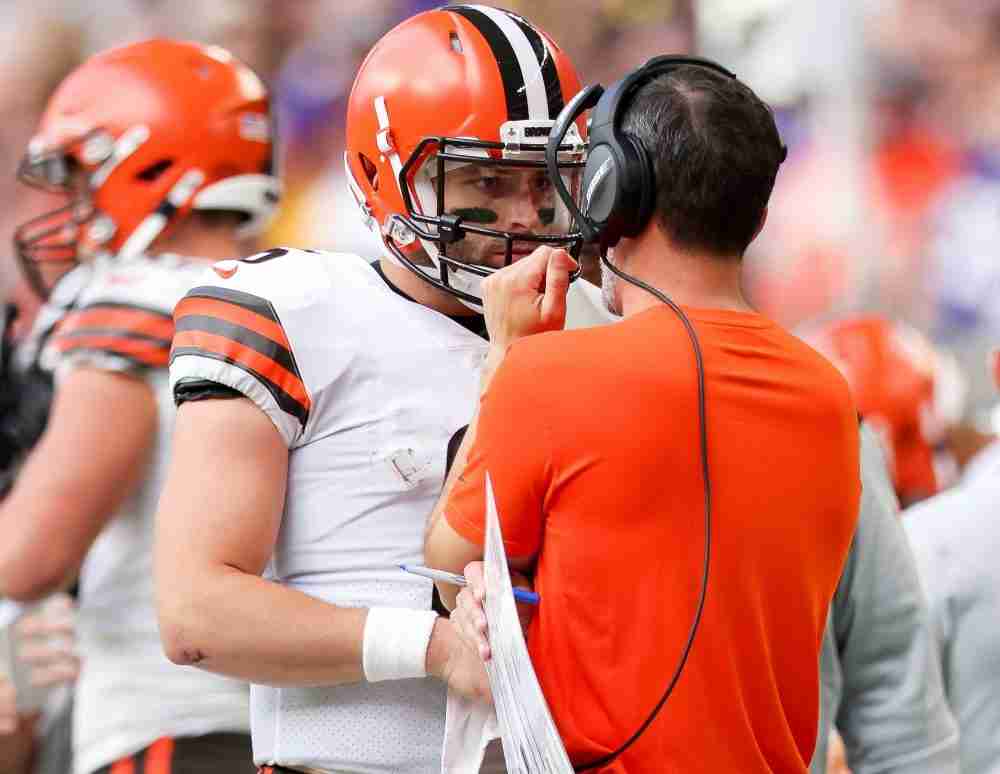 He didn’t freak out five weeks later after a 38-7 drilling in Pittsburgh in which Baker Mayfield went 10-for-18 with 119 yards, a touchdown, two interceptions, four sacks, a 54.9 passer rating and was pulled to avoid further punishment.

The even-keeled one certainly isn’t going to overreact after a hard-fought 14-7 win Sunday in Minnesota, no matter how many bad passes Mayfield threw. And there were a lot of them.

It makes no sense for Stefanski to convey any sense of worry after a 3-1 start that has the Browns tied for first place in the AFC North with the resilient Ravens and surprising Bengals. Quarterbacks have bad games — Aaron Rodgers completed 54 percent for 133 yards with two interceptions and a 36.8 passer rating in a Week 1 loss to the Saints — and offenses struggle, and it’s a great sign of defensive growth and organizational strength that the Browns won despite scoring one touchdown.

As I wait impatiently for Stefanski’s steady demeanor to spread throughout the fan base, it’s fair to wonder just how alarmed people should be after Mayfield’s latest clunker.

And it was certainly a clunker.

He completed just 15 of 33 passes for 155 yards, and the 45.5 completion percentage is the third-lowest of his four-year career. The two worse outings came in 2019 under coach Freddie Kitchens.

The incompletions included throwaways under pressure or with no one open and a couple of drops by tight end Austin Hooper, but as the game wore on Mayfield’s misfires were the problem.

He badly overthrew Odell Beckham Jr. in the corner of the end zone. He threw wide for Rashard Higgins. He underthrew Beckham as he stepped up in the pocket. He overthrew tight end Harrison Bryant on a corner route, which looked a lot like a miss the previous week in the win over the Bears. He threw a sideline route for Beckham out of bounds.

“We know that we want to be better in the pass game,” Stefanski said Monday on a Zoom call. “We want to be more explosive in the pass game. There will be opportunities for us to improve, and that is what this week is really for is making sure that we are getting on the same page and then having a good plan for the Chargers.”

He wasn’t interested in getting into the mechanical specifics of Mayfield’s struggles.

He’s right about those calls and a few others where Mayfield’s first reads were covered. But Mayfield had chances to ice the victory late and didn’t take advantage.

He and Stefanski blamed miscommunication for the final miss to Beckham, but Mayfield knows the late throws often win or lose games.

“That’s the type of dagger you need to have on offense to put it away,” he said after the game. “Kind of like last week with Harrison Bryant’s far cross and it sailed over him.”

When Mayfield misses it tends to be high or long. This was apparent last year, throughout training camp this year and definitely Sunday. Maybe it’s because he throws from high on his toes to raise his arm angle to compensate for the lack of ideal height, but he’s got to be more consistent in this area.

“There’s a lot of easy throws there that I think I missed,” he said.

“I don’t think so, based on what I see at practice,” Stefanski said.

Something has changed over the last two weeks. Mayfield led the league through two games with an 81.6 completion percentage. He’s fallen to 18th at 65.5 percent.

Mayfield played too well over the second half of last season and in the two playoff games for one game — especially a win — to send people jumping off the bandwagon. It also shouldn’t affect the organization’s plans to sign him to a long-term, big-money extension.

The simple solution is a quick bounce-back, ideally Sunday in Los Angeles against the Chargers and quarterback Justin Herbert, who broke Mayfield’s rookie touchdown record last year. Mayfield’s thrown only two touchdowns this season — to Hooper and running back/receiver Demetric Felton — and could use a dynamic and precise performance to show everyone, including the defense, that he can take over games, too.

A few more completions to Beckham would help. After connecting five times for a team-high 77 yards in Beckham’s season debut against the Bears, he caught two passes in seven targets for 27 yards against the Vikings.

The last incompletion was a miscommunication, but three of the other four were wayward throws. The other could’ve been called pass interference in the end zone.

“That is not really a concern of mine or ours,” he said. “When you throw the ball deep, you are not going to hit all of those. We had some opportunities where we felt like we could throw it deep, and we just did not connect.”

Mayfield often plays his best when he feels like he has something to prove. Stefanski will spend the week designing plays to get him easy completions and in a rhythm. They’ll take extra time to make sure Mayfield and Beckham are on the same page.

It’s too early to be alarmed. Check back next week if Mayfield plays like that again.

Commentary: Ugly win could prove to be beautiful for Browns, as defense bails out misfiring Baker Mayfield
Analysis: Fierce front four can lead defense to greatness