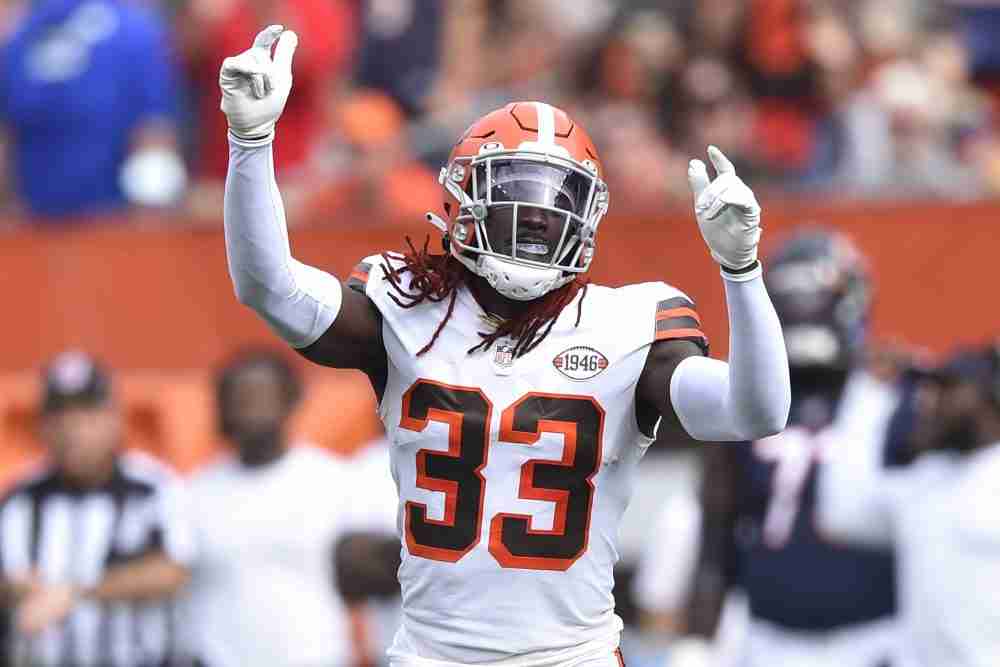 From his spot in the deep middle, free safety John Johnson III has a great view of defensive tackles Malik Jackson and Malik McDowell.

He likes what he’s seen.

“Oh, those two dudes, man, they get after it,” Johnson said Monday on Zoom. “I saw it a few times there was a little bit after the play. Luckily we didn’t get a flag, but it’s just that rushing, it’s violent, it’s physical and they love it.

“They like pushing guys 5 yards into the backfield. It’s so much fun in the back to see, just watching it all go down. Those two guys have been big for us and they’re going to continue to do that. It’s just that mentality that they have, they just want to attack people.”

The Maliks were part of a suffocating defensive effort Sunday in the 14-7 road win over the Vikings. They each had two tackles and two quarterback hits, and Jackson added two batted passes.

The Browns hit quarterback Kirk Cousins 10 times, sacked him twice and held the running attack to 65 yards and a 2.8 average. The 266 rushing yards allowed are the fewest in franchise history through four games.

“We just go out there and I tell him every time before we step out on the field, ‘It is us. Let’s go out here and do this. We should not even have to have the other two guys.  It is just me and him. Let us just go out there and play mean, play hard, get to the ball and take no BS,’” Jackson said. “Malik is a big boy. He is a brawler. He wants to get in there and just push you around.

“I try to just be a little more finessed with my pass rushes. He wants to get in there and push you around, put you on your butt and dominate you. He is big.”

The Browns took a chance of McDowell as a free agent in April and he earned a starting role with a strong preseason. He was penalized for roughing the passer after a low tackle of Cousins.

“He is really learning the game fast, learning what Coach wants and learning the system fast,” Jackson said. “We are really just starting to gel, really understand each other and really getting that work through the week to get to Sundays. It is really coming together on Sundays.”

“I think it is just trusting one another to do each’s 1/11th job,” Johnson said. “The first few weeks, I would not say freestyling, but it was kind of like we were just all out there playing defense and running around like chickens with our heads cut off. Now we are actually like, ‘OK, I am going to lock in. I am going to do my job and do my assignment,’ and it is really paying off.”

Johnson said it took awhile for him to get used to playing strictly in the post, as opposed to moving around the defense like he did with the Rams. He sees big things ahead for the entire unit.

“I think we are just scratching the surface,” he said. “We really need to hone in on taking the ball away and even scoring on defense.”

Safety Ronnie Harrison Jr. will be ready to practice this week and face the Chargers on Sunday in Los Angeles.

He missed all but the first two snaps Sunday in concussion protocol, but doctors determined Monday morning he didn’t have a concussion.

Harrison made a tackle along the sideline on the second play then walked to the bench. He was taken to the locker room and evaluated. He cleared the protocol Monday.

Grant Delpit replaced Harrison and played well. He had two tackles and a diving pass breakup that was negated by a penalty elsewhere.

“He’s a ballplayer,” Johnson said of Delpit. “Even plays that he doesn’t make, he’s running to the ball as fast as he can. He wants to get his nose in the play.

Stefanski didn’t have the results of an MRI on left tackle Jedrick Wills Jr.’s left ankle. Wills was originally hurt in the opener. He started the last three games but had to leave each.

He left Sunday in the third quarter after he and tight end Harrison Bryant got their feet caught and the ankle was aggravated. Wills didn’t return.

Stefanski was asked if the team will sit Wills for a while to let the ankle recover.

“Everything’s on the table there,’ he said. “We’ll see how he is with this ankle and see how he does throughout the week.”

Veteran Chris Hubbard would be an option to replace Wills if Hubbard’s healthy. He missed the last three games with a triceps injury.

“Chris Hubbard is getting better and making progress,” Stefanski said.

“He was OK,” Stefanski said. “He had a false start penalty there. He is progressing and working really hard.”

** Middle linebacker Anthony Walker Jr. (hamstring) is eligible to come off injured reserve this week but might not be ready.

Cornerback Greedy Williams’ first start since 2019 included his first NFL interception. The second-round pick in 2019 missed all of last season with nerve damage in his shoulder.

“I am really proud of Greedy,” Stefanski said. “It was a hard year with that injury, a lot of waiting and a lot of getting work in the training room and in the weight room, and finally got good news after really weeks and months.

“He came back, and the guy has just been so singularly focused on helping this team win. To see him out there, play well, play physical and get his hands on guys — that is a really good passing unit out there — he was up to the challenge.”

The Browns failed on fourth-and-4 on their first drive, and Stefanski said he went for it in part because he expected the game to be high-scoring and thought they’d need touchdowns to win.

** Stefanski said his staff didn’t see a good replay of the Vikings catch down the sideline in the second quarter but he felt it was a big enough play to quickly challenge and didn’t mind losing a first-half timeout. He lost the challenge.

He said they also didn’t have a great look at quarterback Baker Mayfield’s dive toward a first down that he chose not to challenge in the second half.

Defensive end Myles Garrett said in an on-field TV interview he had a gift back home for Stefanski to commemorate the win against his former team. Stefanski said he hadn’t received it.

“He does not owe me anything after that performance,” Stefanski said. “He just needs to bottle that up and do that every week.”

** Receiver Lawrence Cager was signed to the practice squad.