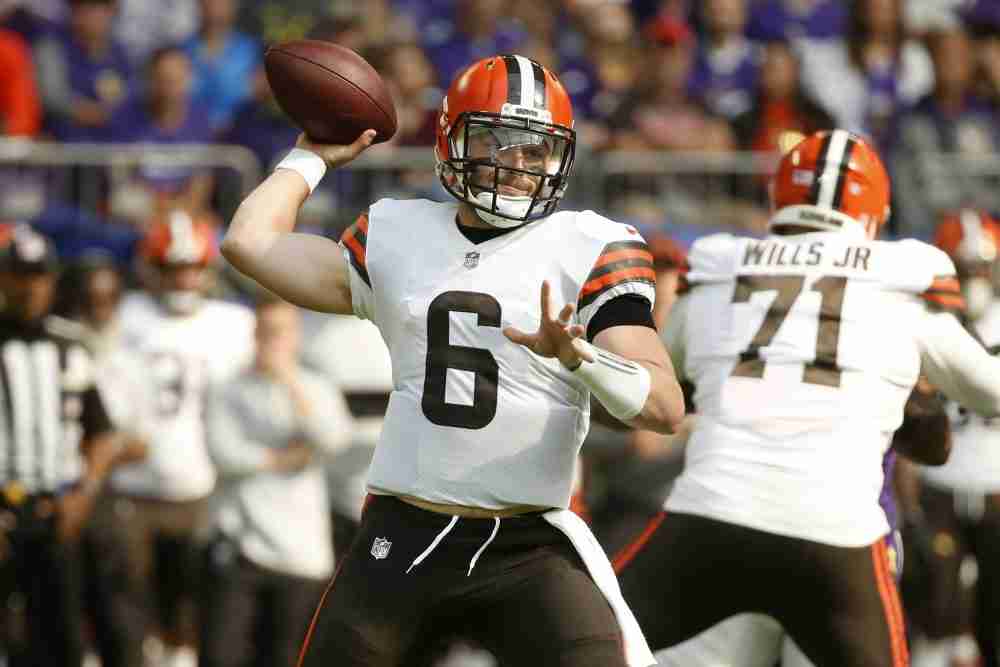 BEREA — Baker Mayfield wasn’t interested in analyzing each missed throw or considering every conceivable reason for his self-described “piss-poor” performance Sunday in the 14-7 win over the Vikings.

“It’s just about making the plays when they’re there,” he said Wednesday. “I really don’t think it’s that complicated.

“Everybody’s going to try and make an excuse. I pretty much hit on it after the game, just gotta make the damn play. It’s that simple.”

Mayfield didn’t make nearly enough but was bailed out by the defense as the Browns improved to 3-1. He went 15-for-33 (45.5 percent) for 155 yards and a 59.5 passer rating, and was most bothered by the inaccuracy.

“Missing the throws, and then the same problems,” he said. “Hitting the guys that are open, taking what’s there. Yeah, just gotta get it corrected.”

He said his footwork was “clean” and again declined to blame the left (non-throwing) shoulder injury suffered Week 2 when he tried to make a tackle against the Texans after an interception. He did acknowledge he’s wearing a harness and was asked if it affects his throwing.

The incompletions included throwaways and a couple of drops but way too many errant passes. He pointed to a pair of overthrows — in the red zone for receiver Odell Beckham Jr. and a deep out for tight end Harrison Bryant.

“Just gotta hit those,” he said.

“You can always point your finger at a few things, but we missed a couple of guys, and we are going to work really hard to make sure we hit them this week,” he said. “I have seen Baker have great success in games, and I have no doubt that we will work at it this week.”

Mayfield led the NFL with an 81.6 completion percentage through two games but has dropped to 18th at 65.5 percent, which is higher than the 62.1 percent for his career. He’s thrown for 935 yards, two touchdowns, two interceptions, 8.3 yards an attempt and an 89.7 rating.

Four of those were intended for Beckham and therefore will draw greater scrutiny. Beckham was open each time.

Mayfield overthrew him in the end zone for what should’ve been a 3-yard touchdown, underthrew him on a deep pass down the sideline after stepping up in the pocket and not having his feet set, threw out of bounds on another route down the sideline and had a miscommunication on a late third-and-5 that would’ve sealed the victory.

On the last miss, which came with Beckham wide open, Mayfield was wary of the deep safety and threw to an open spot. Beckham saw the safety move toward rookie receiver Anthony Schwartz over the middle and kept running down the sideline.

“It’s probably about a quarter of a second off from me being able to see the safety attach back on to Schwartz instead of playing over the top,” Mayfield said.

#Browns Baker Mayfield on the late incompletion to OBJ. pic.twitter.com/QFDTiInPDn

Beckham had two catches in seven targets for 27 yards. He had five catches in nine targets for a team-high 77 yards the previous week in the 26-6 win over the Bears in his return from a torn anterior cruciate ligament.

Mayfield and Beckham had issues connecting in 2019 and early last year. They devoted a lot of time in the offseason and training camp to developing a better relationship on and off the field but will benefit from more game action.

“It’s definitely different timing when it comes to game reps when I’m having to get the ball out with guys barreling down and he’s seeing a different thing,” Mayfield said. “His game speed is a little bit different, too, so there’s definitely that, but we have to take advantage of our opportunities and it starts with me.”

Whenever there’s a lack of on-field success, questions are asked about a perceived lack of chemistry between Mayfield and Beckham. Stefanski said the seven completions in 16 targets isn’t a concern.

“It really is not,” he said. “It is a concern any time we do not have a completion, but the amount of balls we are throwing down the field, in particular to Odell, I think you have to be realistic about what that completion percentage can be.

Mayfield said he went through his progressions correctly “for the most part,” but was kicking himself for not seeing Demetric Felton wide open in the flat on a third-and-2 to start the third quarter. Mayfield kept the ball, was sacked and the Browns punted

“Yeah, that’s one of our keeper, naked, or whatever you want to call it, the read is going outside and going back inside and back out,” he said. “That’s one of those where the corner was giving body presence at first and then fell off late and he’s still there by himself. It’s one of those I’d like to have back for sure.”

The questions about Mayfield’s bad game will continue until he rebounds, possibly Sunday in Los Angeles against the Chargers.

“I’ve already turned (the page),” he said. “Fix the mistakes, go back and correct it, that’s what I’ve always done.”

Later in the day he took to Instagram to remind everyone he has the “mental and physical strength” to grow from adversity. He added “winning is the priority for me.”

“It’s Baker. He’s going to come out here, he’s going to have a good day of work,” he said. “We all trust in him. We’ve all been there. I’ve been there plenty of times. It’s just about the bounce-back, which he always has, and so I know we all trust in that and believe in him.”