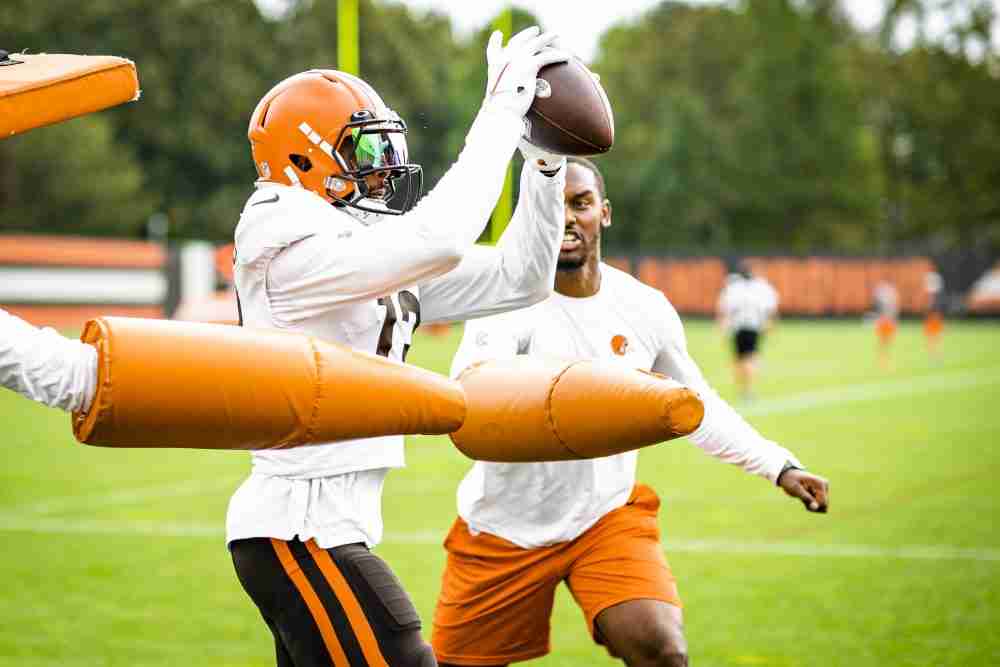 Although he said he doesn’t feel the pressure to hit on a deep ball, he expects the dam to bust open once it happens.

“For me, the type of person I am, once I connect, I’m going to be like, yeah, 20 more of them, you know what I mean?” Beckham said Thursday. “So it’s gonna come. It’s gonna happen. Just stay patient.”

Beckham has nine catches in 16 targets for 104 yards in the pair of wins that pushed the Browns’ record to 3-1. He got behind the coverage a couple of times Sunday in the 14-7 win over the Vikings, but Mayfield underthrew him on one as he stepped up in the pocket and they got their wires crossed on the other.

Beckham, who had two catches for 27 yards, isn’t buying the narrative of a continued lack of chemistry between the two.

“I don’t really know if there’s a (lack of) — that word keeps being thrown around — like chemistry, as much as just second game back.”

“They were very close,” Van Pelt said. “Really, if you complete two of those throws, Odell is well over 100 yards, and everybody’s not saying a word.

“Deep balls are tough to complete. Your completion percentage is lower on those. But we were just off a hair.”

Beckham was asked how many touchdowns he could’ve had against the Vikings and said he’s not looking into the past. He stressed he’s excited to be playing again and is thankful to be playing Sunday against the Chargers in Los Angeles, and on a contending team.

“We’re finding ways to win games, which it’s crazy,” he said. “I’ve been in the NFL now it’s going on eight years and I’ve seen enough football to know the teams that are going to come away and win games and the teams that wouldn’t win a game like that. And we’re a team that can overcome all those obstacles.

“And that’s just the bottom line is this team each and every Sunday is most likely gonna win. The goal is to win and I think we have a great team. When it all starts clicking, then I’m sure you might see 40 points up there. If not, still find a way to win.”

The exhaustion Beckham talked about experiencing against the Bears in his return from a torn anterior cruciate ligament suffered Oct. 25 was gone against the Vikings. He got a second wind after the first quarter and was good to go.

“Yeah, it wasn’t the same,” he said. “I just felt better than I did the first game, where I felt like every single time I had to exert a lot of energy.”

He said his body responded well the Monday after both games.

“Pretty good, to be honest,” said Beckham, who played 52 snaps against the Bears and 62 against the Vikings. “As the game went on, I started to feel more and more in shape. My legs stated to come back underneath me. It’s only the second game after a long time of being out, so I actually don’t feel too bad.”

Rookie linebacker Jeremiah Owusu-Koramoah’s role will continue to expand because he’s earned the trust of coordinator Joe Woods, who was asked what Owusu-Koramoah’s done well to deserve more playing time.

“Everything, to be honest,” Woods said. “He is playing well in the run game. When he makes decisions, he makes them fast, and we say he shoots his gun. In the pass game, you can see his ability out in space just to make plays, whether he is in coverage or he is just making the open-field tackle.

“Just giving him a little bit more each week. We do not want to put too much on him, but he has definitely earned the right to get some more defenses.”

Owusu-Koramoah, a second-round pick out of Notre Dame, has 17 tackles, three passes defensed, a tackle for loss and a half-sack.

Cornerbacks Denzel Ward (neck) and Troy Hill (toe) returned to practice in a limited role after sitting out Wednesday, and Woods said he expected them to play Sunday.

** Defensive end Myles Garrett and defensive tackle Malik Jackson practiced after being given Wednesday off to rest. Garrett (knee/ankle) was limited, and Jackson was a full participant.

** Offensive lineman Chris Hubbard (triceps) also worked on the side after practicing in a limited role last week and Wednesday. He’s missed the last three games.

** Left tackle Jedrick Wills Jr. (ankle) and center JC Tretter (knee/back) didn’t practice and weren’t on the field during the portion of practice open to reporters.

** The Browns waived defensive end Joe Jackson. He had two tackles and a sack in four games as the No. 4 end.

The move is likely a good sign that Clowney and/or McKinley will play. Ifeadi Odenigbo will also move up the depth chart.

Priefer said Gillan had mis-hits in each of the last three games — in addition to the critical drop in the opener against the Chiefs — but settled down with six good kicks in the second half against the Vikings.

“That was going to be a field-position battle in that second half, and I thought he came through for us,” Priefer said.

Gillan’s first punt against the Vikings inside the dome went for 33 yards.

“His technique, it was like he was rushing for some reason and going too fast,” Priefer said. “We always talk about being quick and smooth as a holder and as a punter. He was quick, but he was not very smooth on that.”

Priefer said playing in a new venue like Los Angeles’ SoFi Stadium reminds him of the scene in “Hoosiers” when they walk into Hinkle Fieldhouse before the state championship.

“No, I do not bring my tape measure,” Priefer said, referring to the coach Normal Dale character measuring the distance from the floor to the basket. “I will bring my stopwatch. If I bring my tape measure, I might start crying because I love ‘Hoosiers.’ Jimmy Chitwood hits that shot, who doesn’t cry?”