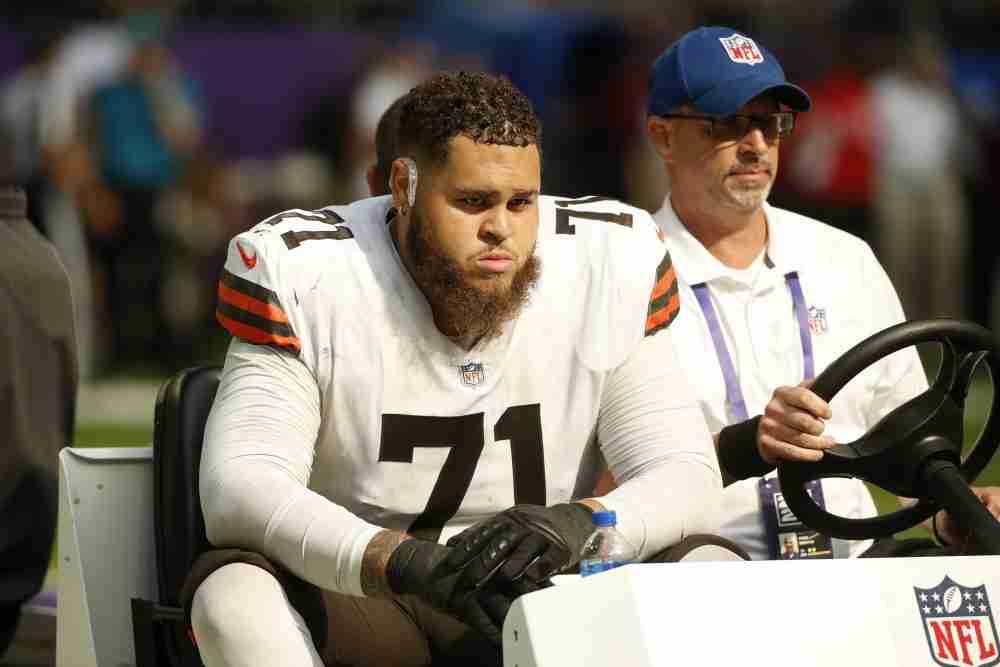 BEREA — The coaches are holding out hope left tackle Jedrick Wills Jr. can play Sunday against the Chargers despite a lingering ankle injury that prevented him from practicing all week. Wills was listed as questionable Friday on the official injury report.

Wills sprained the left ankle in the opening loss to the Chiefs but was able to start the next three games. He’s aggravated it at least twice in the games and was forced to leave all three at some point. He exited last week in the third quarter against the Vikings, was taken to the locker room and didn’t return.

“I love the way that he’s battled,” line coach Bill Callahan said Friday. “He practices hard, he pushes through. When you’re injured it’s constant 24-7 rehabbing. Coming into the room, he has his ice bucket right in the room.

“He’s continually rehabbing and addressing his injury to get better and he’s made great strides. I’m really hopeful for him that he’ll be ready.”

Wills was questionable before the last three games but started and played 77 percent of the total snaps. He didn’t practice Week 2 before the win over the Texans.

“I think he has a chance to play, but we will continue to evaluate him and use the next 48 hours to make that determination,” coach Kevin Stefanski said.

Veteran Chris Hubbard would normally be next in line, but he was ruled out for the fourth straight game with a triceps injury. NFL Network reported he’s expected to have season-ending surgery.

Hubbard’s quadriceps tore and his kneecap dislocated late last season, but he fought to make it back for the opener. He was hurt after replacing Wills against the Chiefs but finished the game.

“He’s still young and he’s still learning, but at least he has exposure to it and he’s seen it so it doesn’t freak him out in the middle of a game. He’s seen the full repertoire, trust me.”

Whoever plays left tackle will be challenged by Chargers edge rusher Joey Bosa. The Ohio State alum and No. 3 pick in 2016 lined up primarily over the right tackle Monday night in a win over the Raiders but moves around.

Bosa has 2.5 sacks this year and 50 in 67 career games. He’s a three-time Pro Bowler and was Defensive Rookie of the Year.

Bosa lines up as an outside linebacker in Los Angeles’ 3-4 base defense and plays end in the four-lineman nickel package.

“Joey’s just an elite pass rusher,” quarterback Baker Mayfield said. “He’s somebody that you really gotta know where he’s at. He’s a guy that can change a game.”

Garrett said he’ll play, while the rest are expected to play.

** Middle linebacker Anthony Walker Jr. ran sprints after practice and can be activated from injured reserve Saturday. He missed the last three games with a hamstring injury.

“He looked good to me out there and we’ll see over the next couple days,” Stefanski said of his availability.

** For the Chargers, backup running back Justin Jackson (groin) is doubtful. Cornerback Chris Harris Jr. (shoulder) is questionable but expected to play.

Mayfield will play despite the revelation Thursday the labrum in his left shoulder is partially torn. He hasn’t been listed on the injury report the last two weeks.

Stefanski was asked if there are potential concerns with Mayfield playing through the injury.

“I can’t speculate about what the concern would be,” he said. “I would just tell you, he has told you guys that it is not a concern of his, and I have watched him practice, and he has done a nice job.”

Mayfield looks to bounce back after going 15-for-33 for 155 yards against the Vikings. Stefanski said he doesn’t believe Mayfield has altered his throwing mechanics due to the injury or the harness he wears to stabilize and protect the shoulder.

First-year Chargers coach Brandon Staley credited Browns safety John Johnson III with helping him land the job. Staley was defensive coordinator with the Rams in 2020, and Johnson was part of the No. 1-ranked defense.

“JJ’s one of my favorites,” Staley told reporters. “I certainly wouldn’t be here if it weren’t for him. “I have so much respect for him and we’ll have a moment pregame.

“He’s the ultimate competitor. He earned every cent that he got and that’s what you want for your players. You can see what he’s done for that team in a short time. I know that they needed help in that secondary and he’s given them a bunch.”

Johnson signed a three-year, $33.75 million contract as a free agent in March.