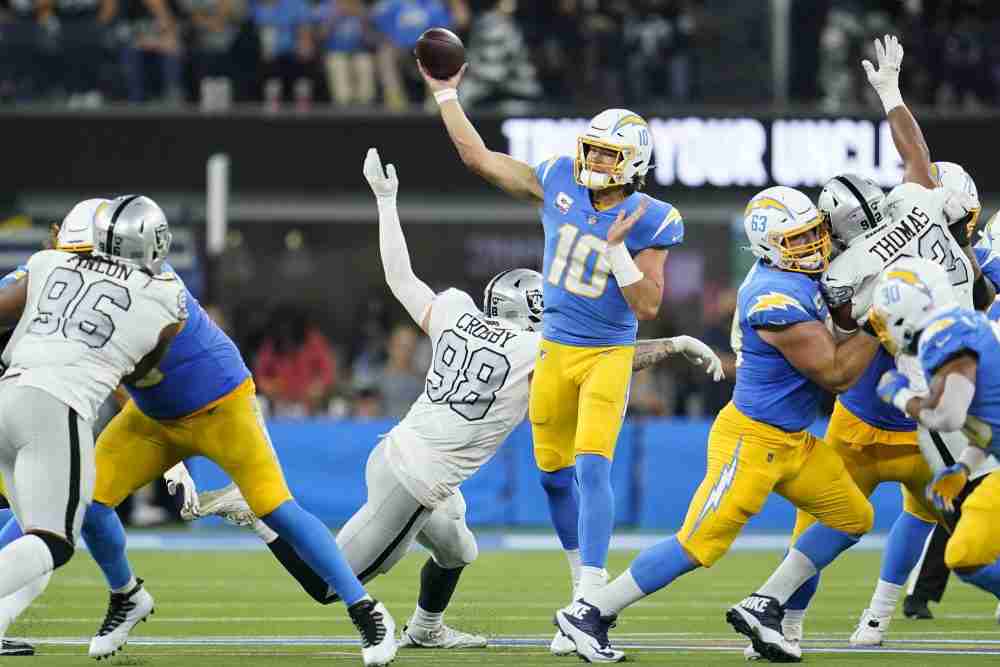 The Chargers’ passing game plays above the rim. Make that above the secondary.

Quarterback Justin Herbert is 6-foot-6, 236 pounds and surrounded by enough size to fill out a starting five in basketball. Receivers Keenan Allen (6-2, 211) and Mike Williams (6-4, 218) are joined by tight ends Jared Cook (6-5, 254) and Donald Parham Jr. (6-8, 237) to create nightmares for cornerbacks and safeties trying to match up in coverage.

The production is also sky-high. Herbert was Offensive Rookie of the Year in 2020 when he set rookie records with 31 passing touchdowns and 396 completions and was second all time with 4,336 yards. He’s been the best in the NFL on third down in his young career, completing 64 percent for 1,519 yards, 17 touchdowns and seven interceptions. Williams has 23 catches for 306 yards and four TDs, and Allen is tied for fifth in the league with 28 catches, for 294 yards and a TD.

“Great size. Great skill set throwing the ball. Athletic,” coach Kevin Stefanski said of Herbert. “He has good command of what they are doing and what they are asking him to do. He is spreading the ball around to a bunch of their playmakers. He is playing at a really high level.”

The Browns have the third-ranked passing defense (183.8 yards) and will play without starting cornerback Greg Newsome II (calf) for the second straight week. Greedy Williams had an interception in his place last week and is the team’s tallest corner at 6-2. Safeties Ronnie Harrison Jr. (6-3) and Grant Delpit (6-3) have good size, but Denzel Ward (5-11) and nickelback Troy Hill (5-11) will need strong technique to negate the height disadvantage.

The battle of 3-1 teams features two of the league’s premier pass rushers, either of whom can take over a game. Cleveland’s Myles Garrett leads the league with six sacks and has 48.5 in 55 career games after being the No. 1 pick in 2017 out of Texas A&M. Los Angeles’ Joey Bosa, the No. 3 pick in 2016 out of Ohio State, has 50 sacks in 67 games, including 2.5 in four games this year. He had a sack and a forced fumble Monday night in a win over the Raiders.

“It’s not me vs. Joey,” said Garrett, who will play despite missing practice Friday with nagging knee and ankle injuries. “It’s our defense vs. theirs and our offensive line vs. their offensive line — who can outperform who and make the plays they need to make to win the game. I like Joey, I like his game and I want to go out there and make the most positive impact I can. But that all fits in the scheme and if the individual stats aren’t there but I’m being disruptive and we have a great game all around, that’s what matters most.”

Garrett and the rest of the Cleveland front four have been dominant in the last two games. The next step for the improving defense is to get takeaways. It has only two interceptions and no fumble recoveries and would really benefit from Garrett stripping Herbert or forcing him into throws he doesn’t want to make.

“It’s just on the TV screens, we see Coach put it on there throughout the week, so we definitely know,” Delpit said of the lack of takeaways.

Bosa will likely spend much of the day against All-Pro right tackle Jack Conklin, but he could move to the other side, where the Browns have issues at left tackle. Starter Jedrick Wills Jr. was ruled out Saturday with a lingering ankle injury, so rookie fourth-rounder James Hudson III will likely make his first NFL start.

Jedrick Wills Jr. downgraded to out, won’t play vs. Chargers

But Stefanski has reason to go with a different script at the start of the game. He likes to loosen up defenses and get a lead with the pass, and he wants to get quarterback Baker Mayfield into a rhythm and help him rebound from the 15-for-33 performance against the Vikings.

Even if Mayfield finds his form, Stefanski will eventually turn to his trusted backfield. The Browns also lead the league with nine rushing TDs and 41 rushing first downs and are second with a time of possession of 34:21. Chubb is second in the league with 362 rushing yards, and Hunt is 21st with 355 yards from scrimmage.

“It’s tough for a defensive coordinator or defenses in general to handle that from like a pride standpoint,” receiver Odell Beckham Jr. said. “Like a team just running the ball just up and down the field as they please. You got two top dawgs back there, can hand it off to either one of them at any point in the game and they’re going to get yards. So I love seeing it.”

The Chargers’ ranking vs. the run is misleading. They allowed 126 yards in the opener against Washington and only 48 against the Raiders last week, but 198 against the Cowboys and 186 vs. the Chiefs when they were committed to stopping the pass and invited the run. They won’t use that approach against the Browns.

“They’ve been playing really well the last two weeks, so that’s all you can go off of,” Chubb said.

Player in NFL history with 500 catches and 7,000 receiving yards in his first 85 games. Odell Beckham Jr. can join Julio Jones in that exclusive club with six catches and 66 yards in game No. 85.

Career touchdown catches by Los Angeles’ Austin Ekeler, the most for an undrafted running back in the common draft era. He rushed for a career-high 117 yards Monday night.

Points allowed by the Browns in the last 10 quarters.

Baker Mayfield bounces back, the defense makes just enough plays and Cleveland gets a win in front of a crowd that will be loaded with Browns fans. Browns 27, Chargers 26.

Analysis: Fierce front four can lead defense to greatness
Commentary: To take next step, Browns must prove they can beat good teams